Game of Thrones is about war, death, betrayal, love, loss, dragons, and undead. But mostly it’s about family.

No where was family more pronounced than in season seven’s finale, “The Dragon and the Wolf.” Some families split apart, some hashed out old wounds, some came together (JOKES!).

Most of these family squabbles feel petty in comparison to the army of death that officially crosses over beyond the wall during the finale’s thrilling, yet predictable final moments. In the wise words of Bronn of the Blackwater, “We’re fucked.”

The marquis event of the series took up about half of the lengthy extended run time: the truce meeting in King’s Landing. There was a staggering amount of big names in a single scene together. 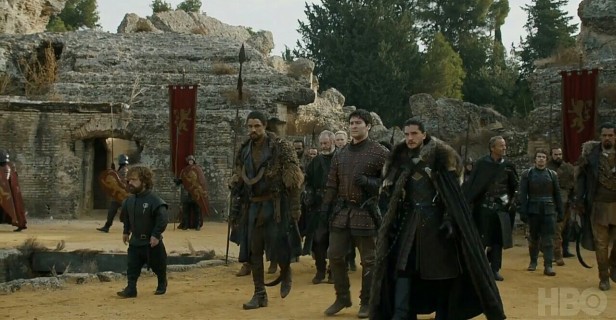 By my count the following characters were present during the meeting:

That’s crazy! It was fun to see so many characters in a single scene together, yet it was almost entirely drama-free. Daenerys arrived on Drogon, because of course she did. Sandor had some choice words with Gregor. Euron exchanged pithy remarks with Tyrion. Cersei and Daenerys, well you get the idea.

The undead soldier plan actually went off perfectly. All credit to Lena Headey during these scenes as she looked visibly shaken, then resolved. She played everyone in this meeting, including Jaime and me.

Alas Jon’s sense of honor gets him into a bit of hot water. Cersei appears to agree to an armistice as long as Jon agrees to take no sides in the Cersei-Dany conflict.

Jon refuses, revealing that he’s officially bent the knee to the Mother of Dragons. That’s definitely news to everyone on his side who practically all facepalm in unison.

Cersei is livid, throws up the proverbial middle finger and leaves in a huff. At least Jaime appears moved – I loved that blanched look he gave Jon when asked about how many are out there. But Cersei’s the boss and he dutifully follows her, for now.

Tyrion is Jaime’s weakness and soft spot, so when Tyrion decides to pay a private visit to Cersei, he agrees to make it happen.

The scene between Cersei and Tyrion was fantastic. This season has moved so quickly and thrown so much action at us that we’ve barely had time to just sit in a room and watch two great actors together.

Cersei hates Tyrion for killing their father and ruining their family. I was upset how despondent and near-suicidal Tyrion appeared over it. Dude, you didn’t also kill her kids, stop blaming yourself for that! Cersei was the one that reactivated the militant clergy that ultimately brought about her downfall.

Tyrion realizes she’s pregnant and tires to inspire her to have something to fight for. It seems to work; Cersei marches her retinue back out to the meet and declares that she will help, despite no assurances from her opponents.

Jaime is pleased, than horrified when Cersei casually mentions that there’s no way in hell she’s going to help them. I had predicated that Jaime and Cersei would have a wedge thrown between them – I’m still calling Jaime as the one who has to kill her. But I thought he’d remain by her side in a conflicted state until the big moment, Darth Vader style.

Instead he finally finds a backbone. Maybe it was speaking to Brienne again, one of the few people he respects, who brazenly told him, “fuck loyalty.”

Cersei teeters toward madness mode and is ready to have Zombie Mountain cut him down. Jaime calls her bluff and leaves. He just leaves! 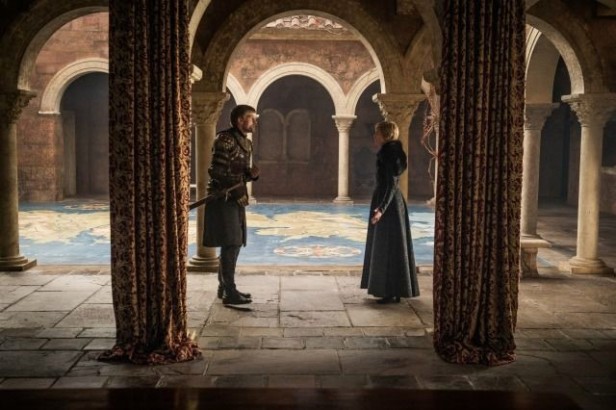 Presumably he’s on his way to defect and join up with Jon and Daenerys. I wonder if Bran will get a chance to tell everyone that Jaime was the one who tried to kill him all those years ago?

In a poignant moment of symbolism, the first flakes of snow began to fall on King’s Landing, signaling the Long Winter and the army of death that will come with it.

Our heroes return to Dragonstone and Dany and Jon continue to make goo goo eyes at each other as the show fast-tracks their romance. I don’t think the actors have any particular chemistry together and haven’t had much time to blossom. Their romantic pairing feels forced as a consequence.

Theon finally works up the courage to talk to Jon. Theon is a complicated character. He’s done very bad things, had very bad things done to him, tries to do the right thing lately, but is still mostly a sniveling coward. He lays much of himself bare before Jon, pleading to be absolved.

Theon uses his newfound resolve to march down to Yara’s Greyjoy defectors and declare they’re off to save Yara. Theon fails his Persuasion check and gets into a tussle, only to win the battle specifically because he lacks testicles. It’s a bizarre callback to Bronn making fun of the Unsullied as they waited outside King’s Landing earlier.

Theon wins and the Ironborn set off to rescue Yara. A finale is a weird time to start a completely separate Greyjoy subplot.

Cersei revealed that Euron’s abrupt departure was a feint – he was off to gather the Golden Company mercenary group from Essos. So does this mean Theon’s group will run into them? Where exactly is Yara anyway? This could potentially be really interesting if Theon/Yara’s group could disrupt Euron, and thus Cersei’s plans to bring in an entire army.

One subplot begins and another ends. At Winterfell we finally saw the resolution to the awful Sansa-Arya-Baelish drama. If anything has been a microcosm of the show’s weak writing since going beyond the books, look no further than Petyr Baelish trying to divide the Stark girls in a go-nowhere subplot.

Baelish does Baelish things by further manipulating Sansa, who appears frustratingly taken in by his seeds of mistrust and betrayal. But when she calls Arya to a dramatic meeting in front of everyone, she turns the tables on Littlefinger, accusing him of murder and treason. Littlefinger’s iconic reaction should absolutely replace Drew Scanlon’s blinking white guy meme.

I’m not sure Littlefinger deserved such a dramatic death. Yes he’s been a part of the show since the very first episode. But he’s had nothing to do since he took over the Eyrie back in season four.

It was satisfying that the Stark kids correctly blame him for starting the whole Stark-Lannister war. Sansa in particular deserves more than her share of justice.

Arya slits his throat like the cold-hearted badass she is, and it’s done. Hurray! Nothing brings together two sisters like murdering a conspirator. Now let’s leave this dumb drama behind and get ready for the war.

But first we need one more bit of family drama. As Jon and Dany make their way north to White Harbor and Winterfell, Sam has finally made it all the way from Oldtown to Winterfell (which nearly spans the entire continent). Clearly he didn’t acquire the fast-travel powers that everyone else possessed this season.

We don’t have much time left in the episode so Sam goes right to Bran, for some reason. It’s casually revealed by Bran that Jon is the bastard son of Rhaegar Targaryen and Lyanna Stark. Sam jumps in and takes all the credit for Gilly’s reveal earlier in the season: he wasn’t a bastard Sand but a true-born Targaryen, making him heir to the throne.

At the exact same time Jon pays Dany a visit in her cabin and they get their sexy time on, much to the cacophony of groans and eye rolls heard throughout the world. He’s your nephew! This is like if Luke and Leia got it on in the first Star Wars movie, ugh. Granted incest is far from a new concept in the show but still. AWKWARD, and doubly awkward to juxtapose his official reveal with their naked time.

We’re also treated to some past scenes of Rhaegar and Lyanna’s secret wedding, courtesy of Bran’s abilities. It’s another Dragon-Wolf combo!

I was imminently disappointed that Rhaegar looked exactly like Viserys. The writers then dropped a very confusing bomb for book-readers: Jon’s real name is Aegon Targaryen. Insert BewilderedLittlefinger.gif here.

In the latest book, Dance with Dragons (2011, lol), it’s revealed that baby Aegon (the son of Rhaegar and Ellaria Martell) survived the assassination attempt by Gregor, was protected and cultivated by Varys, and was quietly building an army and arriving in Westeros as a young boy.

That’s bullshit for many reasons and is one of the most frustrating elements of GRRM’s books – too many damn characters and subplots. So on the one hand I’m glad that character was eliminated in the show, on the other hand it’s a frustrating and confusing connection for the show to make.

With Jon and Dany headed to Winterfell there’s no question that Jon’s true heritage will be explained soon (AWKWAAARD). Hopefully it won’t act as needless drama the way the Starks-Littlefinger plot played out. I don’t see Jon acting any different or coveting the throne one he finds out. If anything it’ll solidify in Dany’s mind that he’s The One, and worthy to ride the other dragon, Rhaegal.

They’re going to need to fast-track that dragon-training. The episode ends with The Wall, which has stood for centuries, coming down in a few heavy blasts from the undead dragon Viserion. Tormund can only look on in horror as they don’t stand a chance to defend.

For everyone who answered the question, “how will the Night King’s army make it past The Wall,” with “by turning one of Dany’s dragons into a dracolich,” congrats! It was rather obvious after last week’s episode. 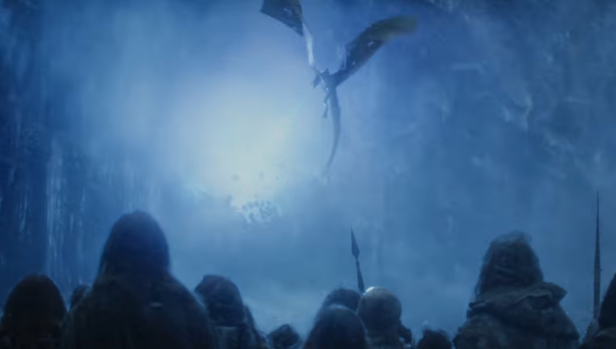 This season the show has devolved somewhat into a fan-service version of itself. That gives us a lot of satisfying moments and crazy cool action scenes, but also makes the show far more predictable and less shocking than it once was. We’re a far cry removed from the Red Wedding.

But hey, it’s hard to complain when I got to watch a god damn dracolich on big budget, mainstream TV.

The Wall is down, and the undead approach. Winterfell is practically within spitting distance. The show has overused the “omg the dead are coming” ending so many times it’s become trite. Yet, for real, they’re actually fucking here now. Hold on to your butts, and hope it doesn’t take another year plus for the final season to air.

Cersei – Lena Headey was on fire this episode. Cersei Lannister will go down in history as one of the all-time greatest villains. From “no one walks away from me” to her plans within plans. Nothing terribly dramatic or shocking, but she’s a delightful person to root against.

Jaime – Jaime is another richly complex character, though I feel the showrunners have done a poorer job of working through his redemptive arc than the books were doing. I’m glad he finally stood up to Cersei and I’m still calling it that he’ll be the one to end her reign. (I wish Bronn were with him though. Now I hope he and Poderick just sit in a tavern drinking for the rest of the series).

Incest – One incestuous relationship ends and another begins. Has there ever been a more awkward “will they won’t they oh god please no” than Dany and Jon?

The Wall – YOU HAD ONE JOB.