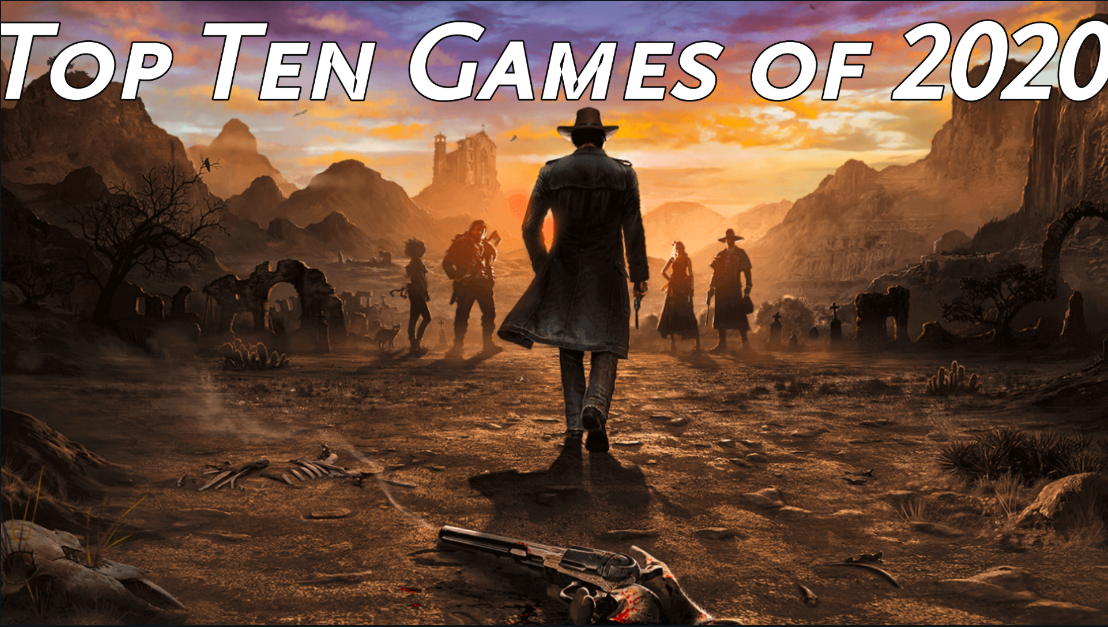 What can I say about 2020 that hasn’t already been said? It’s been a shit year, shadowed by a still-ongoing global pandemic that affects everything in our lives.

With social distancing, video games became more important than ever. This year saw the release of new consoles from Sony and Microsoft, a monumental occasion that only happens once every five or six years. The Nintendo Switch continues to dominate, though you’ll find far fewer Switch games on this year’s list compared to last year.

Indie gaming remained my bread and butter – especially a stellar run in the middle of the year when I live streamed new releases like Ori and the Will of the Wisps, Desperados 3, and XCOM: Chimera Squad.

Before we begin my Game of the Year countdown, let’s take a look at my Most Anticipated Games list from January. Here’s a reminder:

Three of those games wouldn’t launch in 2020 (BG3, Songs of Conquest, and Humankind), though I did live stream the Early Access version of Baldur’s Gate 3, and enjoyed it quite a bit – bugs and all.

Four of them I wouldn’t play this year. With everything going on, I wasn’t ever in the mood for the bleak violence of The Last of Us Part 2. Empire of Sin and Warcraft 3 Reforged both received poor reviews to keep me at bay. Only FF7R did I just not have time to pick up. Oops!

That leaves only three other games on this list that I did play – and all three made my list!

Without further delay, here are my top ten games of 2020.

Side-scrolling Beat ‘Em Ups were all the rage in the early 90s, and the Streets of Rage series was always the best – I still own my copy of Streets of Rage 3 on the Sega Genesis.

Streets of Rage 4 is the beautiful marriage of classic game design with modern sensibilities, like retrying a level at the cost of a lower score, rather than a Game Over screen. Fun story, attractive art, unlockable skins, and a killer soundtrack makes this everything I wanted from a sequel, in a series I didn’t know I wanted more of.

Monster Train is this year’s Slay the Spire, a roguelike deckbuilder that sucks hours of my life as I unlock new cards and try new strategies. Unlike Slay the Spire, Monster Train focuses on fewer but more meaningful battles, with three different lanes to play monsters and spells, and defend against those awful angelic armies.

Multiple factions focus on different strategies, like the tanky, defensive Awakened or the spell-focused Stygians, and each run includes choices on upgrades, artifacts, and random events. The one thing holding it back – it’s currently only on PC, and would make an awesome Switch game.

8) Journey to the Savage Planet

I’ll forgive if you missed this first-person sci-fi adventure back in January, but know this, Journey to the Savage Planet is one of the best games of the year. It’s basically Metroid Prime with a much cheerier disposition, and focuses on exploration over combat.

It’s a metroidvania where you gradually acquire upgrades and new tools to explore new regions and alien landscapes filled with secrets. It’s also legitimately funny and features two player co-op. One of the most underrated games of the year.

Chimera Squad was the biggest surprise for me this year. An XCOM spin-off that was only $10 on release? Chimera Squad replaces the custom, killable soldiers of the main series with integral party members, each with their own set of skills, not unlike an RPG.

The story is set in an interesting post-war time period that sees aliens and humans trying to work together amidst domestic terrorism. The scaled-down combat still leaves me wanting a proper XCOM 3, but Chimera Squad remains a successful and enjoyable spin-off.

Shadow Tactics: Blades of the Shogun was on my Top Ten list back in 2016. Developer Mimimi returned with Desperados 3, which is basically the same real-time stealth-tactics game in a Western setting.

The story and characters continue to impress and keep me engaged, and each of the large, lengthy missions are intricately designed for multiple viable strategies. With lighting-fast reloads, it’s a stealth game that rewards experimentation and puzzle-solving.

A lot has been said about Cyberpunk 2077. The oft-delayed, open-world, sci-fi RPG-shooter launched with a bevy of bugs that sets a new low standard for preorders, rendering the last-gen console experience nigh unplayable. Thankfully I’m playing on a mid-range PC and, despite some glaring flaws and limitations, am enjoying the hell out of this game.

Night City features a ridiculous amount of content on every city block, the perk system makes leveling fun, and I’m really enjoying the main campaign and all the quirky characters I get to work with. This is not cyberpunk via Skyrim or Grand Theft Auto, and the hype was grossly misplaced, but it’s well-deserving of a spot on my Top Ten list.

4) Ori and the Will of the Wisps

It’s been five long years since I fell in love with Ori and the Blind Forest. Ori and the Will of the Wisps meets and exceeds all my expectations for a sequel, with the same lovely art style and emotional storytelling of a forest spirit on a grand adventure.

The sequel maintains the fluid platforming that defines the metroidvania series while providing a ton of new abilities and weapons, and the welcome feature of quickly swapping loadouts. We’re also provided with a much richer world, with actual NPCs to interact with and complete quests for, along with a hub area to build up to earn rewards. Giving me exactly what I want, along with welcome new features, is the definition of an excellent sequel.

Yes, Immortals Fenyx Rising is Ubisoft’s unapologetic clone of The Legend of Zelda: Breath of the Wild. It says something about my gaming tastes when Immortals ranks #3 on my game of the year list (Breath of the Wild was my #1 in 2017).

It checks all the right boxes for a Zelda-like open-world adventure: dozens of mini-challenge dungeons, nearly endless collectables that increase health and stamina, and a colorful world with the perfect amount of distracting content at every distance. The writing is also delightfully funny and cute thanks to our omniscient narrators, Zeus and Prometheus, and Greek Mythology is always a fun theme to explore in a game.

Xenoblade Chronicles technically released back in 2010, but this HD remaster released in 2020, and I played it for the first time, and it’s making my top ten list, damn it. While I loved JRPGs back in the 90s, I’ve fallen off since then, with very few exceptions. I adored Xenoblade Chronicles X back in 2015, and with the Definitive Edition, finally had a great excuse to experience the original game.

I was not disappointed. I love the MMO-style zones and real-time, cool-down based combat. I missed the bigger open-world, giant mechs, and plethora of exchangeable party members of Xenoblade Chronicles X, but the original features a much, much better story with more memorable characters. I recently picked up Xenoblade Chronicles 2 as it’s looking like I finally found a modern JRPG series that I enjoy.

I’ve been a fan of Supergiant Games since Bastion, and both it and Transistor made my game of the year lists in their respective years. Pyre fell short for me, but Hades has to be my new favorite game from one of the best indie developers around.

Hades is a roguelike arena brawler. As the angsty son of Hades, Zagreus is trying to escape the underworld. On each run he can choose from one of six weapons, acquiring many different abilities, buffs, and bonuses from Greek gods and other infamous characters. In a smart evolution of the roguelike genre, death is common, but the story marches forward as you learn more about Zagreus’ plight and the tales of those around him.

Supergiant’s exemplary art, music, and character design has never been better – who would have thought an indie roguelike would feature one of the more gripping stories of the year? Even successfully completing a run doesn’t end the story, motivating me to continue to talk to my compatriots, unlock more abilities, and experiment with an endless combinations of weapon attacks and bonuses.

Most Played: Xenoblade Chronicles: Definitive Edition (overall it was my 3rd most played this year, behind older games Pillars of Eternity 2 and Persona 5)

Favorite New Game Mechanic: Talking to the denizens of the House of Hades between runs.

Thanks for reading, and have a happy New Year!