My ultimate year-end gaming post of lists and accolades. It’s the most wonderful time of the year – when game journalists come together to provide their hot takes on Game of the Year! I’ve been doing a personal top ten list for years, and enjoy comparing them to my Most Anticipated lists (from January) and Mid-Year lists (from June). I like lists.

Before we kick things off, let’s review my Most Anticipated Games of 2019 list, published January 2019. Keep in mind many games that released in 2019 weren’t even announced yet, while others were delayed into 2020.

I also published a Top Five Games of Mid-2019 list in June, which is usually a pretty strong indicator for my final top ten list:

Finally, here were my top five most anticipated games for the second half of 2019 (alphabetical) as of June 2019:

Now it’s time for my final end of year ranking. It was a heated battle for my favorite game of the year in 2019. For the first time ever I made it through the year without a clear #1, but in the end came away with a satisfying answer.

10) Remnant: From the Ashes 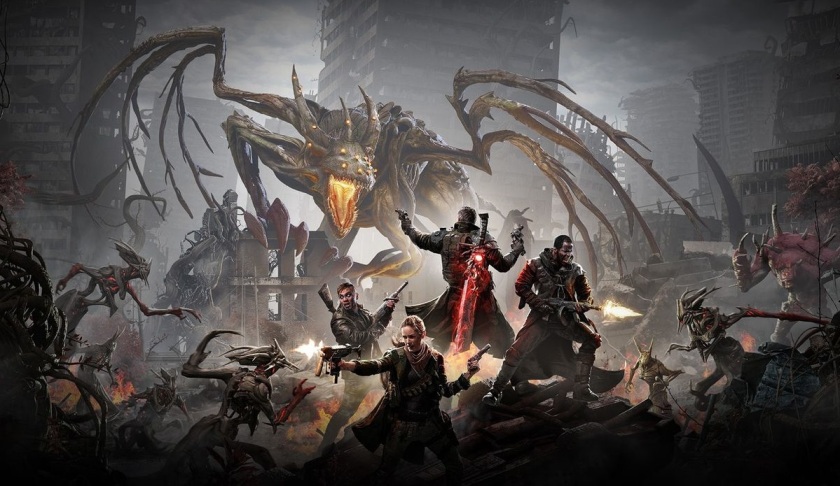 Remnant: From the Ashes squeaked onto my top ten list at the last second, when my friends and I realized we hadn’t been playing any co-op games in awhile, and picked it up during the Steam Autumn Sale. Remnant is a game I have a yet to play single-player, and have no real desire to try, but I’ve had an excellent time playing cooperatively. It’s best described as Left 4 Dead meets Dark Souls; challenging, intricate third-person combat, with an important focus on watching your teammates’ backs. Some boss battles alone have taken us entire evenings to conquer, but we always have a good time doing it. 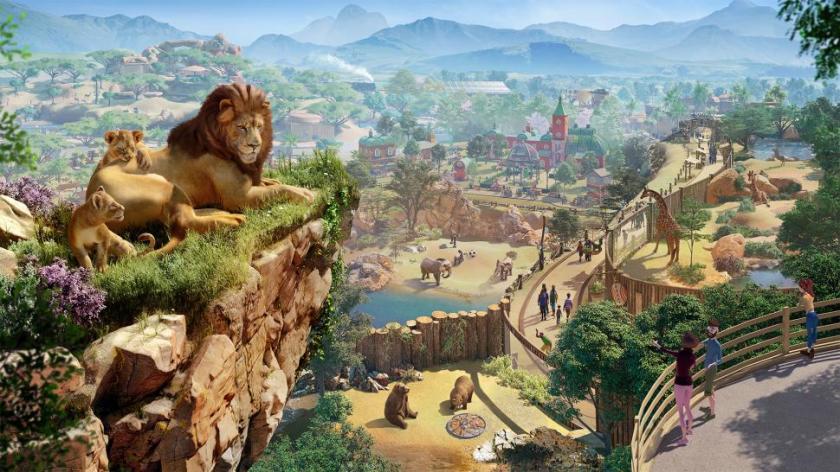 Even an impressive, well-polished zoo theme park game can’t quite compete to my love of dinosaurs with Frontier’s Jurassic Park Evolution (My #6 Game of 2018), but Planet Zoo is certainly good enough to warrant a spot on my Top Ten list. Planet Zoo combines the advanced animal AI from JPE with the advanced park management and customization from Planet Coaster, making it Frontier’s most impressive park sim to date. Planet Zoo‘s animal AI is as impressive as it is maddening, turning a theme park sim into part-time babysitting, but I can’t help but love the attention to detail, the emphasis on conservation and education, the gorgeous graphics, and multiple gameplay modes. 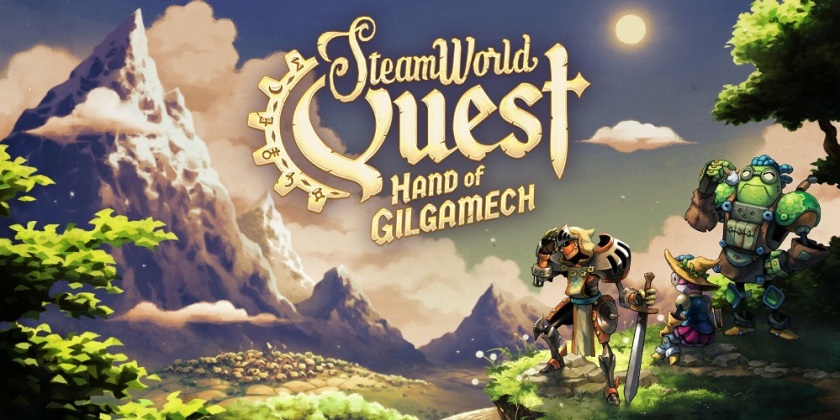 I’ve enjoyed Image & Form’s previous SteamWorld games, and respected the hell out of the fact that they’re all different genres, from Metroidvania to 2D XCOM. SteamWorld Quest is yet another genre, combining satisfying deckbuilding and card battling within a brightly colored side-scrolling RPG. It’s well-balanced and perfectly paced at around 20 hours, leading to one of the rare card games that actually has a legit story and characters. 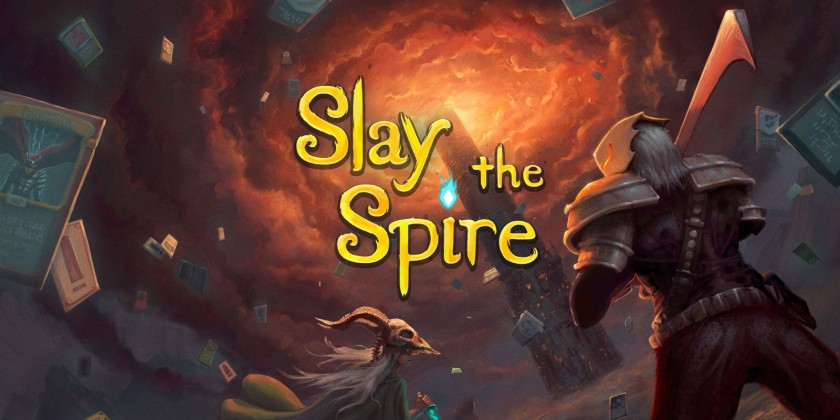 Of all the games on my Top Five Mid-Year list, Slay the Spire is the only one I’ve gone back to play since, and I a big reason is because it’s the perfect game to play on the Switch. The rogue-like deckbuilder is incredibly addicting and balanced to a razor’s edge for each of the three classes. I love playing through a run while cooking dinner and watching TV, testing out new strategies and card synergies, and seeing how far I get. I may not end up dumping dozens of hours into it, but I do plan on playing this one off and on throughout the next year. 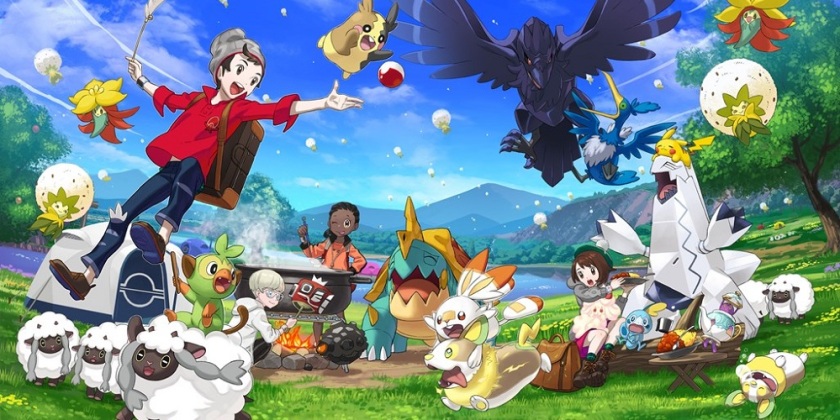 It’s no secret that the first main-line Pokémon game on a home console has been divisive for fans. Hell I wrote up a list of all the things I love – and hate, about Pokémon Sword and Shield. But there’s no denying that I’ve enjoyed the hell out of my time with the game. The Wild Area alone is amazing, a tantalizing tease of a truly open-world Pokémon game that I’ve been dreaming about for years, spending hours just wandering around catching pokémon, and the new Gen 8 pokémon are some of the best we’ve had in several generations. If Sword and Shield are the start of a new era of Pokemon games, we have a lot to be excited about. 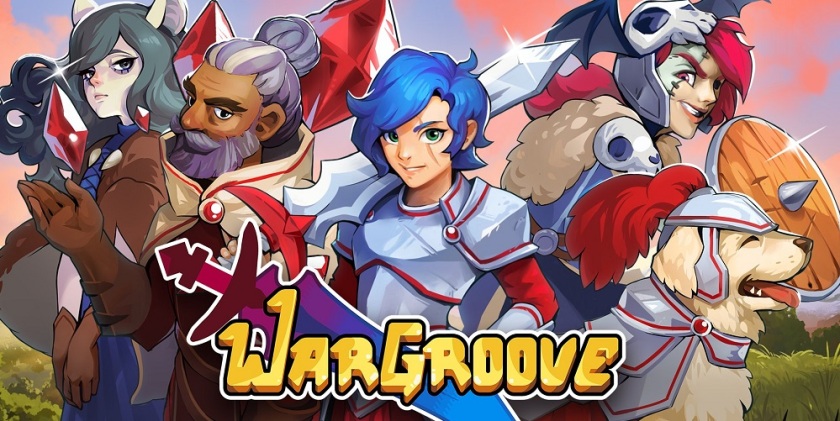 My favorite game of the mid-year fell a few places to the more flashier AAA games of the latter half, but Wargroove is still a phenomenal strategy game. It completely rips off Advance Wars in all the right ways, from its pixelated art style to its hard counter units, but with an original story and fantasy world filled with fun characters and factions. The campaign is astonishingly huge, and that’s on top of skirmish modes, puzzle modes, and a level editor, for all the pixelated warfare you could ask for. 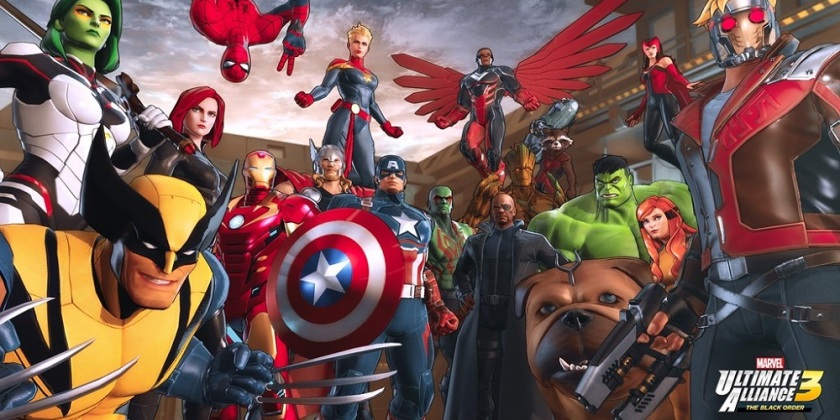 MUA 3 captures exactly what I loved about the older games – a customizable team of dozens of Marvel superheroes battling waves of bad guys, with just enough RPG elements, powers, and challenges to keep me locked in. MUA 3 dropped the ball a bit with its horrendous camera when playing couch co-op, otherwise this could have easily been my #1 game of the year. 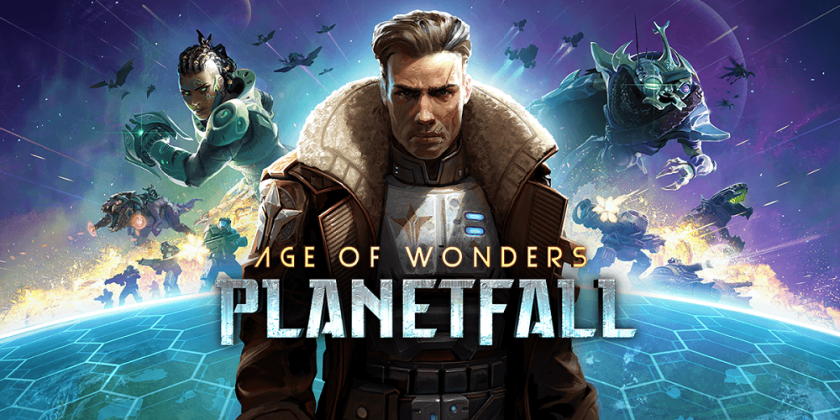 As soon as Triumph Studios announced their next Age of Wonders game, it rocketed near the top of my Most Anticipated list. Age of Wonders 3 (2014) was a fantastic turn-based strategy game that revitalized the series, and Age of Wonders: Planetfall did not disappoint. The sci-fi strategy game keeps the solid 4x strategy while streamlining colonization with sectors and expanding the tactical depth of combat, along with a meaty campaign mode. Also, the factions include undead cyborgs and amazons riding laser-mounted alien dinosaurs – hell yes. 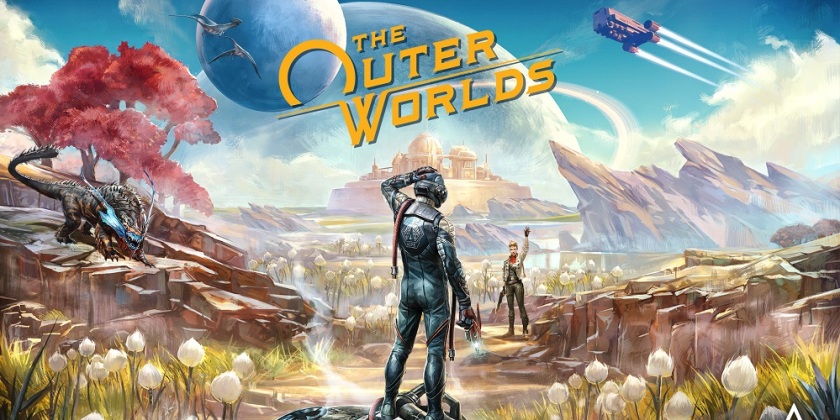 When Fallout: New Vegas released in 2010, we knew Obsidian Entertainment was capable of crafting an excellent Fallout RPG off of Bethesda’s first-person open-world style. The Outer Worlds is proof that they can make their own first-person RPG, and it’s a damn good one.

The Outer Worlds brilliantly combines the best parts of Mass Effect (memorable party members; zipping around to different planets) and Fallout (snarky world poking fun at capitalism; rewarding exploration and slow-mo combat) to create a game that’s the opposite of innovative, but a very enjoyable AAA experience.  All of this works because it has legitimately great writing, with party members I actually cared about, and a shockingly down to earth story that doesn’t rely on big bad killer robots or genocidal aliens. Best of all, it distills all the good parts of those big RPGs down to a very well-paced 20-30 hour game. 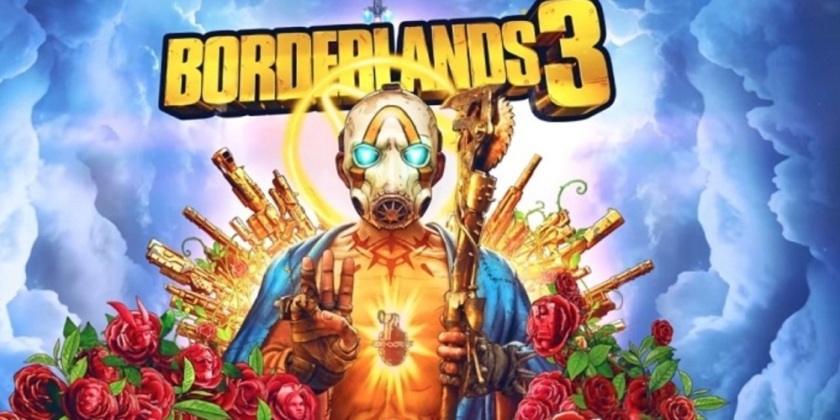 Borderlands 3 is an amazing game and a worthy sequel to one of the best games of the previous generation. The writing isn’t quite up to the high standards set by Borderlands 2 (and its equally excellent DLC), but the new characters are solid, and the gameplay offers tons of welcome improvements, such as multiple (and customizable) abilities per character, separate loot tables for parties, and alt firing modes on top of the ridiculous amount of guns. The threequel smartly doesn’t try to fix what sure as hell wasn’t broken: fantastic co-op looter-shooter gameplay.

The Borderlands series means a lot to my wife and me, and we actually played through all of Borderlands 2 again before Borderlands 3 came out. I’ve played BL3 for 50 hours so far, and 40 of those hours have been with split-screen co-op, and have enjoyed every minute of it. Borderlands 3 is my #1 game of the year.

Biggest Surprise: Remnant: From the Ashes 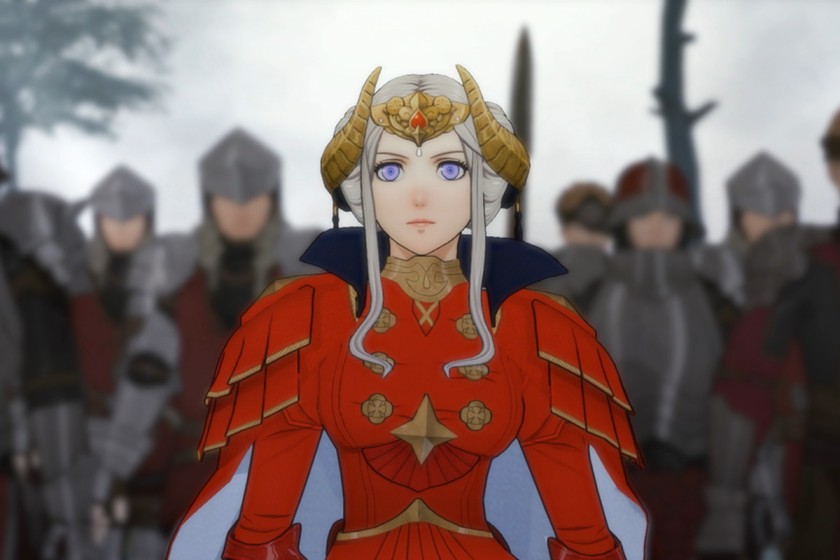 Best Game Nobody Else Played: Druidstone: The Secret of the Menhir Forest

Most Innovative: Slay the Spire

Too Long; Didn’t Finish: Bloodstained: Ritual of the Night

Have a wonderful holiday and I’ll see you next year with my most anticipated games list of 2019!

Pokémon Sword and Shield represent the first new main series Pokémon games on a home console, and the results are mixed.

Instead of playing it safe, the series boldly introduces many new mechanics and features, such as the free roaming Wild Area, co-op Raid Battles, and Dynamax. But these new features come with some annoying growing pains. We’ve listed below everything we love – and hate, about Pokémon Sword and Shield. 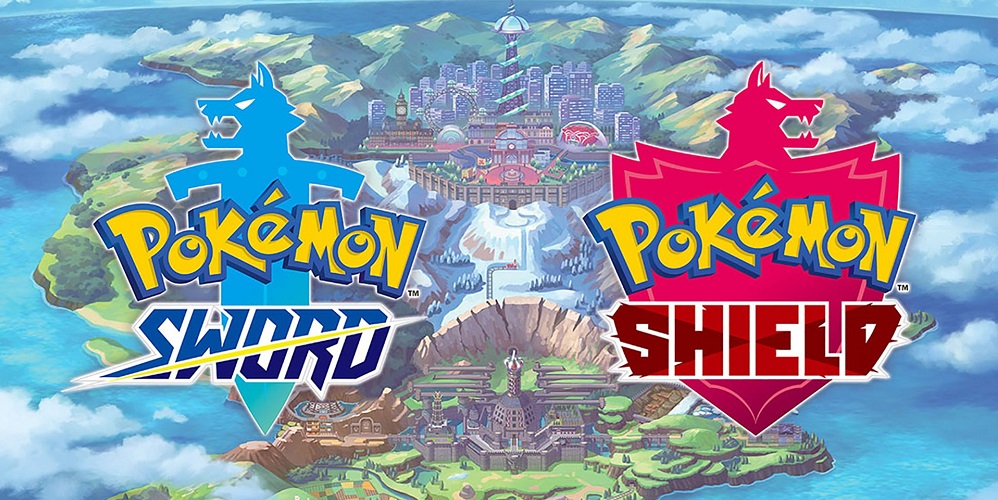 Pokémon Sword and Pokémon Shield are two of the most anticipated games coming later this year. The eighth generation will make the pivotal leap from a handheld-focused series onto the Nintendo Switch. They also represent the first all-new main Pokémon games since 2016’s Pokémon Sun and Moon.

Details have been scarce, with Nintendo and The Pokémon Company teasing us with trailers and introducing the three new starter Pokémon. A Sword and Shield-focused Pokémon Direct is scheduled to stream next week on June 5. The Direct should provide further details, and hopefully a release date.

Until then we have mostly speculation and a wishlist of features for Pokémon Sword and Shield.