I plunge into the Warrens and discover effective synergies between certain classes in Weeks 5 and 6.

While I’m still hoping to reach my next Patreon Goal to add a possible second live Let’s Play stream per week, I’ll be peppering my live Let’s Plays with some offline gameplay. To help remember what happened, and to regale you of any drama, I’ll be writing these Field Reports between Episodes.

I haven’t lost any heroes, but I’m also being very cautious and proactive in regards to stress and disease. I’d expanded my roster to 12, but nearly half of them were in treatment, including most of my veterans.

Week 5 brought my first special event – an extra six recruitable heroes, in addition to the three I’m offered every week! Unfortunately I’d already hit my cap, so I went through and dismissed some that I was less than enthused with, like the Antiquarian. I hired an Arbalest named Vane, and a second plague doctor named Chatwood.

I’m still embarking on Short missions and working my way up to the first boss of each region. I’m mostly picking missions based on the rewards; often the rewards are class-specific for something I haven’t even seen yet, like Hound Master.

I embarked on a Short Warrens mission with the goal of exploring 90% of the rooms. I used the following squad:

I enjoyed using a Leper as my frontline tank for the last run, but he got so fucked up with stress and disease that I dismissed him. Thankfully I have another one!

I really enjoyed the team comp here, as multiple heroes could mark, stun, and heal, and Engerrand received the Man Hunter quirk from a curio that lets him do more damage against the mutated beasts of the Warrens. 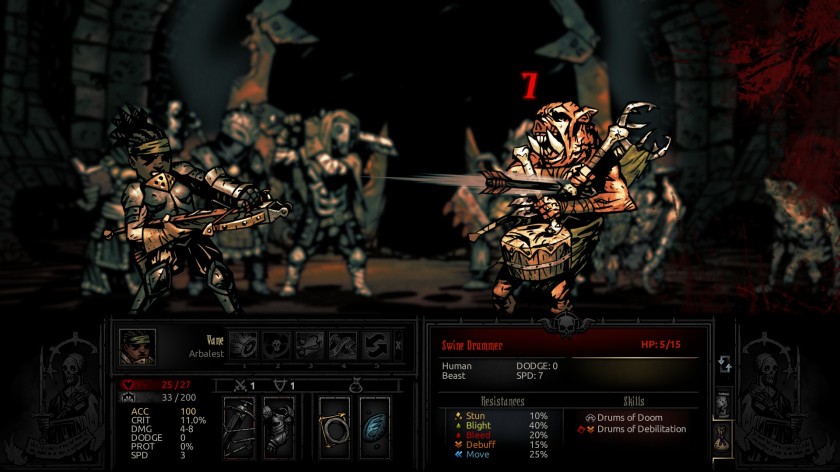 With my full healer Boneth keeping everyone topped up it was a fairly easy mission (Vane and Lynom also have healing abilities as well), but I realized the Warrens deals a lot of Stress damage, and has a very annoyingly high chance to infect my heroes with disease.

Learning which foes appear in what zones is definitely key to putting together a successful team.

Both Vane and Boneth were heavily stressed to around 50, and Vane got Syphilis! Ugh. I’ll be without my awesome Arbalest for awhile as I have to treat her disease first, then her stress level.

Most of my roster is now back in action. I really wanted to use Fitzherbert the Grave Robber with her awesome Very Rare relic, but she had been in a similar situation as Vane, and now had to go to the bar to relieve stress after she was treated for disease last week. 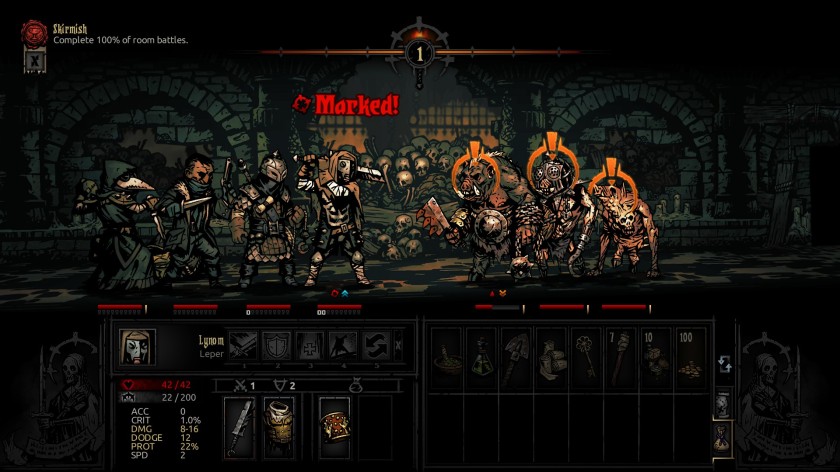 With a better understanding of the Warrens, I decided to go on another Short Run. Mission Goal: Defeat 100% of Room Battles.

I broke my rule here by not slotting in any newbies, but I was excited to have an experienced squad for once (experienced for me at least). Dismas was technically diseased, but his disease only affected Camping Skills, and Short missions don’t use camping at all (and I’ve yet to try a longer one).

This team kicked all kinds of ass. Engerrand proved incredibly useful because he did bonus damage to Humans, Marked and Stunned, and he could also Stun and Mark foes with different abilities.

Dismas is the bleeding king with a strong AOE attack, and I used Corbon’s Stunning grenade more than his actual acid grenade with good results. Lynom was just there to tank and soak it all up, and he did a fine job.

The result was one of my best runs yet, with no one above 30% stress. And still no deaths! The only bummer was Dismas getting a second disease, a nasty one that I’ll need to treat.

The good news: I officially unlocked my first boss – The Swine Prince! It’s a Medium mission. I’ll probably want to try another Medium mission first just to see how they operate. I’m also going to try and save boss runs for the live streams if possible.

Look for more Field Reports throughout the week. Watch my Let’s Play live streams every Monday.

One thought on “Let’s Play – Darkest Dungeon Field Report 2a”