Saga Volume Four focuses a bit too much on predictable family drama, but remains one of the best stories in modern comics. 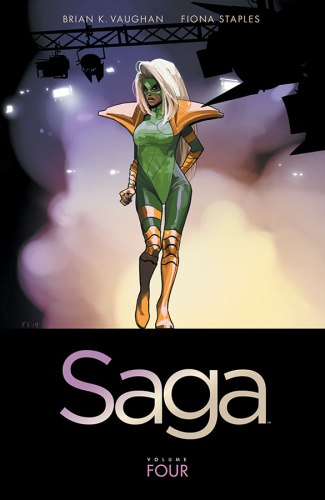 The following phrases were exclaimed during my time with Saga‘s fourth volume:

I devoured Saga Volume Four in a single day. The incredible (yet incredibly relatable) adventures and drama of new parents Alana and Marko continue to be one of the most impressive stories in modern comics.

Vaughan effortlessly builds an intriguing cast of wacky guest-stars and returning favorites, and isn’t afraid to kill or main them (or have sexy time) in a maturity level that would make Game of Thrones blush. Fiona Staples continues to be one of my favorite artists working in comics. While Saga Volume Four may be the weakest volume I’ve read thanks to some predictable family drama, that’s mostly due to how amazing the first three volumes were. END_OF_DOCUMENT_TOKEN_TO_BE_REPLACED