“The Five Nightmares” introduces the son of Obediah Stane out for revenge against Tony Stark. 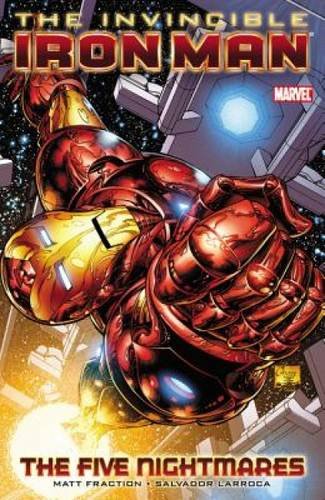 The first Iron Man film released in 2008, setting the stage for the incredible Marvel Cinematic Universe that’s seemingly taken over most of Hollywood, and cemented superhero films as the defacto Blockbuster genre.

To coincide with the film’s release, Marvel did the smart thing and started a brand new Iron Man comic series – Invincible Iron Man by Matt Fraction and Salvador Larroca. The timing was a bit weird – it actually started while Iron Man’s previous self-titled series was still wrapping up before ending with a brief War Machine Secret Invasion tie-in (which was quite enjoyable).

The previous Iron Man series was a bit hit or miss but ultimately came away glad I read it. I was never a big fan of Iron Man growing up (or the Avengers really). I’d go as far to see that Iron Man was teetering on C or D-list fame until 2006’s Civil War catapulted him to the spotlight. Suddenly Stark was Director of SHIELD and one of the most important people in the Marvel Universe, a theme that would continue to this day.

Although Invincible Iron Man’s first volume, “The Five Nightmares” launched during Marvel’s mega-event of 2008 Secret Invasion, the comic wisely avoids any direct connection. It’s quickly assumed that the story takes place before Secret Invasion, as the event directly involves Stark and his status as Director of SHIELD. “The Five Nightmares” centers on the son of Obediah Stane – played by Jeff Bridges in the first Iron Man film, and acts as a nice jumping-on point to Iron Man comics from newcomers coming from the film as well as fans of Tony Stark. 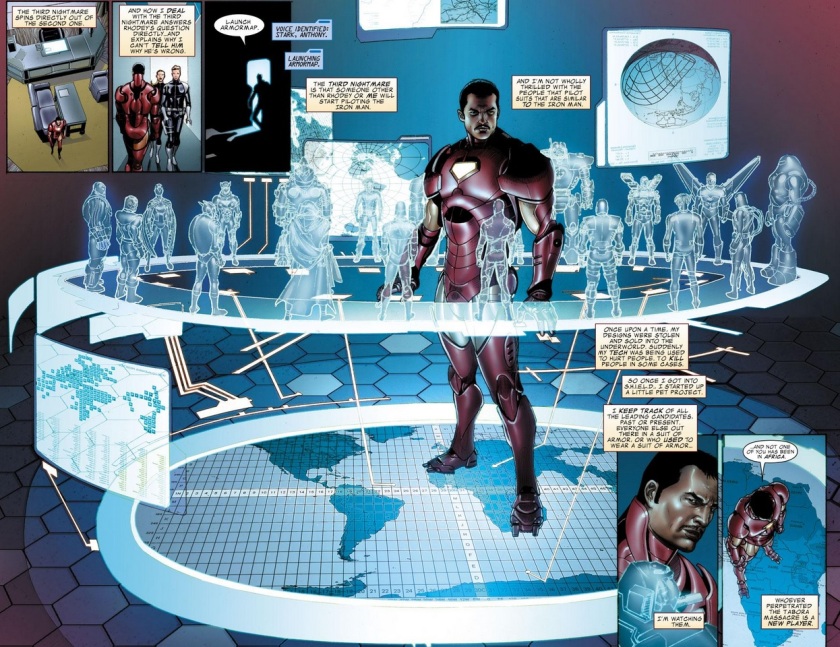 Matt Fraction (who’s also writing Uncanny X-Men at the time) paints a very movie-friendly storyline. The title refers to Tony Stark’s biggest fears and worries, from losing the rights to the Iron Man suit to someone else building the technology. One fear he might not have counted on was a vengeful son of a former villain, who’s ambition drives him to improve himself biologically the way Stark has done with technology.

Zeke Stane has a youthful energy and rebellious disregard for authority and structure that makes him a fun villain to watch. His actions are pure terrorism, however, implanting people with bombs and creating dozens of deadly suicide bombers. One bomb nearly kills Tony and Pepper Potts, and he’s forced to give her the same Arc reactor that he once had to keep her alive. 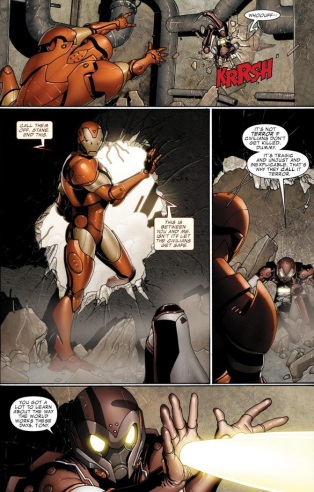 Like too many comic stories the build-up is better than the pay-off. Stark is able to track Stane’s location with some implanted black market goods, and defends against a multi-pronged attack using a veritable army of drone-powered iron man suits, much like the finale of Iron Man 3. In fact, the whole exploding people thing is also in Iron Man 3! Stane Jr. and Stark have their one-on-one match where they trade pithy remarks and blast each other. Stark comes out on top, and all is well. Well, except for all the people that Stane did successfully blow up.

“The Five Nightmares” is a decent story but unfortunately hamstrung by Salvador Larroca’s glossy, plastic-y art style, of which I’m very much not a fan. I also hated that although Larroca does the ‘show Tony’s head in the suit’ shots that the film did so well, he draws it as a weird, disembodied floating face, which looks incredibly stupid. A decent story can be raised up by an art style you really dig, but the reverse is also true. I admit I was bummed to see that Larroca drew all 62 issues of this successful run that leads all the way into 2012.

It’s a shame as the story itself really isn’t that bad. I enjoyed that Fraction makes a point of setting up Tony’s status as Director of SHIELD, a major businessman, a superhero, a playboy, and a man filled with regrets who still tries to do the right thing. We’re told of Stark’s origin without having to literally relive it, and it does seem like a good starting point for folks interested in Iron Man by telling its own complete story and not miring itself in Marvel continuity. I just wish it had a slightly better art style.