In 2008 Marvel had not yet realized the beginning of a whole new era of superhero film making was just beginning. They did put all their eggs into the Iron Man basket by starting up their own film studio instead of selling more of their rights off to others (which should be pointed out, is a big reason they survived the comic collapse of the 90s).

Thus it was obvious that a brand new Iron Man comic would launch in 2008 to draw in new fans from the movie, as well as furthering the expanded role that Tony Stark has enjoyed in the Marvel Universe for the last few years.

The first arc, “The Five Nightmares,” was a fun, self-contained story. Unfortunately due to the heavily event-driven modern era (which still kind of continues to this day), newcomers might be super confused in this next massive story arc. Stark resigns as Director of SHIELD, while Norman Osborn has become the most powerful man in the world. Welcome to Dark Reign!

While Dark Reign encompasses most Marvel comics throughout 2009, it most heavily affects the Avengers, and specifically Tony Stark. The follow-up from the skrull Secret Invasion put most of the blame on Tony Stark and his technologies (politicians love to play the blame game), and Osborn’s new role as leader, liberator, and war hero was quick to condemn him.

The 12 issue “World’s Most Wanted” is a slow burn, with the majority divided up between multiple plot threads between Stark, Pepper Potts, and Maria Hill. Stark correctly guesses that Osborn is after the Superhuman Registration database. Since Stark ‘won’ the Civil War, heroes have been required to register with the government. Having this personal information leak out to someone like Osborn would be pretty bad. Since infusing himself with Extremis, Stark downloaded the entire database into this brain, and now he needs to erase it. His brain. Yep.

To go through with this overly complicated self-lobotomy, he needs to visit his various secret labs around the world to utilize the proper equipment and power. He carefully explains that putting a bullet in his head might not tear apart his brain in the right ways. Fine. I did enjoy that when he goes to Russia, Crimson Dynamo asks him why he can’t just jump in a volcano, and Stark just looks at him. Silly plots are fine and writer Matt Fraction seems to acknowledge it several times. 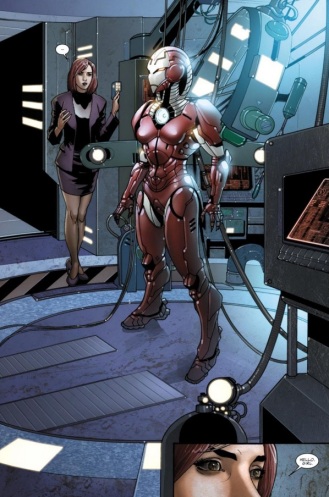 Meanwhile, Potts and Hill both have major roles in the comic, as does the later addition of Black Widow. Since she had to given her own chest arc reactor in the previous story, Pepper finds her own suit built by Stark. True to her character the suit doesn’t have any offensive capabilities or weapons, but it can put out a ton of power, and is more than handy at rescuing people and handling situations. She also gets her own Jarvis! Her path quickly intertwines with Stark’s in Russia before she’s whisked back to Osborn and HAMMER in a fun act of subterfuge.

Maria Hill is a woman on the outs. She’s fired from SHIELD and meets with Stark to hear about his plans. From there she goes on a fairly crazy journey involving an abandoned facility in Texas run by a zombifying villain called the Controller. Eventually she escapes, meets up with Black Widow, and takes on Osborn.

At one point all three women are fighting together in the helicarrier and I couldn’t help but be incredibly impressed by not only the female representation in this comic (an Iron Man comic of all things) but how very well written all their interactions were. The stressed, haunted Hill trying to convince the paranoid Widow was especially fantastic. It’s weird to think that the best parts of the comic didn’t involve Stark at all.

Tony Stark still has his own international odyssey to tackle. The side effect to his ongoing brain-deletion is that he’s losing cognitive faculties, including the ability to operate his own suits. He’s forced to downgrade, eventually returning to the original cave in Afghanistan where he built his first tin can armor.

It all culminates in an epic back and forth battle as our heroines fight aboard the helicarrier while Osobrn dons his Iron Patriot suit and takes on a very weakened Iron Man. Stark is saved only by Jarvis alerting the media to get cameras on the fight, and Osborn is forced to not murder a surrendering Stark in cold blood in front of everyone. The curse of being a villain in the public eye. Stark’s lobotomy completes however, and the comic ends with the former playboy comatose in a hospital bed (carefully watched by Osborn) as our other heroes gather for the next phase. 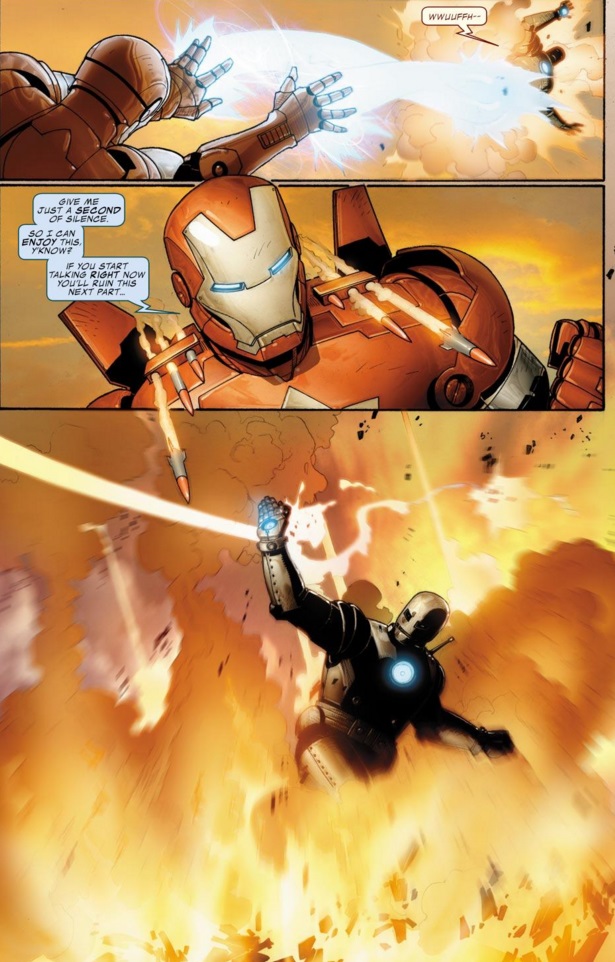 I’ve been critical of Savlador Larroca’s art in the past. Everyone has an odd, plastic look to them and the poses and angles never feel particularly dynamic. I didn’t mind it as much in his comic as in the past, and I thought the writing and plot were strong enough to make up for my differing taste in art style. The few action sequences, particularly the final battle between Iron Patriot and retro-Iron Man, was full of explosive goodness.

Matt Fraction weaves a great story that strongly reminded me of Ed Brubaker’s Captain America – very grounded, heavy in political overtones, and a small but well-written cast of characters. I’d go as far to say that this was my favorite Iron Man story I’d read – and I read most of the four year run of the previous 2004′ – ’08 comic. Turns out the best thing to do is strip Stark of his all-powerful suit, slowly degrade his brain functions, and add some kickass leading ladies to the mix.