A new adventure kicks off as our runners are tasked with working security at a rock concert.

A new adventure begins! One of the aspects I like to incorporate into my game writing and structure are my players’ back stories. In our previous adventure I teased Mauta’s back story, eventually causing her to reveal her darker past to her fellow runners in a fun, tense moment, and giving her a crisis of conscious with a choice at the end.

For our new adventure I used an NPC from our troll shaman Ursev – his estranged brother Benton. I got with the player and had him detail a bunch of information so I could role-play the character effectively. The idea was to have the brother track down the runners after their recent exploits and offer them their next job – joining his private security team in protecting a famous singer during her show at a concert hall.

There was a lot of role-playing and dialogue during these set-up prologue events. I feel like it went over smoother than previous set-ups as it was more back and forth rather than having me just dump a bunch of information at the players’ feet. The players asked questions and I answered, and it all felt much more natural and interactive.

The players were also given time to shop around for any new equipment they wanted, as well as explain any character advancement thanks to the rather substantial karma and nuyen rewards they received at the end of the previous adventure.

As a GM I’m not too terribly concerned with role-playing and nit-picking the downtime stuff. I use some slightly modified house rules for buying equipment that seems to work for us, and everyone pretty much relies on the team’s Face/Adept for his superior Negotiation skills.

The bulk of this first session was actually just the prologue – buying equipment, gathering information, and talking with the quest-giver. In a twist from previous adventures, I offered the runners a chance to visit the venue they’d be guarding.

Benton escorted them through the building which gave me a chance to give detailed descriptions without the added chaos of the upcoming event. It also gave the players a chance to explore the building and plan on how they wanted to handle their protective duties.

For once there was actually no combat in the whole session. The players had a ton of prep time to get the proper equipment, learn about the mission, and even scout the venue they would be pulling guard duty at. 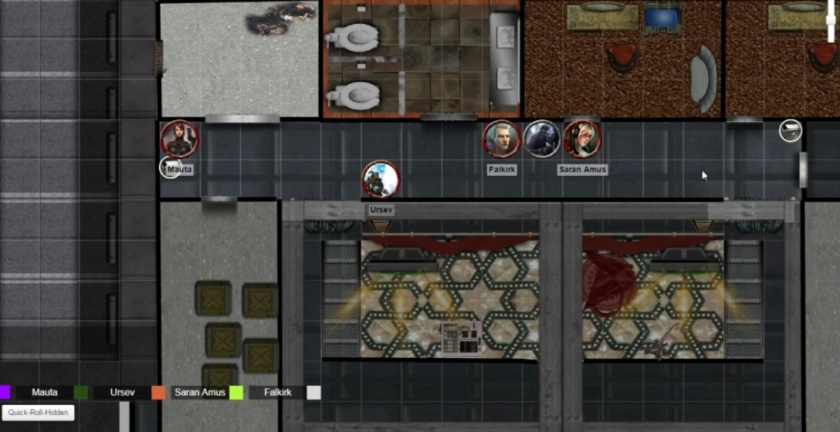 I’m excited about this mission as it was the initial story idea I had when I first got into Shadowrun role-playing. I’m hoping I didn’t overextend myself too much with events surrounding a full-fledged rock concert, and it should provide a ton of opportunities for multiple exciting events and incidents.