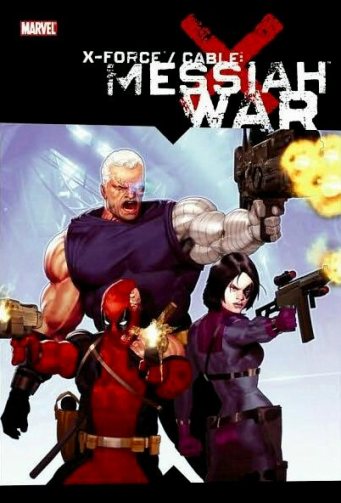 “My Name is Lucas Bishop. I am a child of the atom, raised in a future that no longer exists. I was born for this…”

I was a big fan of Messsiah Complex – the big X-Men event title of 2008 that involved no less than four X-Men series. Centered around the first mutant birth since House of M, Messiah Complex launched several new series, including a new, hyper-violent X-Force and the time-traveling, on-the-run survival story in Cable.

It’s fitting that these two series come together in their own crossover. Messiah War acts as a smaller, more focused sequel, but it ultimately comes across as a pointless Saturday Morning Cartoon in which nothing really changes at the end.

The event is typical of other X-Men crossover events of the time, in which the stories go back and forth between series, necessitating reading multiple series to get the whole story.

Unfortunately the art styles of Cable and X-Force are so incredibly unique and different that it’s very jarring going from one to the other. Ariel Olivetti’s style in Cable resembles lightly painted water colors, while Clayton Crain’s X-Force is so dark it’s often difficult to tell what’s going on in any given scene.

The story kicks off with a Messiah War One Shot issue that does a good job explaining the heavy continuity involved with understanding what the hell is going on. Make no mistake, you have no business reading Messiah War if you haven’t at least read Messiah Complex. Hopefully you’ve also read Cable and X-Force, as well.

We’re introduced to our big event villain as Bishop recruits Stryfe, Cable’s evil clone. Stryfe is the epitome of the ridiculous 90s villain, and he totally dons his silly spiky metal outfit to hold dominion over his corner of the future. Thanks to Bishop’s time traveling, they can easily take out Apocalypse and simply wait for Cable and Hope to show up, trapping them there.

Meanwhile Cyclops and Beast have finally been able to track Bishop, and Cyclops sends the team 1000 years into the future to help Cable, even when the team is in the middle of their own crisis. Thus, our crossover begins.

The whole seven issue adventure takes place over maybe half a day, and mostly involves two action scenes, both with our heroes fighting Stryfe. It reminded me of all those comics where the X-Men fought Magneto. In other words, been there, done that.

A super old, half-zombified Deadpool shows up and is definitely one of the highlights of the story. The various writers do a great job portraying him as even more insane than usual, and he provide some much needed levity in the dark and violent personalities of our cast.

Eventually Stryfe captures Warpath and Hope and the rest of the team splits up to rescue them. Domino, X-23, and Vanisher are given basically nothing to do as they wander around and eventually shut down the device that’s preventing them from teleporting. It turns out to be a person, an old classmate of Laura’s, but who really cares – it’s a random dystopian future.

Wolverine, Elixir, and Cable make it to Stryfe and they and Bishop have an extended, drag out fight over what must’ve been several months when these comics were first coming out. It’s a decently fun battle as everyone scrambles to save Hope, who seemingly gets rescued at the last moment at least half a dozen times to the point of absurdity.

Oh, and meanwhile Archangel flies off at the beginning, finds a dying Apocalypse, and convinces him to come help kick Stryfe’s ass. Pocky Lips shows up at the end and finishes Stryfe off, then Archangel rolls a successful Persuasion check to get him to return Hope, and everyone can be on their way.

Bishop teleports away and vows to keep doing what he’s doing. Apocalypse takes Stryfe away so everything resets itself. X-Force returns to their time while Cable and Hope continue time traveling into the future. Everything goes back to normal and nothing that happened mattered! Very frustrating from what I expected to be a major moment in the ongoing narrative. Instead it was just a random coming together to battle an old, lame foe.

Your crossover is not good when I want both parties to just go back to their own stories (especially Cable and Hope’s time displaced, father-daughter survival).

Also included in the event is a special three part mini-series that finally explains Bishop’s backstory. The Times and Life of Lucas Bishop is an intriguing look at our one-time future warrior and X-Man’s future-past, from his birth in a mutant internment camp to recruitment to a strike force. I think we actually knew most of this information already, but it was still a fun look.

However, I found the art by Larry Stroman horrendously awful. It’s a weird style where nobody looks quite human (looking more like gorilla aliens or something) and every face is incredibly exaggerated. The story was decent enough to keep me reading, but had the art been better it probably would have been my favorite part of the whole event. Instead I was glad when it was over.

Despite enjoying both Cable and X-Force, their crossover event Messiah War ended up being supremely disappointing. The ongoing plot of Bishop hunting Cable and Hope didn’t get resolved nor even really change. Stryfe is dumb and too much like every other super powerful X-Men villain, and it all boils down to a handful of fight scenes. The few highlights are Archangel’s interactions with Apocalypse, and Deadpool being Deadpool. I’ll continue to read both series but I found Messiah War‘s potential as a time-traveling showdown a very wasted opportunity.