The Thanos Imperative is a culmination of events spinning out of War of Kings and Guardians of the Galaxy.

The creative writing team of Abnett and Lanning enjoyed a string of major successes in the 2000s. They reshaped the entire Marvel Cosmic setting through awesome events like Annihilation, Annihilation Conquest, and War of Kings. They created the dysfunctional and fun Guardians of the Galaxy. They made Nova a central hero in all things cosmic.

And they made it all come together in The Thanos Imperative.

Like previous cosmic events and series, to understand The Thanos Imperative requires a lot of set up. The plot spins right out of War of Kings, which heavily involved every major cosmic faction: the Kree lead by the Inhumans, the Shi’ar, Nova, Blastaar, the Guardians of the Galaxy – hell even Silver Surfer and Galactus have to show up.

The bomb that was meant to end the war between the Kree and the Shi’ar ripped open a fault to another universe. Dubbed the “cancerverse,” it’s a place where death has, uh, died, and life has taken over without limits. It’s ruled by giant Cthulhu-esque tentacle elder god things, as well as dark cult version of all our recognizable heroes.

It all comes off a little dorky, especially as their leader is the dark version of Captain Mar-vell, a cosmic hero that has been long dead in our Marvel universe. They shout “F’taghn” a lot and wring their hands over killing death and establishing a foothold in our universe. It’s yet another worlds-ending catastrophe that brings all our heroes together.

What makes The Thanos Imperative work well are the Guardians of the Galaxy. The latter issues of their comic petered out a bit as they dealt with the cancerverse fault. Here they’re given a specific task – escort the newly resurrected Thanos into the fault. Thanos is the avatar of death, and his very presence upsets the balance in the cancerverse.

By giving them a clear goal the Guardians have a fun, dramatic journey as they fight over what to do with Thanos and battle the evil Avengers of the cancerverse (dubbed “Revengers,” oye). Having previously killed Thanos with his bare hands during Annihilation, Drax is especially not happy with the escort mission, and the two quickly come to blows.

On the other side is Nova and the major cosmic factions trying to stave off a full blown invasion of elder god things. There’s a nice back and forth between the Guardians’ mission and Nova’s defense force that keeps the action brimming along.

The Thanos Imperative has the distinct difference of only containing the six issues of its mini-series, plus a prologue and epilogue issue. Previous cosmic events included several spin-off series and tie-ins but here the action is focused on this one major plot line. It also means The Thanos Imperative is not quite as deep as previous events.

The most interesting thing to come out of the story is Thanos himself. For the first time in a very long time we’re treated to Thanos’ inner workings – his personality, hopes, and beliefs. I found it fascinating to read such a storied villain broken down into a despondent shell who simply yearns for death (both figuratively and literally – he’s still in love with the personification of Death in our world).

Nova creates his own Guardians-type team of cosmic badasses: Beta Ray Bill, Gladiator, Silver Surfer, Ronan the Accuser, and Quasar. It’s all they can do to hold their ground while the Star-lord led Guardians team does the important work. I liked the little twists involving the Vision and Scarlet Witch versions of the cancerverse. Turns out they’re none too happy about the “Many-angled ones” and help our heroes reach their destination. 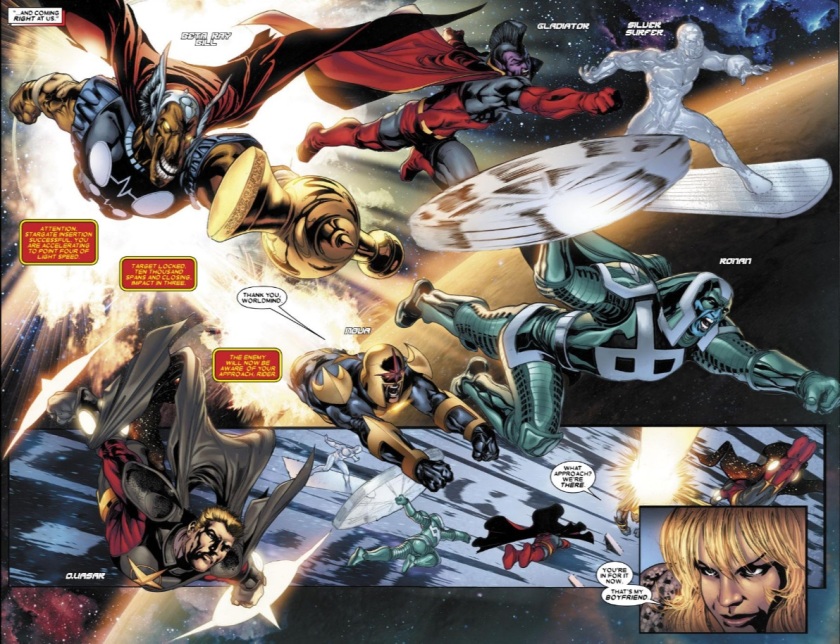 In the end Thanos lets evil Captain Mar-Vell kill him. Or at least try to – which summons Lady Death herself to restore the balance. The cancerverse is collapsing, but Thanos begins freaking out when Death ignores his pleas. The rest of the team gets out, but Nova and Star-lord get to have their little Butch Cassiday and the Sundance Kid moment, and knowingly sacrifice themselves in the end to keep Thanos at bay.

I had a feeling one of them would go down, but surprised both of them did. I figured it would be Nova since his story was kind of finished as the Nova Corp is now being re-established. But apparently we’re breaking up the Guardians team at the end as well. Sad.

At the end Cosmo revealed he was instructed by Star-lord to create a new Guardians of the Galaxy on the ashes of the war. It’s the team Nova had formed, and it’s a total sausage-fest. I can’t say I’m terribly excited about these figures, as many of them are far too powerful (like Silver Surfer and Gladiator).

The Cosmic stuff has had a problem with escalation, where every major event has had to be more insane and universe-ending than the last. The War of Kings at least had a ton of cool political factions and characters.

The Thanos Imperative boils down to “bad stuff is coming through a portal.” Abnett and Lanning do a good job making it fun and exciting, and Thanos is a neat character. The Guardians have a fitting final adventure and the sacrifices at the end felt meaningful (even though Star-lord at least comes back from it at some point).

But overall The Thanos Imperative is the weakest cosmic event I’ve read. It’s short and fairly self-contained, though you’ll still need to read through Guardians and possibly the previous events to have any idea of who these characters are. Thanos is a fun character and the art is decent enough, but the whole “cancerverse” thing is kind of silly. Hopefully that wasn’t the last run of the classic Guardians of the Galaxy team – I need more Rocket Racoon and Cosmo in my life!