The cosmic side of the Marvel Universe – which is to say, everything other than Earth, had been carefully designed by the writing team of Dan Abnett and Andy Lanning for several years before War of Kings hit in the Summer of 2009.

Beginning with the catastrophic Annihilation event in 2006, the wider universe had been in a state of flux and terror. Combined with intriguing story seeds spinning out of X-Men: Deadly Genesis and Secret Invasion: Inhumans, War of Kings represents the sweeping payoff for several different factions, series, and events. It’s a hell of a lot of fun, with the same great artwork by Paul Pelletier from previous cosmic events. But fully understanding War of Kings requires several years worth of Marvel comics stories.

The six-issue event starts with the incredibly pissed off Inhuman royal family. During the Secret Invasion event, Black Bolt was one of the biggest heroes that was captured and tortured by the skrulls, while a doppelganger was posing as him, including sharing his wife Medusa’s bed.

Naturally he’s super peeved, and decides that their self-imposed exile on Earth’s moon has gone on long enough. The entire city of Attilian becomes a giant starship as they rocket off, shooting down fleeing skrull ships. They arrive at Hala, homeworld of the Kree people, and the progenitors of the Inhumans. The Inumans decide to fulfill their destiny and rule the Kree people, promising to uplift them as the Kree once did to them.

Give the horrific nature of recent events including the Annihilation Wave and Ultron and the Phalanx, Ronan the Accuser, current leader of the Kree, welcomes the Inhumans with open arms. The two parties agree to marry he and Crystal, Medusa’s sister and ex-wife of Quicksilver.

Meanwhile the other major Marvel cosmic race, the Shi’ar, are still being ruled by Emperor Vulcan. Gabriel Summers is the long lost third Summers brother (that is one crazy family tree) that was introduced in a shocking revelation in X-Men: Deadly Genesis. His story then continued in Uncanny X-Men: Rise and Fall of the Shi’ar Empire, X-Men: Emperor Vulcan, and finally X-Men: Kingbreaker, which acts as a lead-in to War of Kings. Whew.

Basically Vulcan is a super-powerful, omega-level mutant that sought revenge on the Shi’ar that killed his mother and enslaved him. He quickly did so, then decided to rule the Shi’ar with an iron fist, deposing Lilandra and marrying her evil sister Deathbird. At the beginning of War of Kings he expands his conquering empire and even murders an envoy sent by a galactic committee, which horrifies even Deathbird.

Vulcan is a hilariously one-track minded evil villain. He’s a petulant megalomaniac with zero redeeming qualities, and exists solely to kill people and yell a lot, usually both at the same time. Not exactly a compelling villain.

Our primary first-person narrative viewpoints do not come from the factions’ respective leaders, but from those just outside. From the Inhumans we get Crystal, who wants nothing more than to end hostilities as quickly as possible. Her ongoing thoughts on politics, ruling the Kree, and loving Ronan bring a much needed pathos to the big-scale intergalactic war, and she plays a large role in the exciting finale.

Meanwhile we get the Shi’ar POV from Gladiator, the purple, pointy-eared god-like Superman figure that’s supremely loyal to the throne. His loyalty is tested on multiple occasions and becomes an important factor throughout the series. Credit to Abnett and Lanning for making an otherwise staunch and boring character compelling and layered. 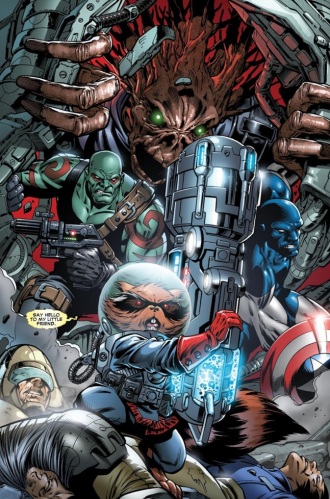 The story provides a ton of fun moments and battles, featuring a new Shi’ar Imperial Guard of dangerous criminals, an Inhuman Elite strike force, and the Starjammers, now lead by Havok and Polaris of the X-Men.

By this time in the cosmic setting we have both Nova and Guardians of the Galaxy as ongoing series, and both heavily tie-in to these events.

Nova’s War of Kings story is extremely tangential, and really just uses the Kree-Shi’ar war as a backdrop to its own story. Continuing from Nova’s Earthbound woes with the Worldmind, it features some lackluster artwork and a plodding story that I’d already lost interest with in his last volume. Basically Worldmind tries to take over Ego, a sentient planet with a goatee, and things go predictably bad.

Richard Rider ends up fighting a bunch of newly deputized Nova Corps before saving the day, then going off on a random adventure to battle some folks form War of Kings. It’s super unnecessary and not nearly as awesome or important as his storyline during Annihilation: Conquest.

Guardians of the Galaxy, on the other hand, has an awesome intertwined storyline that has them splitting up and meeting with both factions, while also fighting and teaming up with the Starjammers. The first five or so issues of the confusingly named War of Kings Book 2 (Book 1 is a lead-in at best) are a fantastic action-packed adventure as the Guardians try to stop the war and fail miserably. They also feature quite prominently in the main War of Kings issues.

After that things quickly go off the rails once the Fault is opened up. Part of the team goes through an incredibly bizarre dimensional warp, meeting an odd future-Guardians squad. It’s pretty damn weird. I also wasn’t a fan of the hugely expanded roster, as very few characters receive any more depth throughout the series.

Despite having several years worth of backstory and build-up, Vulcan is an incredibly uninteresting villain, and it hurts the overall adventure. I felt like too much time was spent on the Shi’ar and not enough on the far more interesting dynamic between the bickering Inhumans and Kree that they’ve essentially passively conquered. Some interesting colonialism themes are danced around, and I hope to read more of the Inhumans’ outer space adventures. The Shi’ar though, I’m willing to leave enough alone.

The Starjammers and Guardians of the Galaxy are fun teams and have lots to do, from infiltrating starships to battling multiple factions at once. From a pure beat-down, pulpy perspective War of Kings excels quite well, and manages to both end the war while setting up an intriguing following event with The Fault in Realm of Kings. Its continuity-heavy story remains incredibly dense, but if you have been reading Marvel cosmic stories (and the relevant X-Men space stuff) from 2006-2009 it’s a hell of a payoff – as is finally witnessing Black Bolt unleash the full fury of his voice. 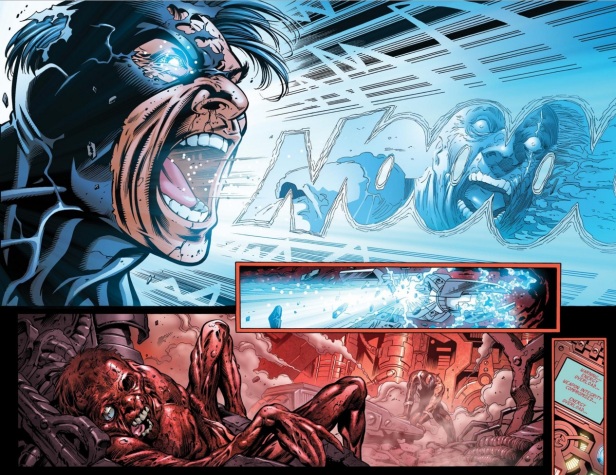