Nova battles Galactus and the Silver Surfer before defending Earth during the Secret Invasion.

Marvel’s cosmic stories hit a renaissance of high-stakes plots, epic galactic-spanning conquests, and larger-than-life heroes and villains in the mid 2000s. Nova, aka Richard Rider, aka the Human Rocket received a massive power upgrade as the sole survivor of the Nova Force after Annihilus’ army wiped out Xandar. His love/hate relationship with his Jarvis-like omnipresent collective AI known as the Worldmind became a fun and intriguing plot tool, and Nova was well utilized throughout the Annihilation and Annihilation: Conquest mega-events.

There’s only the briefest of breaks in the action before Secret Invasion pulls Nova to Earth, and from there the plot quickly paves the way for the next big cosmic clash of War of Kings. While I enjoyed the Silver Age heroics of our space-faring hero, I wish he had more time to plant some roots and thrive as a solo hero rather than being whisked away from one big crossover event to the other.

Volume Three, “Secret Invasion” includes two major story arcs, with only the latter being an actual Secret Invasion tie-in. The first three issues represent a strong start to Nova’s post-Annihilation story. His one-man space cop adventures lead him into direct confrontation with the planet-devouring Galactus and the Silver Surfer. Nova helps evacuate an entire planet, battle a parasitic, possession-happy monster, and fight Silver Surfer in attempt to by everyone just a bit more time. It’s a great showcase of both Nova’s impressive power level and his Captain America-esque morals and self-sacrificing ideals.

In the “Secret Invasion” tie-ins (#16-18) Nova meets up with former ally Super Skrull, who’s disillusionment with his people leads him to spill the beans on their invasion of Earth. Naturally Rider freaks out and heads home.

He visits his parents, then his brother who works at a top secret weapons and science facility – one that the skrulls desperately want to loot. Nova teams up with Darkhawk to defend the facility, and are ultimately rescued by the new Nova Corps – a team of various aliens and races that Worldmind imbued with the Nova Force (which also gives Rider his powers).

Nova is thankful (and suspicious) of the aid, and the group is a fun bunch including some recognizable races like Shi’ar and a floating head AI. But they barely get a chance to subdue a few lame threats (Dragonman, a Moleman monster, etc) before the plot strips Nova of his powers.

In “Nova Corps” (#19-22) the Worldmind becomes housed inside a giant sentient planet – with facial hair (stupid, stupid Fantastic Four villains). It also begins acting a little questionable, deputizing ordinary people left and right and giving them the Nova Force to quickly create a super-powered army. Nova fears that holding the Worldmind within him for so long has lead him to insanity – a cool mystery that’s unfortunately solved a bit too swiftly.

Instead Nova quickly figures out that the Woldmind has been subliminally controlling all of the Nova Corps, and Richard Rider finds himself powerless and on the outs of the whole organization – including his newly deputized younger brother. The volume actually ends on a cliffhanger as Richard does his best Darth Vader-esque “Noooooo!” at the end.

I enjoyed how each story segued logically into the next. It definitely felt like Worldmind’s reveal as either corrupted or misguided was a tense, natural build-up to Nova’s own suspicions, but it all happened incredibly quickly.

When the original Nova Corps team arrives at the end of issue #18, I thought we’d be treated to at least a few issues of an intergalactic Avengers-style team fighting threats. Instead Worldmind takes over a planet and Nova gets to have a boring sit-down with the Fantastic Four.

For his solo series Nova rarely gets a chance to actually act on his own. Silver Surfer plays a prominent role in the Galactus arc. Super Skrull provides tons of info leading up to Secret Invasion. Marvel desperately wants you to care about Iron Man-knock off Darkhawk for his upcoming role in War of Kings. And having the Fantastic Four show up and not even fight anything?

Crossovers and guest-stars can be a lot of fun when used well, but other than Silver Surfer none of them are particularly interesting. My favorites, the alien Nova Corps, are used for maybe an issue and a half before the plot moves into a much more grand scale – the curse of involving any cosmic superhero, apparently. 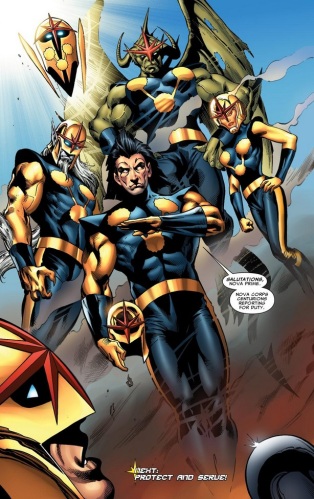 I haven’t even talked about the art, and I actually mean that as more of a compliment. It’s very base line, Silver Age heroics, which reflect the writing style, characters, and plotting. Everything is bright, the action is explosive, and characters fill the pages with various badass poses. It is not particularly memorable or unique but is very easy on the eyes and makes for an entertaining read.

I enjoy the Marvel cosmic stuff, and for a goody goody superhero Nova is admirable and relatable compared to his Earth-bound contemporaries. Abnett and Lanning thrive in constructing massive plots, and it looks like Worldmind’s ascension will tie into the War of Kings in some important ways. But meanwhile Nova is literally left in the dust. I wish a bit more time could be devoted to allowing Nova some cool space adventures – like Guardians of the Galaxy. Overall it’s a fun series but really only recommended if you’ve kept up with all the other Marvel cosmic happenings at the time.