Check out my previous Final Thoughts for Rogues’ Adventures. Keep up with my adventures in backlog gaming via the Facebook group.

After two big AAA stealth-action games I opted for something a bit tinier in scope. I’ve already had to shuffle my schedule around this season as my initial line-up of games proved far too optimistic in the amount of time I could devote to backlog gaming.

Transformers: Devastation caught my eye for obvious reasons. I love Transformers! The eye-popping art style and slavish devotion to the original 1980s cartoon characters was right up my alley. Unfortunately I fought with the gameplay the entire step of the way.

PlatinumGames has filled a niche market with hyper-intense action-brawlers, which is not exactly the kind of game I usually enjoy. Transformers: Devastation is a single-player brawler that feels like a modern-day Beat ‘Em Up – except with repetitive level designs, limited enemies, and frustrating difficulty spikes.

I was immediately drawn into the colorful world. The art style creates a rich, glossy texture for each character, who are painstakingly recreated to look exactly like their 1980’s, polygonal “G1” version. Often while playing I felt like I was walking around an HD episode of the original cartoon, and it set my nostalgic fan heart a-fluttering.

The story and writing synced up nicely with the art and superb voice acting, which brought back the talents of Peter Cullen, Frank Welker and more.

The story begins with New York City under attack by giant claw arms, sort of similar to the third Michael Bay Transformers film. The city is conveniently evacuated off-screen so we can skip right to the bot-punching and pew-pew lasers.

The plot centers around Megatron and the Decepticons discovering Cybertonian technology, and using it to “cyberform” Earth. It’s mostly an excuse to charge through linear chapters destroying everything in your way, though I did find the frequent cutscenes humorous and enjoyable.

The highest mark of Transformers: Devastation is that they completely nailed the tone, humor, and characters of the original series.

The bad news is I mostly hated playing the actual game. 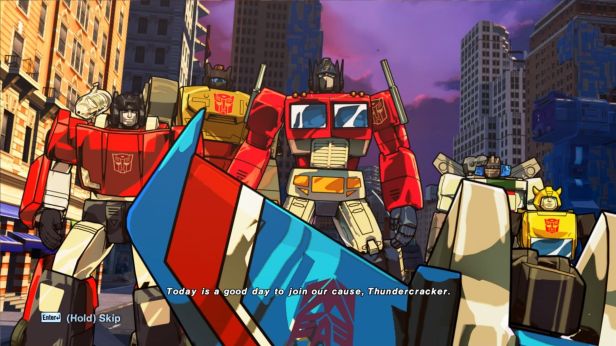 Now I’ll be the first to admit that I am no good at quick action games. I can enjoy the right ones, such as the Batman Arkham games. But even on the medium difficulty level I was often frustrated and annoyed with Devastation‘s combat.

Every battle forces you into melee combat, often outnumbered. Small sounds and arrow symbols alert you that an attack is incoming and you need to dodge. Multiply that by several foes and you spend most of the time rolling around every fight like a jackass. The characters did not at all feel like lumbering, powerful robots. Even the largest brute, Grimlock, had to nimbly roll around and throw punches or swing his sword.

Remember in the cartoon how every character charged each other for a brutal melee? Me neither! The ‘bots and ‘cons always shot at each other, only going in for melee combat under the direst of circumstances. Every other Transformers game knows this.

Transformers: Devastation is the opposite, with ranged attacks being an awkward afterthought with limited ammunition and low damage for anything other than the grenade launcher, which was tricky to aim.

Compounding the problem were laughably bad level designs. You’d think an empty NYC would prompt a fun, large area to explore. Nope! Instead the buildings act like giant walls as you funnel through linear tunnels of city streets from one battle to the next. 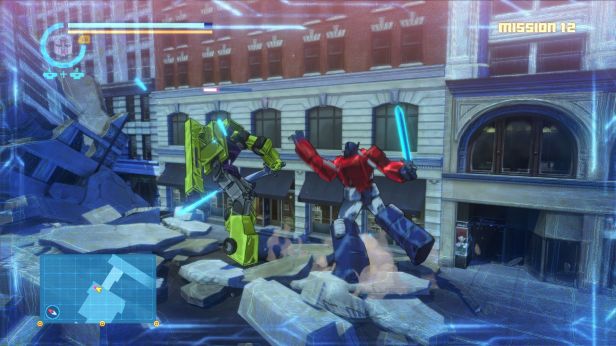 Even worse, chapters reuse the same areas of the city, with the same branching paths. Without anything larger than the mini-map it’s easy to get lost and retreat a same-y looking path, completely wasting your time.

I usually enjoy exploring in games and collecting things but for Devastation it was the opposite effect. I stayed close to the objective and was careful not to leave the primary path lest I stumble down an area I’d already explored.

Some of the areas proved extremely problematic when it came to combat, such as a tight-quarters bridge that surrounded you with large foes, as well as aerial combatants that you couldn’t even hit thanks to invisible walls. Aerial foes in general were horribly frustrating to fight, zipping around the battlefield and strafing you with laser fire while you watched helplessly.

I was already frustrated with the limited combat mechanics. You had a light and heavy attack, and when you hit things enough you could tap the dodge button to transform and ram your opponent. That was about it. A special attack meter charged up and did some impressive damage, which felt completely necessary during the tougher battles.

Combat was supposed to be augmented by the loot system. It felt super weird to have a random drop loot system in a game like this, and you couldn’t even check your inventory or equip things (or switch characters) until you reached specific, infrequent checkpoints or between chapters.

Being able to equip different kinds of weapons was a nice touch, but also made the different characters feel a little less unique. You could play as Optimus Prime, Sideswipe, and Bumblee, and later Wheeljack and Grimlock. It was a good mix of light/heavy/fast, though Wheeljack’s focus on ranged combat felt gimped given the game’s lackluster ranged attacks.

Anyone could equip almost any weapon, which had their own levels and stats. It felt half-baked and by the halfway point in the game I stopped equipping new weapons altogether since better ones never dropped.

Also I loved that the game let me play as Grimlock, but it felt super weird running with him and charging over ramps and through glowing circles that made him go faster.

I’ve never felt such a disconnect between a game’s look and feel and its actual gameplay. I adored how it completely pandered to its nostalgic G1 fanbase. Fighting Devastator, trading barbs with Megatron, reveling in Starscream’s inevitable incompetence. It was a fantastic recreation of the old cartoon, in stunning HD graphics.

But I honestly would have preferred to simply watch the cut-scenes rather than slog through the awful level design and frustrating combat of Transformers: Devastation. I’m thankful it was a very short game. For my money if you want the best Transformers games, that honor remains with High Moon Studios’ Cybertron series. 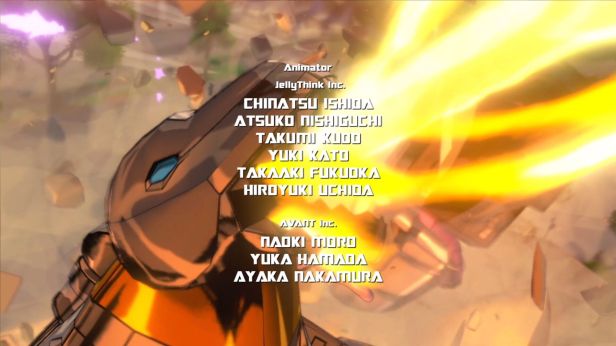