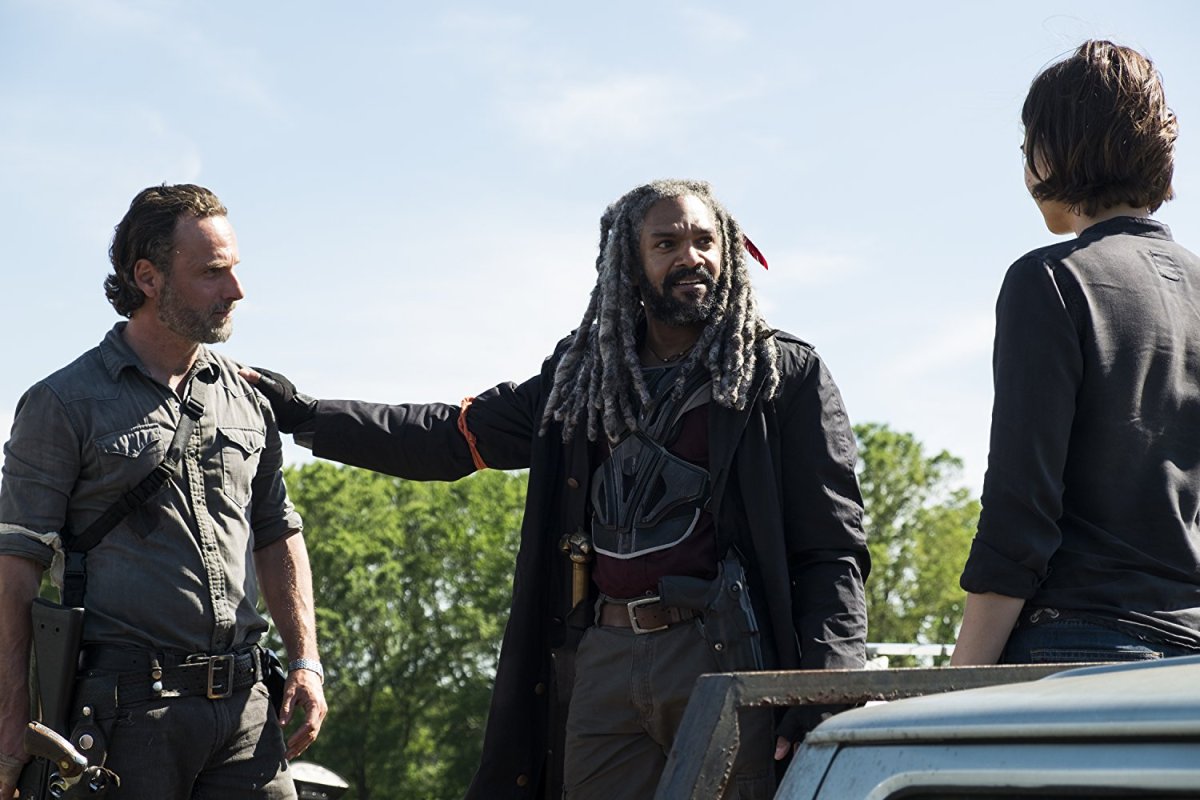 Normally you would see an excerpt of my Walking Dead recap here, and the full post at Polygon. Unfortunately Polygon didn’t get the contract ready in time for the premiere, so I’m doing it right here on my website. We should be squared away starting next week!

War. War never changes. But sometimes it weaponizes zombies. The season eight premiere kicked off the war with the saviors with some literal bangs, and like Rick, it gave me hope for the future.

We left off last season with our three main groups: the Kingdom (lead by King Ezekiel), Alexandria (lead by Rick) and the Hilltop (currently changing leadership in favor of Maggie) all pledging to join forces against the growing oppressive threat of the Negan-led Saviors.

After some rousing gung-ho military-style speeches (of which King Ezekiel’s dramatic theatrics are particularly well-suited), they moved to execute their plan: assaulting the Savior factory headquarters head-on with armored cars, machine guns, and a giant horde of walkers.

It was a two-pronged approach. They had seemingly planned all this off-screen while we got to jump right into the action, not unlike the premiere of season six with the quarry outbreak.

On one team was Rick, Maggie, Jesus, Father Gabriel, and lots of redshirts from Alexandria and the Hilltop. They took a fleet of cars armored with metal shields and drove right up to the Savior’s base.

They had cleared the way of enemy outposts thanks to intel from Dwight – which hilariously enough was supplied crossbow-to-crossbow between he and Daryl, our two marksmen.

When our team arrived at the factory they fired into the air until Negan and his lieutenants waltzed outside. Negan was cool and charming as always, mocking and berating Rick for trying to get all his people killed.

Negan’s only bargaining chip at the moment was Gregory, the mincing, sycophantic leader of the Hilltop. Gregory tried to talk the Hilltoppers into going home by threatening to kick them and their families out, but no one moved. Jesus declared that “the Hilltop stands with Maggie.” Even Rick had turned to her previously and said when this was over, he was willing to follow her lead on building the future.

Gregory’s plan failed and he was literally pushed aside. Rick gave them one last chance to surrender before counting down from 10 – then opening fire when he reached 7.

It was a fist-pumping moment. For so long we’ve seen our heroes get beaten, physically, mentally, emotionally, and to see them finally fight back was vindicating.

They shot the hell out of the factory, though all the Saviors seemingly made it out safe. Negan was the most vulnerable and Rick began to lose himself in his personal vendetta to kill him. Father Gabriel snapped him out of it. They had to leave – the zombie horde was here.

Step two of their plan was executed by Carol, Morgan, Tara, and Daryl, who were busy corralling a giant herd of walkers right up to the Saviors’ doorstep.

Daryl had easily the coolest job in the episode: riding his motorcycle just ahead of the herd (as he did in the S6 premiere) while firing a flare gun to keep their attention.

The herd arrived during the firefight, devolving the entire battlefield into chaos. But it was all part of the plan, and our team made it out, save one – Father Gabriel. As he was leaving he spotted Gregory, and jumped out of his car to help him.

We know that Gregory is a giant fuckwit; he’s proven that every single time he’s been on screen. Unforutnately Father Gabe lacks that insight, and is shocked when Gregory leaps up, jumps in the car, and drives away, leaving poor Gabriel royally screwed.

In the final moments of the episode Gabriel runs through the horde, finally reaching an open door. He gets inside only to hear Negan’s pants-shitting speech that was so prominently uttered in the trailer. I don’t think Gabriel is long for this world.

This entire scenario echoed the comics pretty closely, though it seems to go even better for our team. At one point Carol and Morgan split off to join Ezekiel and the rest of the Kingdommers in their own raid against a major Savior outpost. This is a large scale war with multiple battlefields and factions, and will hopefully make for a much improved season.

The most interesting aspect of the premiere were the frequent flash-forward glimpses into a happy future. These softly-lit scenes featured an older, bearded Rick, hobbled with a cane but living a comfortable life with Michonne, Carl, and an older, talking Judith. We also get other, very brief glimpses of a sweaty, injured Rick, speaking about how his mercy prevailed over his wrath.

This is all important foreshadowing surrounding the fate of both Rick and Negan, and the show is quite blatantly teasing it out. I expect we’ll see Rick grow and evolve over the course of the season as he learns how to care about people again – and not just his people. The scene between he and Carl with the random babbling man at the gas station is proof that Rick has a long way to go when it comes to trust and mercy.

The Triumvirate of Rick, Maggie, and Ezekiel – Our three groups have some great leaders. Rick remains the star but each one had some lovely speeches to give and moments to shine.

Daryl – Our badboy hasn’t had much to do lately. Sure he’s done the whole motorcycle horde-leading thing before, but I still loved seeing it again here. Plus, trading notes via crossbow bolts!

Hope – Yeah it’s corny, but after a season of getting their asses kicked, this episode felt far more hopeful than anything we’ve seen in a long time.

Father Gabriel – I hate to put Gabe in the Losers corner just for being a nice guy, but he did hear that awful speech Gregory gave threatening the families of the Hilltoppers. Gabriel’s gradually been redeedeming himself since he warned Dianna about our group when they first arrived at Alexandria, but he made a bad choice here.

Michonne – We’re making Michonne stay at home, really? She doesn’t strike me as the kind to kiss her boyfriend goodbye as he leaves for war.

Gregory – He’s a completely spineless asshole who keeps on surviving despite everyone hating him. Hopefully Gregory is bound for an inglorious death very soon. I’m just tired of him.