Loki teams up with Dr. Doom when the Asgardians move to Latveria, requiring Thor to save the day. 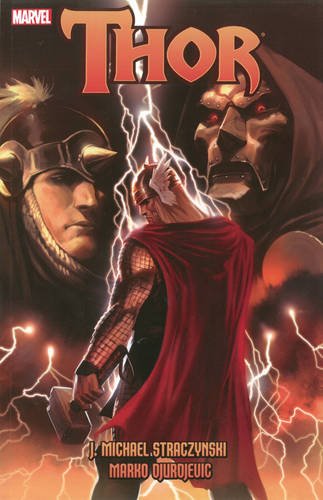 I’ve realized a common theme in my enjoyment of Marvel comics – if Dr. Doom shows up, everything gets better. Every Marvel writer has a great concept of Dr. Doom as a megalomaniac narcissist, and he makes every damn series or story he’s involved in that much more enjoyable and fun.

Thor is no different. We left off last volume with Balder becoming king of Asgard while Thor has been banished for having to put down his grandfather Bor (whom was monstrously resurrected by Loki, naturally).

Loki brokers a deal with Dr. Doom to allow sanctuary for the restless Asgardians, currently still housed in a floating, remade Asgard in Oklahoma. Things go predictably bad and Thor has to return to save the day, but the action at the end is a lot of fun, and Doom’s unyielding confidence is just the best. 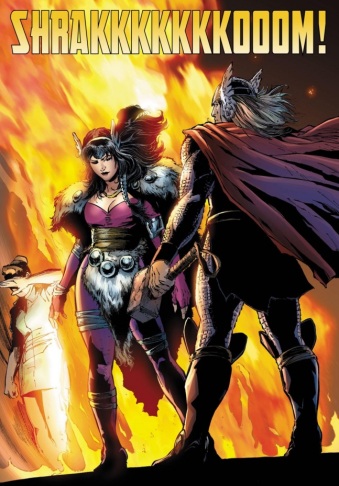 The first two issues focus on the two main side plots of Kelda’s relationship with native Oklahoman cook Bill, and Thor’s discovery and rescue of Lady Sif, which happens strangely quickly and matter-of-factly.

The Bill-Kelda romance blossoms and evolves in some surprising ways, and quickly becomes integral to the main plot – the Asgardians discovery of Dr. Doom’s nefarious plans with the Norse gods. It’s actually pretty weird that all the Asgardians just chill in Latveria while Bill rides off on a horse to do some investigating. He discovers the horrifying vivisection and experimentation being done on various kidnapped Asgardians.

He pays for the knowledge with his life, but warns Balder in time. This leads Kelda (the one female Asgardian that’s shown aside from Lady Sif) to go off half-cocked in a rage and get taken down by Doom, while everyone else goes to war with Doom’s new half-Asgard, half-robot creations.

Unfortunately Straczynski left with all his pieces still spinning in the air, and Marvel brought on Kieron Gillen to finish things out with Latverian Prometheus. Usually this ends in disaster, but Gillen does a decent job finishing the tale with essentially one giant action-packed battle in Latveria. 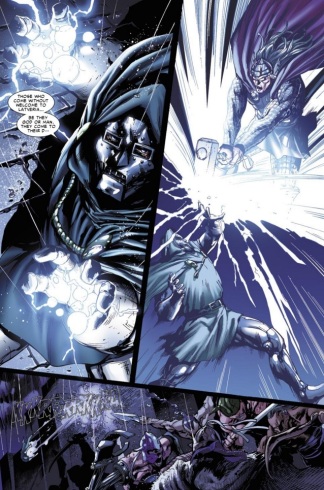 Just when the Asgardians are getting overwhelmed, Thor shows up to kick ass and take on Doom. Doom ups the ante by revealing his ultimate creation, his own personal Destroyer (like in the first Thor film). The two duke it out like only gods and robot-god-destroyers can.

Loki, ever the sniveling manipulator, puts himself back in good graces by saving Kelda. He comes out looking even better when he saves Dr. Doom from being killed by Thor, and swears his plan went perfectly despite Dr. Doom losing the battle. I find Loki’s smarmy attitude incredibly annoying and wish someone would punch him in the face, which I suppose is a decent tactic when writing and drawing a villain.

Aside from the awesome climactic action scenes, the other treat in these issues are the very funny moments involving the Warriors Three, Thor’s Asgardian buddies.

They get a chance to rescue Donald Blake, Thor’s alter-ego, when Doom sends his initial attack of souped up Doombots after him. It’s an attempt to take out Thor when he’s most vulnerable, but Sif and the Warriors are there to save him. The Warriors, including the rotund Volstagg, are hilariously written with tons of jabs and jokes, both which each other and the native Oklahomans.

Despite some odd story beats that makes all of Asgard look like trusting idiots, these final issues brought Straczynski’s Thor saga to a decent conclusion. Like Greg Pak’s run on Incredible Hulk, I never thought I’d particularly care about a Thor solo series. Some great art and supporting characters make the titular Norse god one of the least interesting characters in his own series – and I mean that as a compliment.