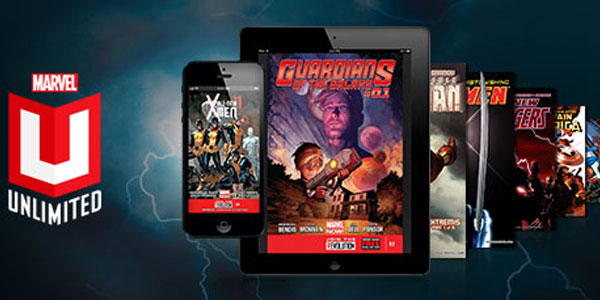 In December of 2014 I tried out a month-long trial version of digital comic subscription service Marvel Unlimited. I immediately fell in love with the speed and voracity with which I could devour decade-old comics at a fraction of the price. I quickly signed up for the full year-long subscription.

For my birthday in July I received an iPad, which further solidified my love of the digital format. I still prefer physical media for just about everything else (and have since still purchased many collected volumes and trade paperbacks), but comics work beautifully on a tablet.

If you’ve been reading my blog for any length of time, you know that I read quite a bit of comics and write my thoughts about them here. I started at the beginning of the modern age of Marvel, defined by the era of major events beginning with “Avengers Disassembled” in 2004. In the last year I’ve made it through approximately four years of comics, through the Dark Reign period of 2009 – though I’ve clearly had to pick and choose which series and characters to cover.

For a full list of all the comics I’ve written about, see the Comics section at the top of the page. As a fun anniversary post I listed my favorite comics I’ve read in the last year below, covering that 2004-09 era.

War Machine’s first solo series really caught me by surprise with how much I enjoyed it. At only 12 issues it introduces everyone to the damaged but fascinating cyborg-soldier James Rhodes. It tells a complete story involving the then-current events of Norman Osborn’s Dark Reign, with lots of nifty political overtones and themes. It’s telling that it was written by one of my favorite Marvel writers, Grek Pak, whom you’ll see further down on this list.

If I had to name my favorite new character from this modern age, it would be an easy answer. On the surface a young female clone of Wolverine is a stupid concept, yet Christopher Yost and Craig Kyle really struck gold with X-23. Laura Kinney’s backstory is dramatically revealed in X-23: Innocence Lost, where she’s tortured and trained as an emotionless assassin since birth. The story continues in a really cool direction with teenage X-23 in Target X. Laura’s a really intriguing character that feels like a great addition to any team, whether its New X-Men or X-Force.

As a writer I tend to focus on the storytelling with each comic series I read. That’s not to say I don’t appreciate the art, it’s just more difficult for me to convey why I like or dislike a particular style.

Well, I love Mike Deodato’s work on this Thunderbolts run written by Warren Ellis. Between Civil War and Dark Reign, Norman Osborn was given a team of ex-villains that were used to subdue and capture non-registering superheroes. That took a backseat to the inner conflicts and drama that arose when you put a bunch of asshole villains on the same team, and the story builds to a really fantastic climax – Venom has never been scarier, and Songbird ends up being a great protagonist to root for. A fun little story but an especially amazing artist showcase.

Since the catastrophic events of House of M, the X-Men have been kept out of the loop from most of the major Marvel events and crossovers. They have their own big problems to deal with, and that really comes to a head in their own crossover event, Messiah Complex. No less than four ongoing mutant series tell the story of the first mutant birth since M-Day, and the various factions that race to save, exploit, or kill her.

While it’s a bit messy with four different artists (some with wildly different styles), it does feel like a major game-changer for not only the X-Men, but mutants everywhere. It launched several new series, including Cable and X-Force, and relocates the X-Men to San Francisco, and later to Utopia. Lots of fun giant mutant battles, and a great example of Cyclops evolving into a natural combination of Magneto and Xavier.

6) The Death of Captain America

How do you continue a solo series when you kill off your main hero? Ed Brubaker shows us how: Mostly by having a great supporting cast and an interesting new hero – ex-Winter Soldier and Cap partner Bucky Barnes.

The fallout from Captain America’s murder rocks the Marvel world, but Brubaker keeps his nose to the grindstone. We’re given a dramatic, focused story about Sharon Carter, Black Widow and Falcon as they uncover a huge plot by the supervillain team-up of Red Skull, Zola, and Dr. Faustus. The art is fantastic, the action fun, and the story stands on its own without having to include any outside major events or characters. It’s also a massive book with 20 issues!

I knew absolutely nothing of Marvel’s cosmic stuff prior to getting Marvel Unlimited. I never heard of Richard Rider, and now Nova is one of my favorite heroes. The first big cosmic event, Annihilation, set the stage for an epic battle against an evil army, but I slightly prefer the follow-up, Annihilation: Conquest.

Annihilation: Conquest has the better villain (Ultron!), better tie-ins, and a fantastic climax that requires the combined might of all our heroes – not to mention creating the best cosmic team, the Guardians of the Galaxy. It has everything I want out of a major cosmic event, and instantly made me a fan of Marvel’s space operas.

Marvel had a pretty solid partnership lined up when they signed beloved nerd auteur Joss Whedon to pen an X-Men series. Astonishing X-Men starred a smaller cast and operated well outside every other Marvel comic and event.

What we got was a fantastic story that gave us several great new characters (Danger, Abigail Brand, Armor, etc), fantastic relationships (Emma Frost and Cyclops, Colossus and Kitty Pryde) and some great stories that took the X-Men on an emotional meat grinder into space and beyond. 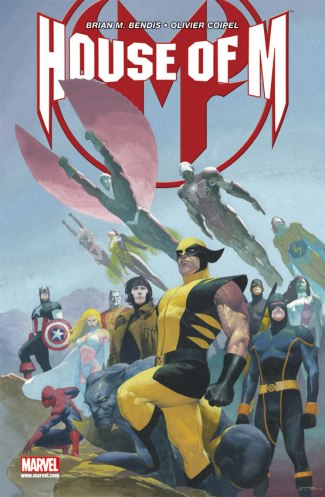 Looking back, House of M was the first major crossover event that really kicked off the modern marvel age. “Avengers Disassembled” planted the seeds but House of M completely took over, and proved what a successful major event can do for sales and series.

It’s also a crazy cool What IF alternate world story that puts mutants front and center. The tale of Wolverine remembering everything and recruiting everyone to stop Scarlet Witch is a great hook. The aftermath of “No More Mutants” has become one of the most famous moments in comics, and its permanent effects rocked through the Marvel world for years to come.

You know that comedic TV Show you love? The one that washes over you with a soothing sense of familiarity? You think of the characters as extended family members, and their personality and drama makes you both laugh and cry.

Peter David’s X-Factor is basically that show, in comic form. His work is nothing short of amazing. The silly Multiple Man character becomes a compelling and fascinating protagonist in Jamie Madrox as he and his dysfunctional team of mutant-specializing investigators try to solve problems and help people.

Evil corporations and fun villains overshadow entire volumes like Seasons of a TV show, and David does a cool time traveling-twist during his turn on Messiah Complex.  The relationship between Madrox and Layla Miller is one of the best written in comics. There’s a reason the series would continue on for an impressive 8 years and over 100 issues – it’s really fucking great.

I never gave two craps about Hulk growing up, but I’m very glad I gave him a chance here. Greg Pak writes my favorite Marvel comic story when the Illuminati of superheroes ships Hulk of into space. Hulk lands on a planet teeming with life in the throws of its own Roman-esque civil war.

We get Hulk as a gladiator, then freedom fighter, all in the backdrop of an awesome, wholly original alien planet. Planet Hulk is as much a sci-fi epic as a superhero comic, and a full 13 issues lets you really dig into planet Sakaar’s politics, religion, and ecology. The artwork is incredible with monstrous aliens and clashing armies, and the Hulk has never been a more three dimensional, complex anti-hero.

For someone that never cared about Hulk to suddenly hold one of his stories in such high regard is at testament to this comic’s greatness.

There you have it! Let me know in the comments if you agree or disagree with any of my picks, or have any recommendations from the era. This will be a fun list to revisit next year when I’ve hopefully gained another couple years of Marvel comics under my belt.