Bendis continues his run of Avengers with the post-Dark Reign Heroic Age, including time-travelling villains and the Infinity Gems. 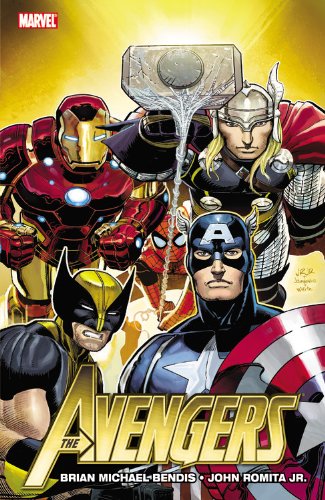 Siege finally brought an end to Norman Osborn’s Dark Reign over the Marvelverse. Between the Civil War, the Secret Invasion and the Dark Reign, Marvel wanted to return to a simpler time of heroes versus villains, and so The Heroic Age was born.

The Heroic Age brought a reunion of many of our original Avengers like Thor, Captain America, and Iron Man, a team that hadn’t been together in over five years. Annoyingly, Wolverine also joined the team, despite also joining the concurrent New Avengers series and still being a member of the Uncanny X-Men and the new Uncanny X-Force. Spider-Man is also on both Avengers teams, what the crap.

The newly restarted Avengers series also gave us the old-school stylings of John Romita Jr, which I will readily admit to not liking. The heavy lines and flat faces just look odd, and the action never feels particularly dynamic.

The first volume thrusts our initial team of Thor, Iron Man, Bucky-as-Cap, Spider-Woman, Hawkeye, Spider-Man, and Wolverine into a time-distorting, dimensional-ripping, world-ending plot thanks to Kang the Conqueror and a future war with Ultron. There’s a funny moment where Kang appears and does the whole end of Back to the Future, “It’s your kids, something’s gotta be done about your kids” bit.

The plot goes in some confusing places, as most time-travel stuff does. The team recruits Noh-Varr, AKA Marvel Boy. I loved Bendis’ portrayal of the hot young stud that’s completely unfamiliar with Earth sayings and mannerisms, even though I’m pretty sure the Kree warrior has been around for years. Noh-Varr builds a time-machine and half the team goes into the future to investigate while the other half tries to deal with the insanity of time-ripping dimensions across New York City. 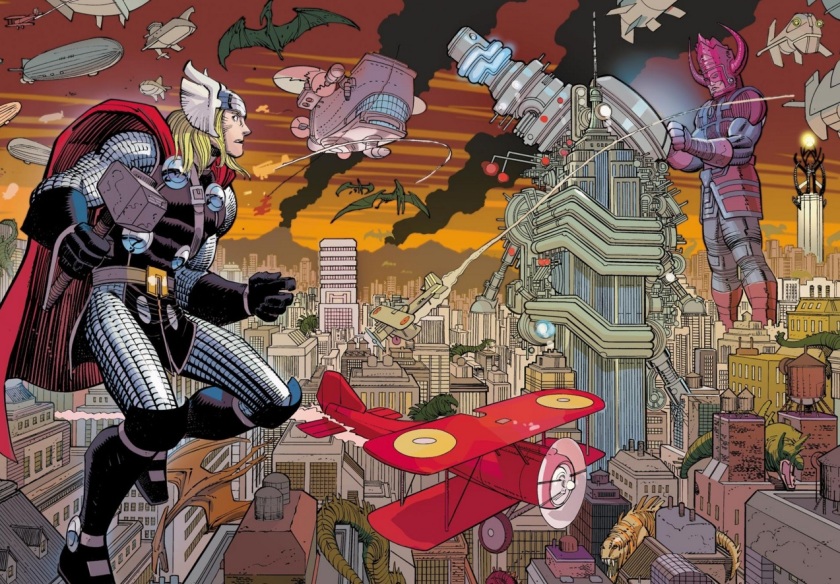 Normally this would be a fantastic backdrop for some grand scenes of destruction. But I don’t like Romita’s art style, so all that action fell flat for me. At one point the team fights Apocalypse and a crazy mutated version of his horsemen, and again the art just doesn’t do it justice, and Bendis writes Apocalypse all wrong (which is weird as he’s always great with Dr. Doom).

The future team meets up with old man Iron Man, old Hulk, and their kids (not THEIR kids, second generation Avenger kids in general). It delves into Kang’s history and backstory as a “time terrorist.” Finally they figure out this was all started because Kang kept pulling in heroes and villains from various timelines to try and defeat Ultron during his eventual rise to power in the future. Since Kang has power over time he can simply keep trying the same fight, and essentially destroys time itself. What a jerk.

After lots of hand-wringing the Avengers decide the only thing they can do is simply talk to Ultron and explain the situation. Since most superhero comics involve giant fights, I actually enjoyed this little twist at the end. They convince Ultron that if he resists and fights Kang, eventually everything is destroyed. So he has to lose on purpose. Ultron isn’t a dumb villain, and eventually agrees to fight again some day. 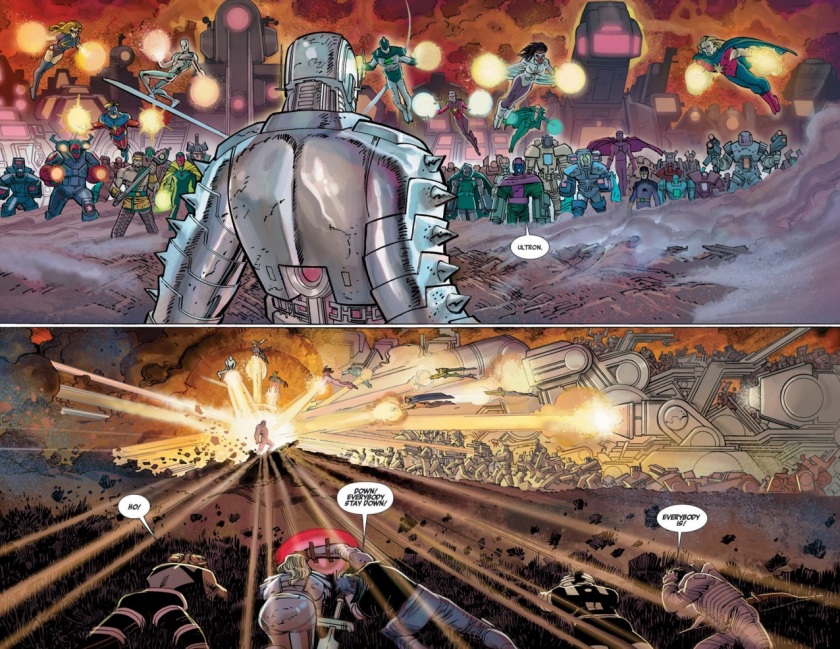 Bendis’ writing remains enjoyable. Nobody does inter-team banter as well as he does and I suspect the main reason he keeps dragging Spider-Man and Wolverine along is for their comic relief potential.

Volume 2 centers on a villain that Bendis desperately wants us to care about – The Hood. The former demon-possessing street-level villain rose to power during the Civil War and Dark Reign, and Bendis just can’t seem to let him go. He’s not a bad character but neither is he particularly compelling.

Here he manages to escape from prison and begin collecting the Infinity Gems, which were carefully guarded by each member of the Illuminati – Professor Xavier, Namor, Iron Man, Mr. Fantastic, Dr. Strange, and Blackbolt. The world has changed quite a bit since we first met the team years ago when they shipped Hulk off into space – mainly that Blackbolt is dead and the Inhumans aren’t even on Earth anymore. The Hood knows this, and their’s is the first gem he finds nestled where Attilan once stood.

The best thing Volume 2 does is add in Red Hulk, a character I’ve surprisingly enjoyed. For reasons that are never quite clear, the former General Ross takes a personal interest in stopping The Hood, and promptly gets his ass kicked after Hood acquires two gems. He swallows his pride and goes to the Avengers for help. 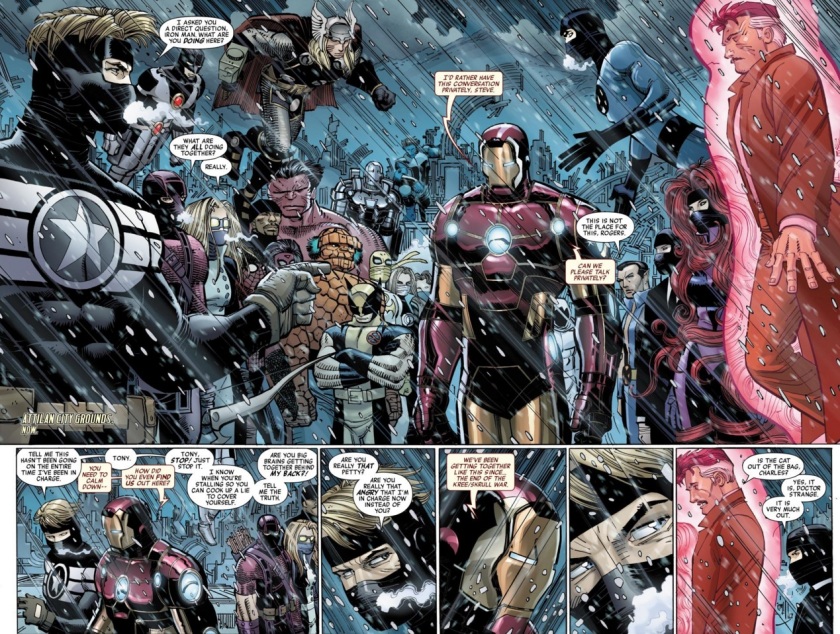 Stark gathers the Illuminati together to trace The Hood’s steps in gathering the gems. Commander Steve Rogers follows them, and we’re treated to the long-time-coming confrontation between the secretive Illuminati and the rest of the superhero community.

Rogers is understandably upset that a group of people (all men as Medusa points out) would take it upon themselves to make these big decisions – like hiding away the Infinity Gems. It’s a neat moment and Bendis is unafraid to have long, drawn out conversations for multiple pages. It helps that these pages are some of the best drawn of both Volumes.

The rest of the Volume is a race as our heroes split up to recover the last few gems before The Hood does. They acquire a few and have a big fight at the end against a powerful, but still vastly in over his head villain. The Hood is no Thanos, and wields the gems with reckless strikes rather than their full potential. 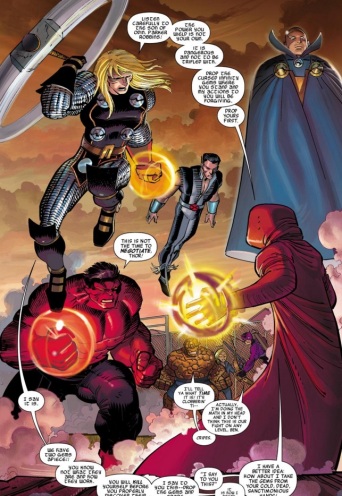 So in the end it simply comes down to a large fight, and our heroes eventually win thanks to Red Hulk swiping one of the gems. Iron Man whips out the Infinity Gauntlet, gathers the gems, and uses the power to reset everything back the way it was, honky dory. He then pretends to will them out of existence.

In secret he doles out the gems to his secret group once again. This time he includes Steve Rogers, to which Steve grudgingly acquiesces, which I found a bit odd. The whole arc felt rather pointless and surprisingly tame for involving the Infinity Gems. But Red Hulk does get to join the Avengers as an official member, and he seems like a good fit.

In terms of classic heroes versus villains, this Avengers series definitely checks all those boxes. I wasn’t a big fan of any of the villains that Bendis uses and I couldn’t get into the art. The actual dialogue remains enjoyable but overall it’s probably one of the weaker Avengers arcs I’ve read since I started reading comics again.