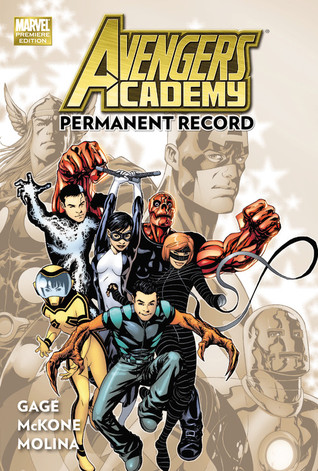 A Young Adult series starring the next generation of Earth’s Mightiest Heroes has been done before, as recently as Avengers: The Initiative. While the Initiative series was mired in large events like World War Hulk and Secret Invasion, Avengers Academy is given ample time to breathe and grow during Marvel’s post-Siege Heroic Age. The result is one of the best YA, coming of age stories in Marvel comics.

Avengers Academy stars half a dozen wide-eyed, super-powered teenagers, all of whom naturally developed gifts and were starting to get molded by Norman Osborn during his Dark Reign. When Osborn went down, these kids were identified as high risk, and the most likely to someday become super villains – a fun plot twist the kids themselves find out in the first issue.

Thus Hank Pym starts the Avengers Academy. It’s obviously analogous to the X-Men’s own School for Gifted Youngsters – particularly the excellent New X-Men comic that ran from 2004 to 2008. The X-Men’s school has been shut down since the 2008 event Messiah Complex, however. I’m glad to see Avengers Academy pick up the “young kids with powers” story, and do so incredibly well with it.

It starts with the students. The class has six students, and remains a small ensemble throughout the first two volumes. Each of the first six issues that make up Volume 1, “Permanent Record,” are narrated by a different student, letting you inside their head and identifying with their past, their anxieties, and their hopes for the future. 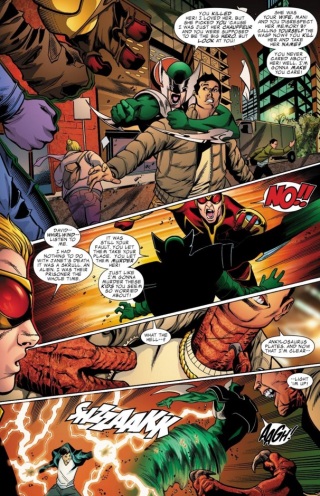 Veil can turn her body into gas, and is slowly dying thanks to Osborn’s experiments to augment her powers. She’s nervous and unsure. She’s doe-eyed for one of the instructor’s (Justice), highly impressionable, and painfully relatable.

Hazmat is radioactive and completely toxic, with a personality that’s understandably the same way. Not only can she not touch anyone, she has to remain in a special suit that cuts her off from everyone else. She’s desperate for a cure, and hides her vulnerability beneath a snippy attitude.

The electrically-powered Striker has an interesting backstory as the bastard son of a rich gold-digger, and a child predator survivor. He has some major impulse and aggression issues, but deep down has a good heart.

Finesse has Taskmaster’s powers – she can replicate anything she sees. She’s incredibly confident and smart but lacks human empathy, and wonders if she’s in fact a sociopath. Mettle was a laid-back surfer bro before his ability manifest in the form of hideous metallic red skin. He’s sensitive and kind, despite looking like a total monster.

Finally, Reptil is the de facto leader and has my favorite power – he can transform any part of his body into various dinosaur parts. How cool is that? He’s the closest thing to a traditional good guy in the team, but he constantly doubts his leadership.

The instructors are a classic list of B-team Avengers that writer Christos Gage nevertheless does fantastic work with – Hank Pym (who goes from The Wasp to Giant-Man, an even stupider costume), Tigra, Justice, Speedball (formerly Penance), Quicksilver, and Jocasta. Gage perfectly explores all the major issues surrounding these characters, from Tigra’s son with skrull-Pym to Speedball cutting himself to activate his Penance powers. The instructors, particularly Pym and Tigra, are given ample panel-time and fully develop into equally fascinating characters. 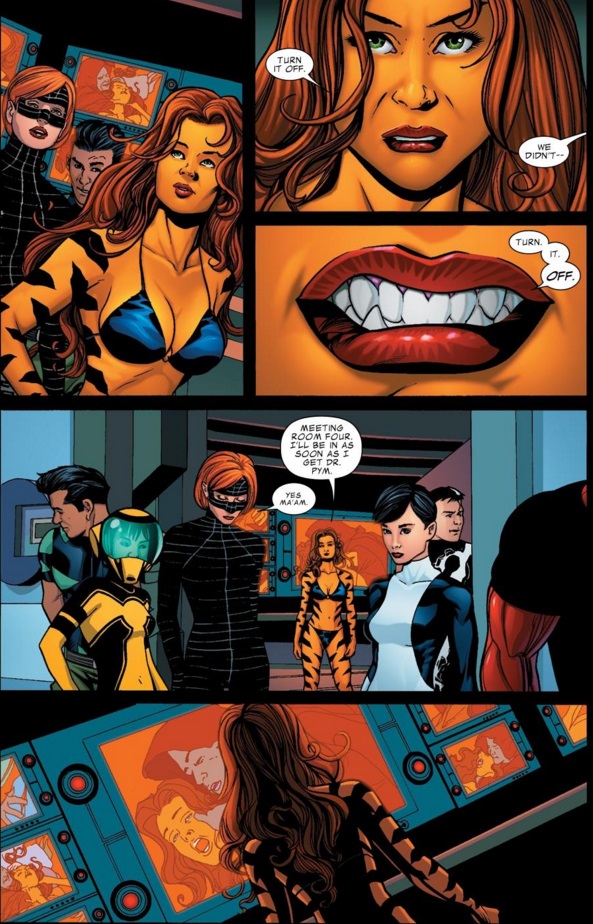 The plot of Volume 1 takes a back seat to character introductions, and the series is very well served by it. Initially the kids are taken aback by their supervillain-wannabe status. When they take a “Scared Straight” field trip to The Raft, half of them confront Norman Osborn, either ready to kill him or get more information. They learn from the experience, and I love that the focus is on their own ethical quandaries about what it means to be a hero.

The second volume, “Will We Use This in the Real World” gets really interesting as Gage continues to explore some hard-hitting topics. Back in New Avengers Tigra was captured and briefly abused and tortured by The Hood. The whole thing is on the internet and Gage doesn’t shy away from Tigra’s anger and shame. The kids find out, and half of them track down The Hood and beat him up – filming the whole thing for Tigra. 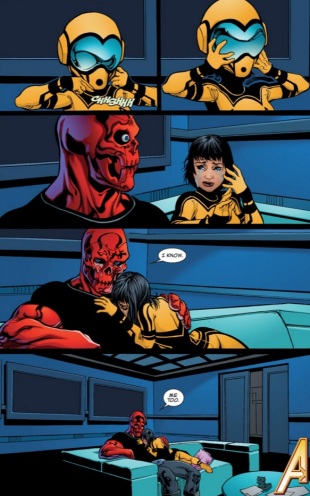 Naturally she’s furious and expels them, though cooler heads prevail. The academy is about learning, and the kids need to learn from such a terrible, decidedly un-heroic tactic. Themes of abuse, victimization, and revenge are treated with the utmost respect while still being compelling and interesting. Gage has shot to the top of my charts as an amazing writer that can tackle these very difficult, very real issues so eloquently.

Even when things get a little comic-book silly, the writing is still grounded in real teenage struggles. Veil decides she needs to redeem herself, and picks up where Pym left off in trying to resurrect Janet’s scattered atoms (she was killed during the Secret Invasion).

Of course it goes terribly wrong, and the person she brings back is…Korvac’s wife? I’m not terribly familiar with classic Avengers villains, but Korvac is your classic all-powerful dimensional cosmic entity. He’s Bad News, and shows up to abscond with Carina, who’s sick of his shit, heh.

It’s an excuse for all the Avengers to show up and battle him with flashy purple explosions everywhere, while the kids are escorted to a safe room. Carina has powers of her own, however, and plucks adult versions of all the kids’ bodies so they can battle Korvac. It’s fun temporarily seeing our dysfunctional team as full-grown badasses. It’s also incredibly sobering, as members Hazmat and Mettle are crushed to learn they’re still in their untouchable states – and Veil is nearly completely ghost-like. 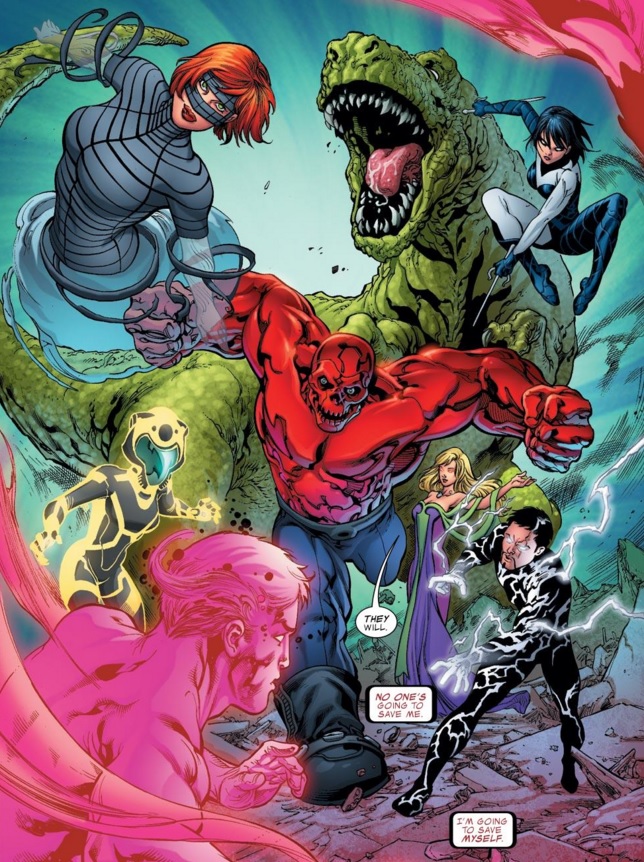 Given how time stuff works in Marvel, Carina reminds us it’s just one possible future, and even when Striker is killed she can simply restore him back to his teenage self – though the result still freaks everyone out. Normally I roll my eyes when all powerful villains show up and battle our team, but the problems that are created from our young protagonists’ glimpse into the future is fascinating. Also, issue 13 is prom, and it’s one of the most fun bits of teenage drama I’ve read in a long, long time.

I was completely blown away by Avengers Academy. The disciplined focus on our six young heroes (or are they villains?) provides some amazing characterization and view points about growing up, sacrifice, and heroics. The art work is consistently vibrant and fantastic, even when the art changes hands. It’s an incredibly relatable read for any young person or adult who deals with anxiety, doubt, and finding yourself in the world. And it’s a hell of a lot of fun.