Volume Seven acts as a prologue to Secret Invasion as our heroes reel from the discovery of a disguised Skrull and the implications of a major Body Snatchers-style invasion. 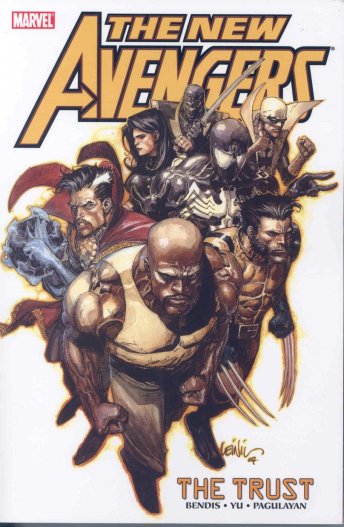 Poor New Avengers. You started off as the primary Avengers trade following the events of “Disassembled.” Then Tony Stark won the Civil War and the rebels of the New Avengers went underground, refusing to register but also not wanting to disband. Stark built his own government-sanctioned Mighty Avengers team, leading to two concurrent Avengers trades for the next few years.

So far Mighty Avengers has benefited from all the big stories while our rebel team mostly picks up the pieces and ties into the story-lines of their bigger brothers, first briefly in the “Ultron Initiative” then directly during the “Venom Bomb” crisis. More importantly, this seventh volume acts as a giant extended prologue to the then-upcoming major event Secret Invasion in 2008 as our heroes reel from the discovery of a disguised Skrull and the implications of a major Body Snatchers-style invasion.

“The Trust” revels in the horror (and dark comedy) of the team suddenly unable to trust each other after revealing that Elektra was really a disguised skrull at the end of the previous story arc. Spider-Man especially gets some genuinely funny dialogue (“Maybe I’m a skrull? Or maybe all of you are skrulls and I’m on the universe’s weirdest reality show”). The first few issues involve the roster of Dr. Strange, Hawkeye (as costumed ninja Ronin), Echo, Wolverine, Spider-Man, Luke Cage, and Iron Fist arguing amongst themselves.

Spider-Woman defects from the team during the violent weather attacks produced by Ultron during the first story arc of Mighty Avengers. Her plan is to take the skrull body to Tony Stark to make him aware of a possible invasion. The rest of the team is justifiably worried that Tony Stark could easily be a supplanted skrull himself. The plane carrying the team goes down in a lightning storm, leaving Spider-Woman able to take down a wounded Wolverine and escape with the body (and we later see her carry through with her plan to talk to Tony Stark in Mighty Avengers #7), and at that point she officially joins with the Mighty Avengers.

There isn’t much of an actual plot for the first few issues until we’re introduced to a new villain organization, organized by The Hood. The Hood, a dual-pistol wielding, demonic entity powering badass, gathers a bunch of D-list bad guys into trying to form a criminal organization to take advantage of the fractured superhero community.

Since the Mighty Avengers are tackling bigger problems, our group takes on the Hood’s head-on. It’s also approrpriate as the New Avengers roster includes some of the more well known “street level” heroes like Luke Cage and Iron Fist. The gritty battles and dialogue scenes are accentuated by Leinil Yu’s incredibly stark, pencil-heavy art style.

Yu took over as the main artist for New Avengers after Civil War and the dark shaded art provides a very strong contrast to Mighty Avengers‘ bright, typical tones. In fact this style is more in line with experimental stuff you’d see on random solo books rather than a major Avengers tie-in series. Kudos to Marvel for differentiating their two Marvel books, and really making New Avengers a unique and fun read.

The story concludes in New Avengers Annual #2 as The Hood’s gang assaults the magically hidden sanctum of Dr. Strange that’s acted as the Avenger’s hidden base of operations. They found the location through a very uncomfortable side plot involving beating, torturing, and threatening a completely random (and mostly naked) female hero, Tigra. Heroes getting brutally beaten is nothing new, but the violence factor is suddenly ratcheted up to a degree that hadn’t been seen previously (or again, as in the final battle), and takes on a very sinister tone as our heroine is mostly naked throughout and one of the bad guys is filming it and taking pictures, so that the rest of the bad guys can cheer and laugh. Ugh.

The Hood threatens to kill her and her mother as revenge for a previous attack she had foiled, and they use her again to get the location of Dr. Strange’s base. At least in the end she does get to join in the final battle as the bad guys attack the New Avengers. Yu’s style lends itself more to moody dialogue scenes than standard comic book action, and indeed the art is best when it focuses on one-on-one fight scenes rather than grand multi-hero stagings.

Just as our heroes begin to lose the fight (they’re outnumbered at least two to one) an already wounded (like, presumed dead) Dr. Strange basically hulks out in demon form, taking everyone down but draining himself considerably. Only the Hood escapes, and Dr. Strange decides to permanently leave the group as he’s been losing more and more of himself in these events. 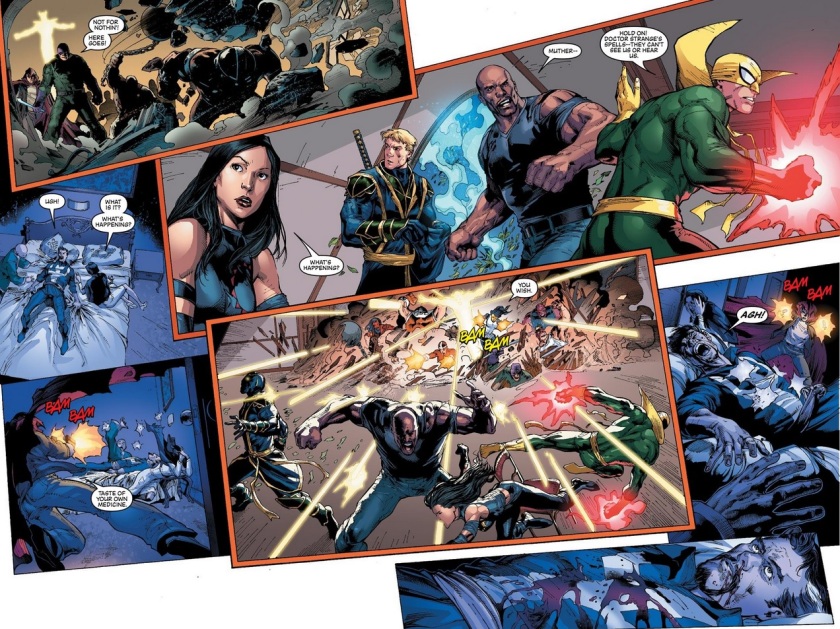 Ms. Marvel of the Mighty Avengers shows up with SHIELD to help incarcerate the bad guys, and to her credit she lets our rebel heroes escape. Of the villain crew only The Hood escapes, an intriguing villain I definitely want to see more of. Initially I was worried about the villain organization plot thread to merely be a minor stepping stone between Secret Invasion but it ended up with a fun, satisfying finale, and other than the super uncomfortable stuff with Tigra, I really enjoyed it. Yu’s artwork continues to be memorable and different, and our New Avengers are a fun team to read about with lots of varying personalities and witty banter. I certainly root for them way more than Stark and Ms. Marvel’s incredibly lame team, and look forward to their tie-ins to Secret Invasion, coming up next!