Logan’s soul is tortured in Hell while his Earthly body rampages with a host-demon in this killer start to his 2010 solo series. 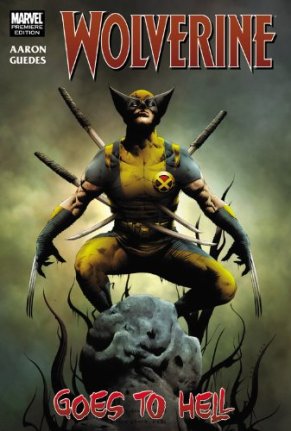 As a kid of the 80s/90s I love Wolverine. But at this point in 2010, Wolverine had reached peak saturation. He was in multiple X-Men series, multiple Avengers teams, a part of X-Force, then Uncanny X-Force, and still had his own solo book. He also cropped up in other series like Deadpool.

As I said, I like Wolverine, but it was all a bit much. I didn’t have much motivation to read his new solo series when I was getting plenty of him elsewhere. But I kept hearing good things about the story, so I gave it a shot. And holy crap, it’s pretty damn good.

“Wolverine Goes to Hell” is a pretty simple premise. A bunch of normal people who had been wronged by Wolverine’s many, many terrible deeds in the past get together. They get their hands on some occult stuff, trick him into a van (uh, yeah) and then rip his soul from his body.

His soul goes spiraling down to Hell, naturally. He’s tortured by a giant demon physically and mentally. Past loves and foes are brought forward and Wolverine goes through, well, hell down there.

Only about half the story actually takes place in Hell, however. The other half is what happens when a demon is put inside one of the most powerful mutants on the planet. Not good! Demon-wolverine goes on a terrifying rampage for several issues.

Mystique was part of the group of wronged people, but she defects. More of her story is told through Daken’s solo series. Both Daken and X-23 have strong ties to Wolverine (son and clone respectively) but their involvement in the story is only tangential at best. X-23 just has a few nightmares, basically.

Daken is revealed to have helped send Wolverine to Hell, but then turns his back on the group, faking his own death and forging his own path. I never cared for Daken before. He came off as the typical petulant, angry teenager. But here he’s more devious and interesting, even when he’s vehemently a bad person, manipulating people left and right. He’s like a bad boy vampire, though his initial story is surprisingly tame and a bit boring.

Back to Wolverine. Mystique looks up Logan’s girlfriend and together they try to piece together some allies, but demon-Wolverine keeps killing them. Eventually the Ghost Riders and Hellstorm show up, because occult shit is going down. Just like when magic shit goes down, Dr. Strange shows up.

Together they manage to capture demon-Logan temporarily and bring his soul back. Meanwhile Logan has his own battle in hell. Despite everything he goes through he continues to fight back, with a little motivation from his old Alpha Flight buddy Puck. It’s a neat comeback but not sure why poor Puck ended up in Hell.

Logan meeting his dad in Hell fell flat. Of all the arcs and emotions to go through, daddy issues is not one I need to see him face. Thankfully it’s over pretty quick. Wolverine ends up battling the demon and taking his giant ass sword. Then throws it away to get the hell out of dodge. Or dodge out of Hell, as it were.

The story clips along at a nice pace, and the art by Guedes is bright and action-packed. Not every story has to be a compound, intricate tangle. Sometimes a man just has to face his past and his demons, both figurative and literal.

The action technically continues in the next storyline, “Wolverine vs. The X-Men” (#6-9). When Logan returns he’s still wrestling with the demons inside of him. Cyclops and gang show up and just now realize what went down. They have to make the choice to try and save him, or put him down for good.

It’s a fun excuse to show just how post-Messiah Complex Cyclops operates: with cold, calculating designs. He makes the tough decisions because he has to.

I really liked the way the X-Men handle everything. From Cyke, Namor, and Magento trying to kill Demon-Wolverine to Rogue, Kitty, and others trying to invade his mind and save him. Nightcrawler and even Jean Grey/Phoenix have awesome little cameos inside Logan’s mind as well. There’s even time for some well-placed jokes when some of them dig a little too deep.

Unfortunately the art goes down the tubes. Daniel Acuna takes over duties and while it’s not terrible, it’s a noticeable step down from Guedes with less form and detailing.

Overall I really enjoyed this start to Wolverine’s 2010 series, which would run for a solid two more years. Jason Aaron has a great handle on the character. Despite Logan being damn near everywhere during this period, it’s looking like I’ll have to keep up with this series starring everyone’s favorite hairy Canadian.