The party goes toe-to-claw with an Umber Hulk, fights off a swarm of ghouls, and defends against air cult reinforcements.

At its heart Dungeons & Dragons is all about the dungeon crawl. Many groups might get more enjoyment out of role-playing with townsfolk or uncovering a mystery. But at some point, everyone’s gotta throw down inside a labyrinthine maze of danger and traps.

One of my favorite things about “Princes of the Apocalypse” is how cool and varied the dungeons are. Surprisingly my players skipped over the giant underground pyramid to explore the Northern end of the Temple of Howling Hatred. I can’t blame them. If I get a giant “GO HERE” main quest update, I try and go everywhere else first!

After their battle with some air cultists last week, they searched along the rooms surrounding the area. As boring as the Southern half of the temple was, the Northern half is host to all kinds of killer creatures.

The party headed West. By which I mean they lazily ambled in that direction after metaphorically shrugging on which way to go. They’re lucky there aren’t more traps to stumble upon….

Kalinaar found the ruined, collapsed corner that served as an Umber Hulk lair, while Miri saw the ceremonial door that was boarded up. Both felt dangerous – time to explore!

In the colllapsing ruins they charged forward. Dynamic lighting worked really well here as their sight was constantly limited. I teased some coins and shiny objects in the back, pulling them in like a moth to the flame. Then an Umber Hulk charged in from his hiding spot, and the fight was on. 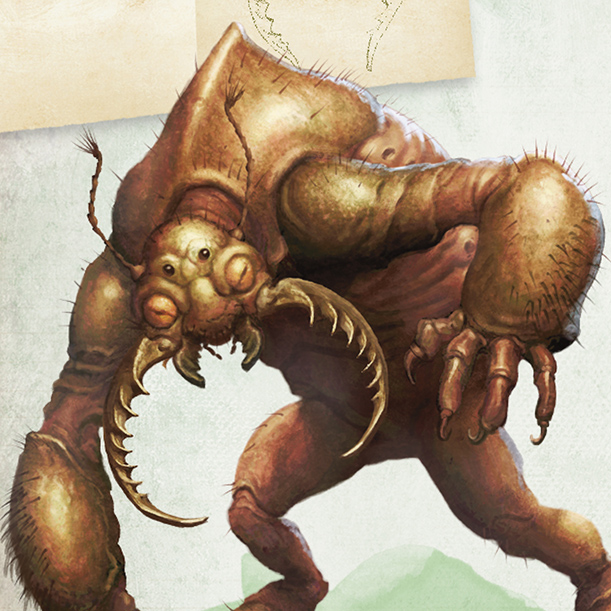 There are a select few creatures my party fears. The Flameskull, from “The Lost Mine of Phandelver,” the Wyvern they’d just defeated at the bridge to the pyramid, and the Umber Hulk. They’d previously battled a mutilated version after falling into a trap at the Sacred Stone Monastery, and it was terrifying.

This one was not mutilated, and I got to show off its Confusing Gaze. Now I’m pretty sure as a DM I can easily rule that its Gaze affects anyone it has Line of Sight with. However my players suggested I let them know which way it was facing so they could avoid it. This gave me an idea to actually incorporate its LOS as if it were an active cone, like a stealth game.

This may have made the Umber Hulk slightly easier to defeat, but it also made the battle more tactically interesting. The PCs had to flit around and use guerilla warfare, coming in and out, and flanking from different sides. They do a lot of damage – but so does the Umber Hulk with its +8 to hit and three attacks per round.

Kalinaar nearly went down under a flurry of blows, while Miri struggled to get her First of Unbroken Air to strike true (Umber Hulk has a +5 to STR saves, and I still barely saved both times).

It’s important to note that the party was also very drained of their resources. Talus retreated and actually searched for the shiny objects – how rogueish of him!

Instead of landing a potential killing blow on Kalinaar, I had the Umber Hulk tunnel over to where its horde was. I spread out the damage a bit more before it finally went down.

It was a dramatic and tense fight, with most of the party bleeding and heavily wounded. Delicious! They were rewarded with a decent horde of gold, and Talus found the electrum anvil and Immovable Rod. He promptly handed it to Kethra, knowing her potential for having crazy outside-of-the-box ideas. Everyone needs a Kethra in their party. I also awarded them both Inspiration for their prolonged dick joke involving the rod. Oh yes.

The party desperately needed a Long Rest. This is an interesting dilemma for a DM. At the one hand it’s no fun being drained of your resources, and each battle gradually becomes a slog. On the other being able to bunk down for 8 hours in a hostile dungeon shouldn’t be an easy thing to do.

I hinted that it looked like nobody had messed with the Umber Hulk or its lair recently. Bodies of air cultists suggests that they ran into it, and now steer clear. This made the area a decent resting spot. They also “piled up some rocks” to hide themselves. Okay guys.

I teased a search party looking for them, but otherwise they were undisturbed. Fully healed they bashed open the boarded door to the North, revealing a cemetery full of ghouls.

I sucked so bad with these guys! I always felt ghouls were a bit overpriced when it came to their CR/Xp level versus their actual danger. Sure they can paralyze you but it’s a pitiful DC. 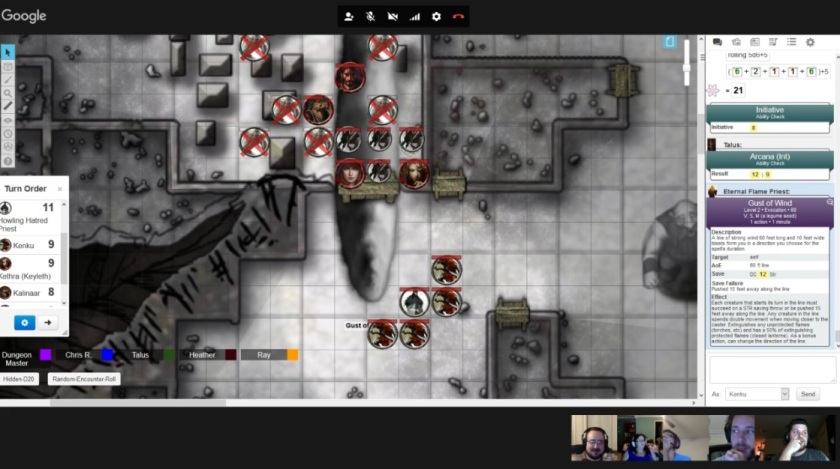 To spice things up, I launched a search party of air cultists at them right in the middle of the fight. The campaign book gives full guides to enemy patrols and reinforcements in the event of an extended stay in a dungeon (like a Long Rest). The air guys are relatively weak, and send only a single priest and four kenku.

Ironically as terrible as I did with the ghouls I was amazing with these Kenku!  These guys were total ninjas, ambushing the party and flinging arrows into Kalinaar. Even the damn Priest was able to throw a dagger successfully. The party quickly shut the door as the last ghoul fell and readied for the assault.

I was able to turn the tables a bit with an actual useful application of Gust of Wind, blowing open the door and creating a wind tunnel right through the middle. This gave disadvantage to the poor Kenkus but created an interesting terrain quirk that the PCs had to work around.

Talus decided to use the Pipe of Smoke Mephits. The little bastards were sent out and he used three of them to blind my entire enemy forces, making them pitifully easy to wipe out. Giving them a free once a day 4th level spell may have been a tad too much, but I think it’s a really fun tool.

Our session ended with the small air cult force defeated. Normally the party can only level up after a Long Rest – and only Long Rest at the end of a session. I knew that wasn’t going to sync up perfectly every time. Here I let them Long Rest but not level up until the beginning of next session. That way they still have time to learn their new abilities (and plug them into Roll2o). So next week – level 7 and further exploration of the Temple of Howling Hatred!