Matt Fraction concocted one of the most easy to jump into and satisfying new comics I’ve read in years. 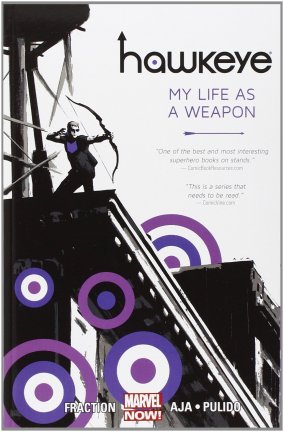 My comic reading has slowed down significantly this year, which is ironic given I’ve finally reached the era I’m most excited to read: Marvel Now, the post Avengers Vs. X-Men era that began late 2012 and ran until Secret Wars in 2015.

Since I began my grand comic catch-up in late 2014 I’ve been very excited to reach this era, which brought lots of new characters and fun new takes on existing characters, including Ms. Marvel, Captain Marvel, Thor, and Hawkeye.

Hawkeye’s previous claim to fame was that he died and was brought back by Scarlet Witch. He went through an existential crisis for a few years, including dressing as a ninja and calling himself Ronin. A new character became the new Hawkeye, a Young Avenger named Kate Bishop. At some point Clint Barton resumed his original Hawkeye-ness and became fairly boring again.

Then something magical happened. A new Hawkeye solo series launched as part of Marvel Now. It focused on Clint’s life when he’s specifically not an Avenger, and it turns out that life is equal parts humorous, emotional, and action-packed. Matt Fraction concocted one of the most easy to jump into and satisfying new comics I’ve read in years.

When not helping the Avengers save the world, Clint Barton hangs out in New York City as a street-level hero. He thankfully doesn’t dress up in his terribly dated purple-masked outfit. He mostly just hangs out with neighbors and gets into scrapes.

When one of his neighbors is getting bullied by her landlord, he ends up getting in a street war with the “Tracksuit Mafia.”

Clint is immediately likable with his pragmatic attitude, empathy, and incredibly quick wit. I’ve read Matt Fraction’s work before and it was fine. Here he completely lets loose with a series of easy-to-follow crime dramas that are full of heart. The very first issue has Hawkeye getting the crap beaten out of him, mostly to help save a dog who saved him.

Protip: Add a dog companion to add even more appeal to your gruff but lovable hero (example: Person of Interest). 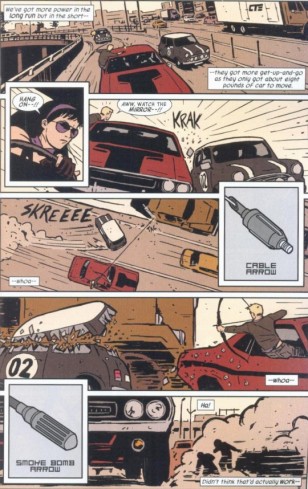 The fact that Clint doesn’t have superpowers is at the forefront of each issue. He’s very skilled and has some hilariously awesome tech-arrows, but even just gangsters with guns can pose a major threat. It’s refreshing to see a hero have to convalesce from wounds and sport bandages all over their body.

In the second issue Fraction adds Kate Bishop as a stalwart sidekick. Bishop was introduced years ago (now over a decade ago) as part of the Young Avengers line-up, one of the few YA-focused Marvel books that I actually didn’t care for. She had similar awesome marksman (markswoman?) skills, and took up the name Hawkeye.

Hilariously Fraction addresses this naming issue by letting both of them call each other Hawkeye (as well as just Clint and Kate). They have an endearing level of camaraderie that’s part mentor-mentee and part mutual respect over their abilities.

In the next few issues they get into a fun as hell car chase, defeat an evil circus troupe of thieves, and infiltrate a black market deal in Madripoor. Clint gets robbed, punched, and shot but never stops with the funny banter. Kate provides an excellent straight-laced foil to Clint’s shenanigans. I’ve never so badly wanted to take pictures of every page of a comic before (thankfully a quick Google Image Search more than satisfies). 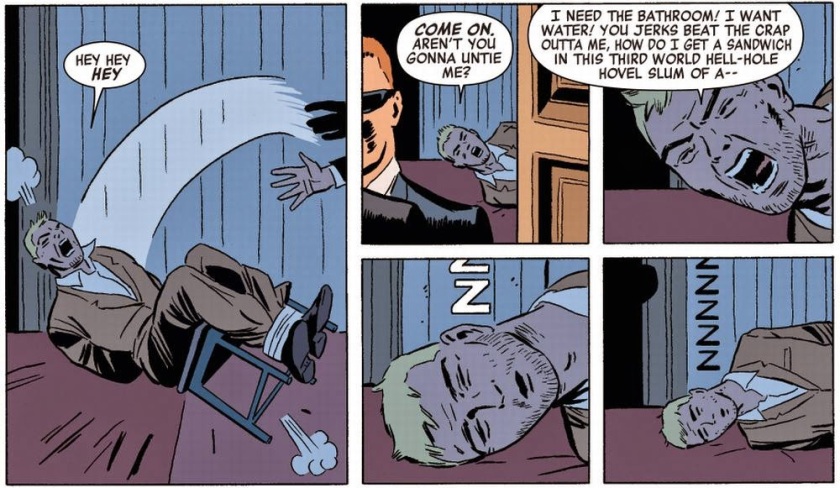 I was initially put off by the simplistic newspaper comic art by David Aja in the first few issues, but it serves the tone very well. It’s a minimal style that lets the writing and plot remain the focus. I already missed it when it changed artists for issue #4-5, which is always irksome (though Pulido’s style was similar).

A bonus comic is included that helps introduce Kate Bishop. It’s from the Young Avengers Presents series, where each issue focused on a different member of the team. 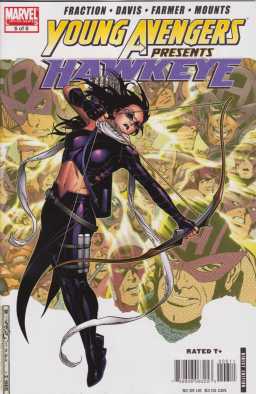 It was written in 2008 but can mostly be taken out of context (though you may be confused why Clint Barton dresses like a ninja). It does a decent job explaining who Kate Bishop is and establishing her initial relationship with Clint Barton, but it’s easily skippable.

Part of what makes Hawkeye (2012) work so well right from the start is its down to earth storytelling and relatable characters and situations. It’s incredibly easy to jump in and start reading – even if you’ve never read a single Marvel comic before. It’s the least superhero-y comic I’ve read in some time, and that’s actually a huge complement here.

It’s a story about street crime and two people (and a dog) trying to do the right thing every day while making you grin and laugh in almost every page. Hawkeye is absolutely brilliant and has already become the gold standard of comics. I’ll add my voice to the cheering masses and start recommending it to everyone.

2 thoughts on “Marvel Comics Final Thoughts – Hawkeye Vol. 1: My Life As a Weapon”