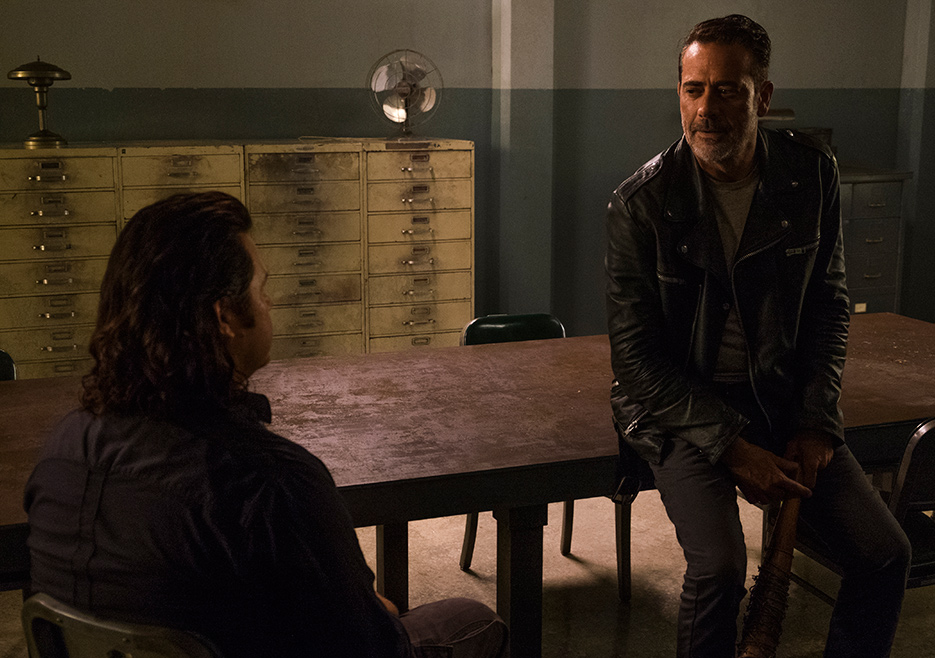 Remember when I recapped the Savior-focused episode earlier this season and mentioned it was fine, provided they kept those to a minimum? Well you done screwed up, The Walking Dead. Just two weeks later we get yet another extended peek into the crisis at Sanctuary, this time centering on Eugene, which makes it an even worse episode.

Based on our last look at the Saviors, I was lead to believe that the show would follow the comic route with Eugene escaping with the Saviors’ doctor (whom was taken from the Hilltop) to deliver him to pregnant Maggie (at the behest of Father Gabriel). Instead the actions laid out in this week’s episode pushed Eugene even further into the arms of Negan and the saviors, though with some notable alcoholism side effects.

Eugene actually has the balls to confront Dwight, telling him directly that he knows Dwight is the betrayer. Dwight doesn’t even try to deny it. Instead he tries to convince Eugene that the Saviors – Negan specifically – are losing and he needs to jump onto the winning side. 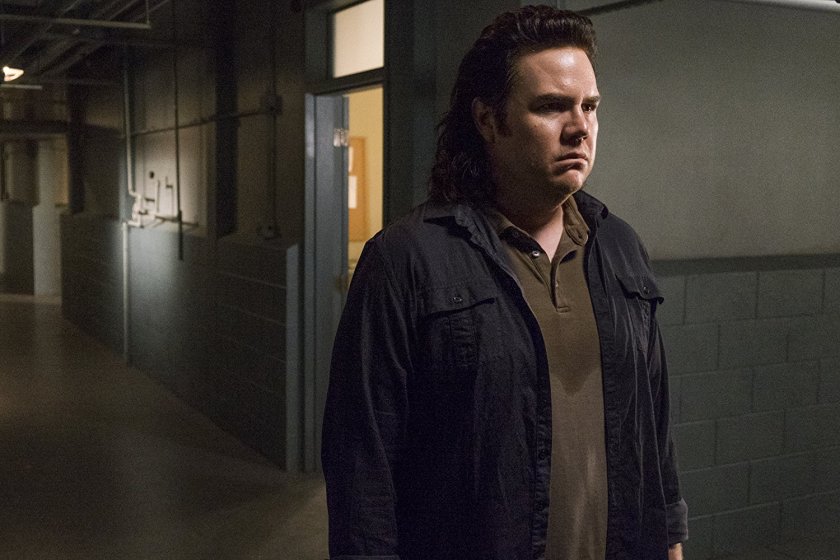 Eugene balks. The Saviors have been good to him, as has been painfully and repeatedly portrayed in some of the weakest episodes of last season. At one point Negan even holds his hand out to a sitting Eugene, who reluctantly reaches forward to regally kiss it before Negan guffaws in favor of a handshake.

Eugene has a plan to save them all, by attaching an ipod to a glider in the hopes of luring the zombies away. It’s a solid plan; we previously saw off-site Saviors attempting the same thing with a truck loaded with speakers last week.

Dwight catches him right before the launch and threatens him at gunpoint. But Eugene calls his bluff and launches anyway. Dwight easily shoots down the glider, then disappears. It’s a dumb scene of manufactured drama.

Then Team Wrath shows up.

Team Wrath was formed last week when Tara and Daryl met up with Michonne and Rosita. Their plan is to ram a garbage truck into the walls of Sanctuary, spilling walkers into the inside and finishing the Saviors off for good. Rick and Daryl actually got into a physical fistfight over doing this, and now Daryl (and Tara) are taking matters into their own hands.

Neither Rosita or Michonne want to go through with it, however. Rosita remembers what happened last season when Sasha went on her ill-fated personal warpath, and Michonne’s violent ways have been tempered since hooking up with Rick. They both bow out, but Morgan randomly shows up and steps in to join Tara and Daryl as a sniper.

The plan works perfectly. Daryl rams the truck and gets away with nary a scratch, covered by Tara and Morgan. Walkers pour into Sanctuary. The Saviors take the high ground and gun them down. Some folks are killed but otherwise it looks like the Saviors have a pretty good handle on it, begging the question why they simply didn’t throw open a door and create a bottleneck killzone to begin with (I predicted last week that the Team Wrath plan would not have its intended effect).

The most immediate effect is with Eugene. He flips out and goes to scream at the very feverish Gabriel, cementing himself as Team Negan. He vows to do whatever it takes to help the Saviors before drinking himself sick to the sounds of gunfire and screams. Are we supposed to feel sorry for him? At this point I have nothing but contempt for Eugene.

Meanwhile we get the continued side-story of Rick’s self-imposed capture by the Scavengers, led by Jadis. The Scavengers are an odd folk whom I desperately want to know more about. Jadis is a fascinatingly bizarre figure who seems far more clever than she acts. Or she’s just plain crazy.

Either way Rick is kept nearly naked in a shipping container, let out only so she can take pictures and draw him. They may be creepy junk-people but they’re also artists, damn it.

Rick is forced to kneel as the Scavengers bring out round two of the odd challenges they create for him: defeating a weaponized pole-walker. With his hands still tied together Rick kicks all of their asses in supremely satisfying fashion, culminating with ripping the head off the zombie and shoving Jadis’ head next to it. He’s had enough of this crap and so have we (no but really I want more dumb weird Scavenger stuff please).

This time the half-naked violence of Rick convinces Jadis that he’s on the level. She agrees to his terms to join forces, both sides fully aware that the Scavengers betrayed him last time. He goes to show them his handiwork in trapping the Saviors inside Sanctuary, only to find all the walkers gone and a truck-sized hole crashed in the side, courtesy of his buddy Daryl. Whoops.

Will the Scavengers remain on board with their tenuous alliance? Will Rick and Daryl have an even bigger lovers’ quarrel over how to discipline the Saviors? Will Jadis ever get her naked sculpture of Rick? Next week is the 90-minute mid-season finale and I’m hoping for a mini Empire Strikes Back as an angry Negan and the Saviors retaliate in full-force.

Rick Grimes: Rick’s half-naked adventures in Junktown are bizarre and goofy, but also an excellent reminder that Rick Grimes is still a huge badass.

Jadis: Jadis is just the right amount of weird to make every scene she’s in more interesting and unpredictable.

Eugene: The show has spent a lot of time using Eugene as our window into the Saviors and I’m just sick of it. This episode presented him as a man teetering on the edge and filled with regret, yet he continually sides with the Saviors despite how obviously shitty they are.

Team Wrath: I get why Daryl and Tara and Morgan are all royally pissed off at the Saviors. But, like Rosita, we know how fool-hardy and stupid it is to try and seek vengeance on your own. These three really need to chill the fuck out.