The last two weeks have focused almost solely on Rick and Michonne, and the drama surrounding Carl’s death. This week was entirely Rick-less as we check in with the other members of our group, finally converging together at the Hilltop.

Daryl, Tara, and Rosita lead Dwight and the bulk of the displaced Alexandrians. The shortest distance to reach the Hilltop is through a swamp, which Dwight warns that even Negan and the Saviors give a wide berth.

A swamp can be a nasty hazard during the zombie apocalypse. Sure enough once Daryl and Rosita began clearing the path, the zombies start rising up, giving me some excellent ideas for a future Dungeons & Dragons encounter.

Tara opts to stay behind. While Daryl seems to have mostly forgiven Dwight for his treatment when he was a prisoner, Tara is still stoking the fires of vengeance (Dwight murdered Denise with Daryl’s crossbow back in S6). She throws him a knife and the two go out zombie clearing, which is a painfully telegraphed move to get him away from the group so he can murder him. She half-heartedly tries, missing from a few feet away, and Dwight flees.

She catches up but before she can attempt to kill him again, a Savior patrol shows up. Dwight gives himself up and rejoins them, but doesn’t give up a nearby hiding Tara. There’s still the one Savior who witnessed Dwight’s betrayal and fled during the attack, but she hasn’t made it back yet, so Dwight is able to play the part of the long-lost Savior.

I was wondering if he was going to go back to them, as in the comics he never officially joins Rick’s gang, and as Tara proved, there’s still a lot of animosity there.

Daryl is super pissed that he got away. Who put him in charge anyway? He’s made fairly terrible decisions for several seasons now. In fact out of Tara, Rosita, and Daryl I wouldn’t trust a single one of them to make a good decision, and they’re leading an entire group of refugees!

Against all odds they’re able to make it to the Hilltop, where I’m reminded that a good number of our main cast are just now learning about Carl’s death – Enid (who breaks down and sobs), Maggie, Morgan, and Carol. I desperately want a poignant scene between Morgan and Rick, as two fathers who have lost their sons.

Maggie is dealing with some management drama as their food supplies dwindle in the plowshares to swords world they live in. She has to cut rations, and she’s more than willing to make the Savior prisoners take the brunt of the rationing.

The one Pretty Boy Nice Guy Savior tries to lay it on with the good behavior shtick, to allow them time outside the cage to work and exercise. Maggie balks initially but her rage felt from last season’s finale (when she pulled one of them out and executed them) has cooled somewhat. 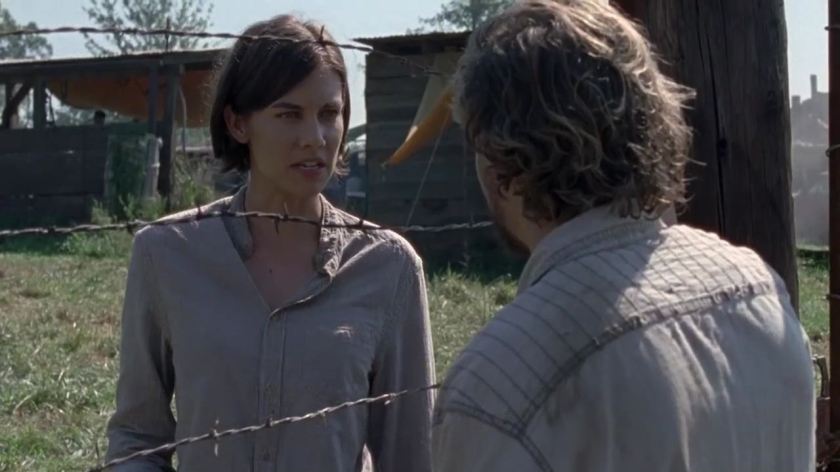 She’s finally won over when she sees how happy her group is with Daryl and the Alexandrians returning to the fold. Gregory suggests they pack up and leave, but Maggie knows that the Hilltop is their last stand, foreshadowing an upcoming attack.

A large chunk of screentime is devoted to the mini-adventure of Father Gabriel and Dr. Carson, as they flee the Saviors per Eugene’s assistance. Their car breaks down, and Gabriel leads them to a nearby house.

Their adventure plays on the theme of faith and holy guidance, as good things continue to happen to Gabriel at an almost comical rate (send that man to Vegas): finding antibiotics for his fever, accidentally discovering car keys and a map, and even rescuing Dr. Carson when he gets trapped in a bear trap with zombies nearby (continuing the theme that just regular zombies are no longer a threat, gotta have some sort of environmental hazard thrown in there).

Unfortunately their holy journey, luck, or the Force runs out when they finally make it to the vehicle. The Saviors have caught up with them, and throw them in the back of the truck. Gabriel tries to reassure them by saying something along the lines of ‘God’s plan.’ Dr. Carson seems to take this in entirely the wrong away, snatching their captor’s gun and committing suicide, leaving Gabriel a blubbering wreck. Ugh. He could’ve at least taken one of them out.

I realize happy endings, even small ones, are not exactly common on The Walking Dead but this one felt especially brutal, particularly as that makes a large chunk of this episode completely worthless.

Gabriel, who now has permanently damaged eyes because of the fever (?) is brought to Eugene. Eugene has been assigned to his own outpost to pump out bullets for the war effort, and he’s back to being a complete dickhole.

Eugene wafts between struggling to do the sort-of right thing and just completely embracing being an insufferable prick who buries any sense of decency with alcohol. I’m sick of his shit and I know I’m not the only one.

Negan is upset that Eugene can’t make bullets fast enough, and Eugene suggest lobbing walker parts over their walls medieval style. The expression that Jeffery Dean Morgan gives him is worth the price of admission to this episode alone. More importantly it gives him the idea from the comics – rub their weapons in walker guts to create deadly walker-poison. Basically creating insta-kill ammo and weapons just by grazing your opponent.

In the comics this was the chance for Dwight to prove himself to Rick and betray Negan by secretly refusing to coat the arrows. But Dwight’s already proven himself in the show. Since Eugene is there I wonder if Eugene will go through this arc instead. It would take a damn big redemptive arc to make me give two shits about Eugene at this point. Maybe this will give poor Father Gabriel something to do instead.

Father Gabriel: Yes technically he gets captured in the end and it’s basically all for naught, but he still had one of his best outings this week. He practically uses the damn Force when shooting a zombie attacking Dr. Carson.

Negan: Negan’s always been a unique brand of terrifying and hilarious, and he’s able to throw both around when dealing with Eugene this week. The end line is corny as hell (and even cornier that it’s referenced in the title) but if anyone can deliver it well, it’s Jeffery Dean Morgan.

Dwight: Dwight says all the right things at the right times. He wants to help the Alexandrians, he hates Negan, he’s sorry for killing Denise, and he knows his future is bleak. He runs from Tara to preserve his own life, and then doesn’t give her or any of them up to the patrol. We’ve seen him do some really bad things in the past but he’s proven himself a solid dude lately.

Eugene: I’m back to hating Eugene, though I’m not sure I ever really stopped. He treats everyone around him like shit, and is completely sycophantic with Negan.

Tara: Tara’s never been a particularly complex character, but she’s also never given anything to do. The whole Oceanside thing went terribly and now she’s not even the one dealing with them anymore. Her actions this week further limit her with a boring one-note revenge arc, and she can’t even do that well.