This week’s episode of Westworld was a return to relatively normalcy after the broad-reaching , densely packed premiere. Unfortunately it provided lots of additional backstory that I’m not sure we really needed.

Delores anchors the frequent, multiple time-line flashbacks of “Reunion,” beginning with a surprise flashback that goes all the way back to Arnold and Dr. Robert Ford.

We learn that the androids have been taken outside of the park before. Arnold shows Delores, who’s dressed in a modern cocktail dress, a unique home he’s building for his family, and she’s awed by the sights of the city. Knowing that her memories have started to awaken, this makes her one glaring weakness (naivety about the world outside the park), much more diminished.

Much of the flashback scenes fill in the holes between when William returned from his harrowing first park experience during the flashbacks in Season 1 to becoming the hardened present-day badass that is Ed Harris as the Man in Black. Yet it also felt like a lot of extra fluff. 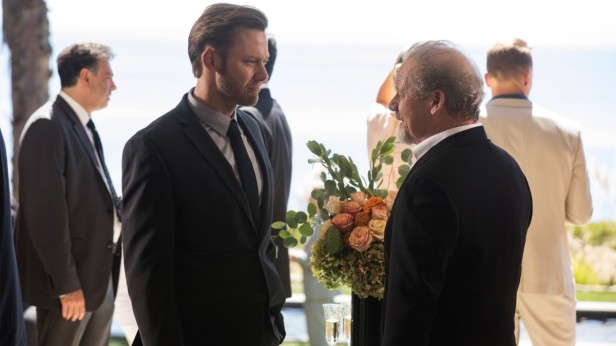 I didn’t really care about the scene where Logan Delos, William’s old friend and partner in business, first learned about the androids and the business deals they struck with tech company Argos to fund the park, nor the scene where we meet Logan’s rich old dad as he convinces him to invest in Westworld, even if it’s a decent excuse to reuse Ben Barnes and Jimmi Simpson.

During the end of the episode William has a one-on-one with a freshly awakened Delores, easily the best flashback scene of the episode. He’s post-Season 1 flashback here, and reveals to her his utter disdain for her and all the robots of the park, reducing them first to things, then to simply a reflection of their human makers, which is a theme throughout pretty much all AI stories.

Back in the present we follow two of our four main storylines and characters: Delores and the Man in Black. Both of them are seeking an army to build to head west to uncover the park’s secret weapon.

Delores and crew have made it to the behind-the-scenes underground portion of the park, where a crew thinks it’s still business as usual, until a scared patron (the one they let run away last episode) barges in, followed by Delores.

Do they seriously not have an alarm system, or like, cell phones? I find it crazy that a team of employees wouldn’t be aware that the entire facility is in chaos and open rebellion.

Teddy is upset at seeing the dead android bodies, and Delores shows him his history, and his own repeated deaths. He takes it about as well as anyone could expect. I’m interested to see where his character arc takes him, and Marsden does a great job emoting without actually given very much dialogue.

After a bit of torture Delores learns how and where the security team will respond to their uprising. They’re going to need an army to fight back.

She enlists one of the techs to work his tablet magic, and reawaken one of the Confederate soldiers. They travel to the army encampment, at one point meeting up with Maeve’s crew. This is, I believe, our first official meeting between the two since they’ve ‘awakened.’ 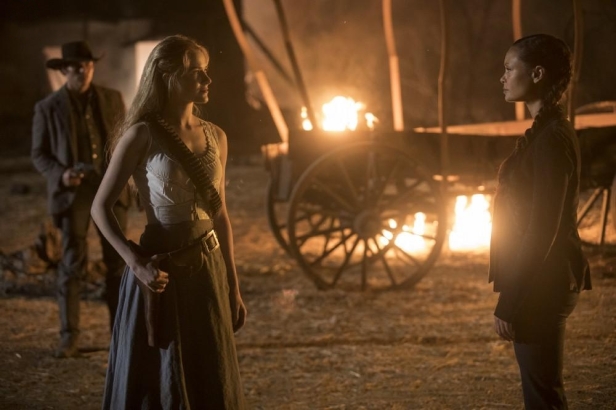 The meeting is ice cold and deliciously tense. Delores wants all the hosts to join her cause, but Maeve couldn’t give a flying fuck, she just wants to find her daughter and generally be left alone.

Maeve argues that Delores is fighting for freedom, so she must allow Maeve to be free to pursue her own goals. She’s allowed to pass, and presumably we’ll see more of her story next week.

Delores walks in on the Confederate army dinner. She had returned the slain soldier as a means to parley and gain their support, but the boss isn’t interested in serving a woman. He’s filled with sexist swagger and actually threatens to gang rape her. Lovely dude.

Delores throws it right back in his face, and orders her team to unload on the soldiers, killing them all in seconds. Then she orders her techie to reawaken the leader, giving the horrified soldier an ultimatum.

This was a great scene, and I particularly liked Delores caressing the back of  the scared man’s neck in a show of dominance and power, flipping the tables on the man.

At this point Delores is closer to a Messianic figure than a revolutionary. She promises a path to glory, but only if they agree to serve her righteous cause. Religious allegory anyone?

Meanwhile the Man in Black goes to visit an old friend, the much needed comic-relief offerings of Lawrence. MIB saves him from death by fireants, though once again we’re reminded that because the safeguards are off, MIB is not quite the ultimate badass we think he is.

Or, maybe he is. He gets shot but still overcomes a knife fight, then has a casual sit down with Lawrence over whiskey while he digs a fucking bullet out of his arm with a knife. Holy hell. 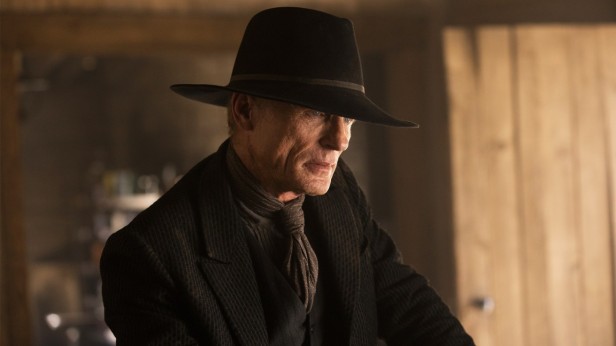 MIB reveals what had been teased last week with the DNA collection: that the park has been collecting data on its guests for decades. Past-William even uses that marketing research point as the major determining factor to convince his father to invest in the park. Not only do they have some hefty blackmail-material as they essentially spy on everyone, but MIB eludes to building something big based on the data.

But the Man in Black has had a change of heart regarding that collection. So his plan is to escape the park, then destroy it.

He and Lawrence travel to the town of Pariah, where he hopes to build his own army to get past the Confederates.

The Man in Black has generally had a pretty big advantage up until this season. He’s like a programmer playing his own game. He knows the park in and out, and all the parameters and characters involved.

Thus it’s shocking for him (and us) when things don’t go his way. The pair find El Lazo, played with attention-grabbing performance by Giancarlo Esposito. He gives a cryptic, but awesome speech about how powerful animals can be ‘taught’ to never break their bonds by using them when they’re small enough, eluding to the fact that some of the hosts will never be able to free themselves from their programming.

Instead of helping MIB, El Lazo and all his men shoot themselves in the head, leaving MIB shocked and army-less. I loved the “fuck you, Robert,” and MIB exasperatedly shooting the dead El Lazo. MIB reveals that where they’re going is something he built, not Dr. Ford, and that it’s his greatest mistake.

Clearly he’s referring to the mass clandestine data collecting, or what they’ve done with it. I think it’s also the weapon that Delores is referring to. This episode points to a race between the two as they try to reach it first, both with very different agendas.

Delores: Robot revolutionary turned robot Jesus, Delores is becoming more of a cult leader with each new recruit. Her methods are brutal but effective; nothing says ‘you’re the boss’ like being brought back to life.

Lawrence: I was thrilled to see the return of Westworld‘s closest thing to plucky comic relief. Lawrence doesn’t get a chance to actually be very funny this week but hopefully he’ll serve as a good foil to the ultra-serious MIB, the way Lee should for Maeve.

Delores and Maeve: Seeing our two leading host ladies meet up during the chaos of the rebellion was a treat, even for such a short scene. Despite both being fully self-aware it was almost hate at first sight, as Maeve represents the only host that Delores can’t willfully subdue to her side to join her cause.

Logan: The final flashback sequence focuses on the retirement party of Jim Delos, Logan’s father. Delores is attending the party, and witnesses Logan shooting himself up with drugs while drinking. He’s in a bad place, and is seemingly the only person who appears to be regretful about helping build Westworld, and the dangerous future with AI robots that they’ve concocted.