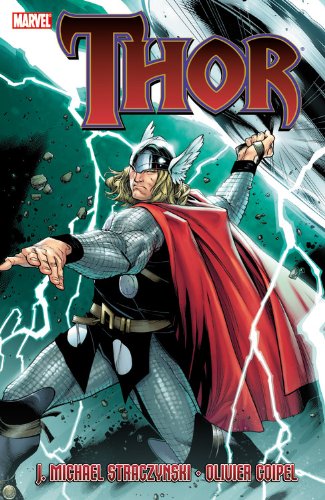 I’d never before read a Thor comic nor had any interest in the character growing up. I saw him as just a silly founding member of the Avengers that was based on a Norse god. When the Thor film released a few years ago I was surprised as anyone that this goofy figure would receive his own stand-alone big screen debut and was pleasantly surprised by how much I enjoyed the earnest, likable character full of his own unique lore and background.

Comics-wise Thor has been out of commission throughout the entire era I’ve been reading so far (2004-2007). Sometime around the events of “Avengers Disassembled,” Thor’s story went through Ragnarok, the life and death cycle of the gods, and ended with all of Asgard dying in an attempt to stop the endless cycle.

Thor is gone for a solid three years (an eternity in comic book time) before being reintroduced in this 2007 series written by J. Michael Straczynski (Amazing Spider-Man, Fantastic Four) and drawn by Olivier Coipel (House of M). The timing couldn’t be better for being introduced to the God of Thunder as he’s awakened by his old human host Dr. Donald Blake and summoned back to Earth. Thor quickly works to restore Asgard and find his fellow Asgardian warriors hidden away within stalwart human bodies. Thanks to Coipel’s fantastically heroic and bright art style Thor’s adventure leaps off the pages and becomes a captivating and fun quest despite the patient build-up and pacing.

Instead of following a standard six issue story arc, each issue of Thor is given its own titling, and feels more like progressive episodes of a television show rather than a constant stream of finales like most comics. While never fully explained, Thor is inhabiting the same body as Donald Blake, the man that originally became Thor. Blake has the power to turn into Thor by slamming a stick against the ground dramatically, and Coipel plays with this fantastical transformation in some fun, flashy ways (I’m getting fond flashbacks of He-Man – I HAVE THE POWER!).

By issue #2 Thor knows what he needs to do. Since he’s the last Asgardian left, he decides to build a new Asgard in a giant empty field near a small town in Oklahoma. Straczynski has a lot of really fun and funny scenes with the locals that mostly manage to steer away from country bumpkin stereotypes and just focus on the craziness of suddenly having the mythical space-city floating above the ground just down the street.

Not everyone is happy to see the God of Thunder back on Earth, and much has happened since Thor left, as Iron Man is quick to remind him. There’s a poignant scene where Thor visits a post-Katrina New Orleans (not the first hero to do that) and reflects on his absence and the things he could have done to help. Iron Man shows up to explain the then-recent Civil War and Thor’s need to register with the U.S. government (and also that the whole floating Asgard thing is viewed as a threat).

Thor responds by kicking Iron Man’s ass in a flashy battle of lightning bolts and lasers. Thor’s power has never been greater and he easily dispatches Stark, ripping off his helmet and threatening him to his face. While I’ve enjoyed Stark’s solo series, he still definitely comes off as a total asshole in everyone else’s comics and events and it’s very satisfying to see somebody simply stand up and say Nope, and Don’t Come Back. Stark saves face by declaring Asgard an embassy on U.S. soil and leaves it at that, at least until Asgard takes center stage in the Siege event in 2010.

Of course Thor isn’t content to roam the halls alone. His next order of business is to find and free his fellow Asgardians, now also sharing mortal bodies. He finds Heimdall in New Orleans after sensing his grief-stricken soul, and finds The Warriors Three in Africa as volunteer soldiers at a Doctors without Borders campsite. There’s a fun battle when Dr. Blake and company are attacked by a neighboring tribe, and he He-Mans into Thor and kicks everyone’s ass.

The concept of a normal person able to transform into a superhero is as old as the genre itself, but it’s amazing how fresh and fun it feels here. I also love how Coipel draws Thor with his super flat, broad, serious face, giving him an exotic and interesting look along with his iconic armor.

Thor’s search for Asgardians leads him into a battle with the Destroyer (the same robot thing from the Thor film, though much smaller here) and he finds yet another soul trapped in the monster, fueled by regret and rage. He also finds Loki whom he originally mistakes for Lady Sif – it’s female Loki! A fun twist on a classic character, though I imagine this transformation doesn’t last given Tom Hiddleston’s incredible performance and popularity to the big screen persona.

At the end of issue #6 Thor flies up into the atmosphere and releases a powerful blast, releasing all the Asgardians on Earth at the same time, for better or for worse, and draining himself in the process. Other than a brief scene showing Loki talking with Dr. Doom and a cabal of other villains there really isn’t much of a conflict yet.

Straczynski’s pacing feels like a slow, deliberate build up as he gathers all the pieces and sets the stage for future events. Because of the enjoyable writing and fantastic art I’m completely on board with this approach. I never though a Thor comic would become one of my favorites, but I’ll be damned If I’m not loving this series.