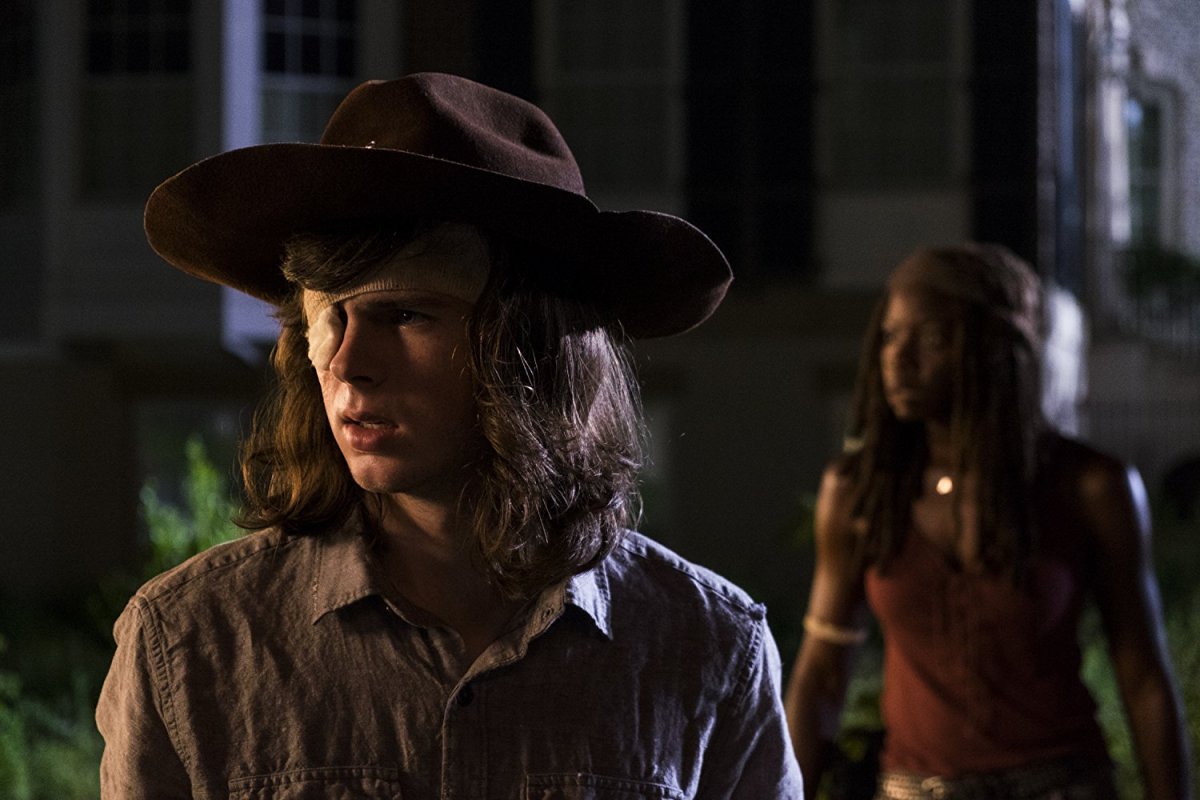 You deserve better than this, Carl.

The 90-minute mid-season finale unfolded pretty much as I predicted, with the Saviors striking back swiftly and brutally against all three communities. I did not expect it to end with a far left field bomb drop in the discovery that Carl has been bitten, and his days are numbered.

We picked up right where last week left off, with Rick, Jadis, and the Scavengers approaching the now walker-less Sanctuary. That’s a dumb idea; gunfire erupts from the building, and the Scavengers scatter. So long subplot that went absolutely nowhere!

Rick is pinned down, but somehow Carol and Jerry show up in a damn SUV to rescue him. Did I miss something? I have no idea how they knew they needed to be there to rescue Rick at that moment.

The action gets even more confusing, as we skip ahead to Rick driving on his own rushing back to Sanctuary, while Carol eventually shows up at the Kingdom, and Jerry is captured by Simon on the road to roadblock Maggie. It’s a rapid-fire montage that utterly confused me, as I initially thought all three were together and captured by Simon. I need a wall chart to track all this.

The Saviors split up their rampage of vengeance. Simon, the always amazing Steven Ogg, effortlessly captures Maggie on the road using the old tree-in-the-road trick, which Maggie sort-of catches but still falls into. Simon disarms them all and drags Jerry out at gunpoint (does anyone at the Hilltop actually know Jerry?). He reads Maggie the riot act, admitting they they still need the Hilltop to operate mostly independently, as it’s their main food source.

Simon gives Maggie the choice to turn around and go home, which begs the question what she was doing out in the first place? Was there a meeting I had forgotten about? Maggie ultimately grits her teeth and agrees. She’s got ice in her veins but she’s not stupid. Simon executes Neil (who?) as tribute, then lets them leave. 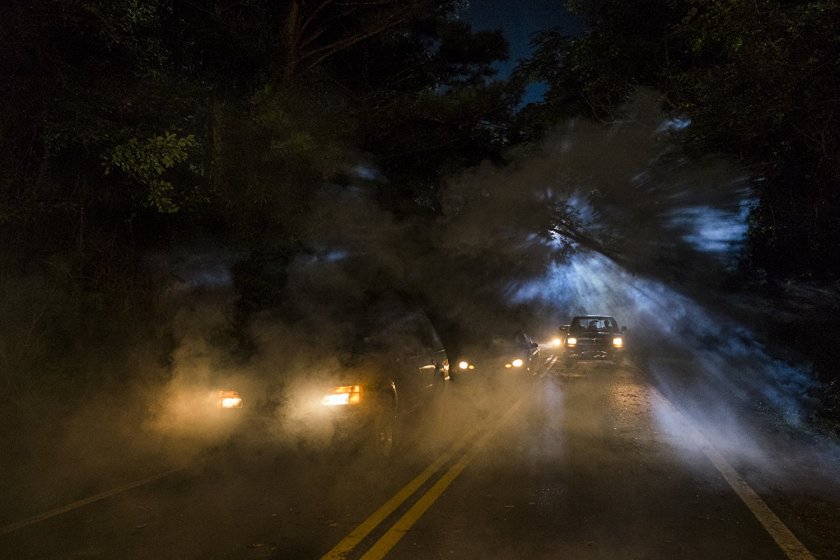 Maggie returns to the Hilltop to give us one of the best scenes of the entire season. She marches over to the prisoner pen and drags out one of the more unruly ones (sadly not that long-hair douche canoe who plagued Morgan). Just as this guy is prepared to scoff at her she executes him on the spot. Hell yeah!

At the Kingdom, they already suffered devastating losses, and can’t put up any kind of defense when Gavin’s team shows up (yes, I had to look up his name). Ezekiel goes into hiding while the few people who are left are rounded up in a Spartacus-style scene. No one is going to give him up.

Seeing his people in direct danger finally pulls the king from his funk. He sets off an explosion as a distraction, then crashes into the action with a bus, letting his people flee. Thankfully Carol is there to take charge of them, as Ezekiel stays behind to submit to capture. Morgan just sort of looks on.

What happened to Morgan? He went from insanely fighting his friends and killing Saviors to playing support sniper and tactically biding his time.

The bulk of the action takes place in Alexandria, where Negan shows up along with Dwight and Regina, surrounding and barricading the walled suburb. He wants Rick to come out so he can kill him and end this.

Rick takes the entire rest of the episode to make it back to Alexandria for maximum dramatic tension. It’s all up to Carl. Carl takes charge of the situation, telling everyone to escape while he distracts Negan at the front gate. 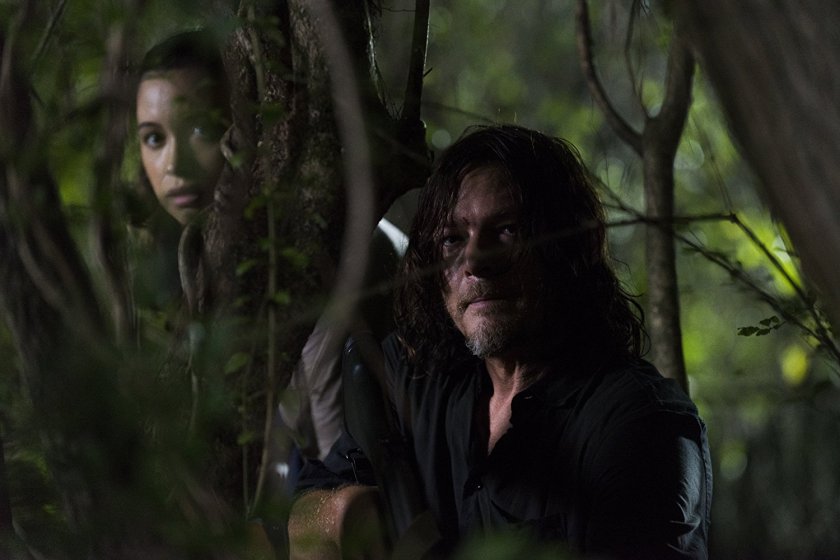 He offers himself up to die at Negan’s hands in order to stop the attack. It’s very noble, though the revelation we learn later sort-of hampers his intentions.

The plan works, thanks in part to Dwight using cars instead of trucks as roadblocks. Our team escapes through the back and flees into the nearby woods, with Dwight and Regina following.

Dwight’s defection is critical during this whole sequence. He leads his people right into an ambush set up by Daryl, Michonne and company, then seals the deal by turning his gun on his ex-people. Well, everyone but Regina who angrily shoots him in the shoulder before somehow escaping.

Both Daryl and Tara have a chance to kill Dwight right then and there, as they oft spoke of doing previously. But Dwight proved himself here, so Daryl simply takes back his vest while Rosita helps him up. It looks like Dwight is officially with our group now, which is a slight alteration to how the comics play out (if I recall correctly he operates from inside the Saviors all the way up until the climax/end of the war). 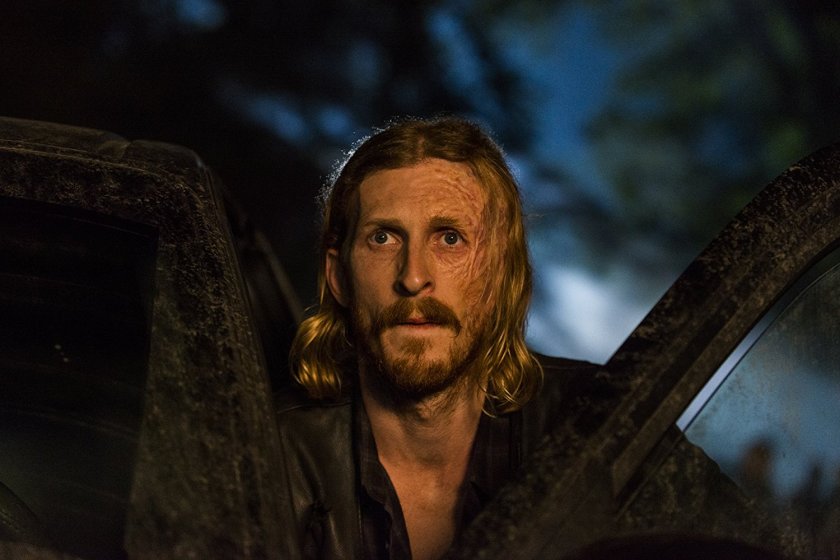 Meanwhile Carl is seemingly the only person left inside Sanctuary. Little did we realize this was his defining hero moment, which I think he shouldered admirably, though he’s given a seemingly endless supply of smoke grenades to escape capture.

Alexandria burns and explodes around him as the Saviors launch grenades, reminding me of the chaos and destruction wrought by the season six mid-season finale with the horde invasion of Alexandria. Carl eventually escapes into the sewers, leaving Rick to finally show up to tease an actual fight between he and Negan.

By returning home in the middle of a damn warzone Rick plays right into Negan’s hands. The two punch, kick, and disarm each other, neither really accomplishing much. Talk about your love-hate relationship. Rick is thrown out of a window in an awkward 50s Western style, where he simply gets up and stumbles away.

Michonne goes back for him, giving us the other cool scene of the episode when some rando grabs her from behind, and she proceeds to butcher the man mercilessly – which I believe is her first and only confirmed kill of season eight.

Rick finally makes it into the sewers where the surviving members of Alexandria hide out, only to meet a shocking revelation: Carl’s been bit. Apparently it happened when he and Siddiq were trying to kill a group of zombies. This is a definite shocker, as Carl is very much alive and kicking (and still a hugely main character) in the comics. 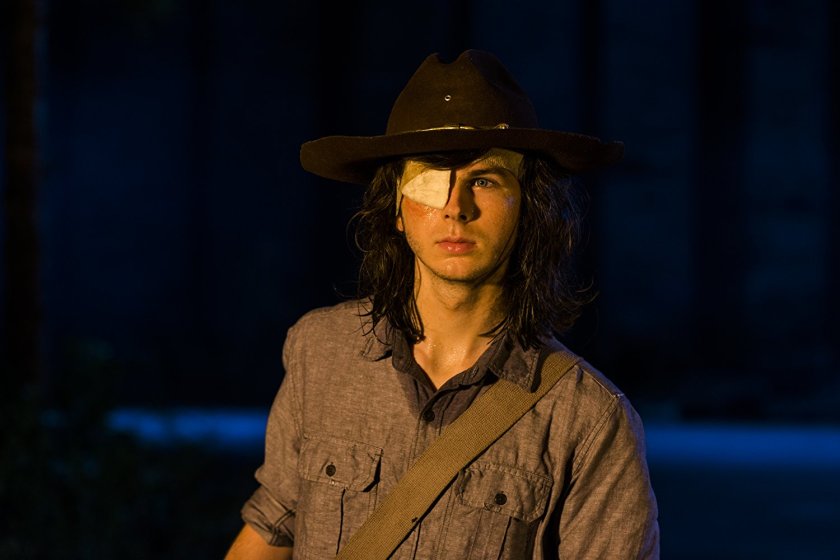 Carl’s death status is upsetting and irritating. It’s a huge shock for both comic and show fans. Carl is one of many characters with invincible plot armor, and one of the longest-tenured characters on the show, so kudos to the show for surprising even me with his soon-to-be demise.

But I legitimately liked Carl. Chandler Riggs literally grew up on the show, and did a solid job portraying a kid, then teen in increasingly zany situations. Instead of being petulant and angry and angsty, he was refreshingly well-grounded, empathetic, and decently wise.

But the story doesn’t really work without Carl. Protecting and teaching Carl has been Rick’s main motivation for years. I mean sure there’s Judith but she’s a non-character. It also makes those future-tease scenes a complete lie, and that royally pisses me off. As he proved this week, he deserved much better than this sad send off, and I fully expect an awful weep-show as Chandler Riggs departs after the next episode in February.

Maggie: Maggie gives absolutely no more fucks. She puts the prisoner she murdered inside the coffin Simon gave her with a deliciously antagonizing message for the Saviors. Maggie has been one of the few bright spots of the last year and a half.

Carl Grimes: As I mentioned above, Carl was a legitimately great character and consistently one of my favorites. He proved himself for the umpteenth time this week. He is sadly too good for this world.

“Catastrophically crapping his khakis”: I don’t like Eugene (see below) but this line made me stop and laugh out loud. Even a broken clock is right twice a day.

The Oceanside Welcome Gift: What the fuck are Enid and Aaron thinking? Going off to try and recruit Oceanside? They don’t want any part of you, hell Rick had to spend a day naked in a crate and fight pole-zombie to recruit the Scavengers, and they still turned tail the first chance they got. In our most subplot of subplots, we witnessed the most hilariously bad meet-up ever, as Gramma Oceanside gets the jump on Aaron at night, only for Enid to shoot her dead while the rest run up to them. That’s not going to go over well and I also don’t really care.

Eugene: I wrote this in my show notes: ‘just fuck off, Eugene.’ After wrestling with his inner demons (manifested as drinking wine at night) he finally decides to help Gabriel and the doctor after all, in the minimal way possible. And he still feels utterly conflicted about it. I am tired of all the time the show has invested on him.