In the spider-infested caves beneath Morgur’s Mound we deal with a demon in disguise.

I softly landed on the ground, glancing back across the chasm to nod at my companions. I crept up to the dead bodies, noting this area of the caves was seemingly the only section not covered in spider webs.

Movement out of the corner of my eye. I turned to see a young man emerge from a shadowy corner. He wore a garish red shawl that nearly covered his body head to toe, and his limp gait suggested he was injured.

“Are you here to save us?” He spoke weakly. My initial reaction was to move to help the man, but I remembered the hastily scrawled note we’d found in the dead mans hands.

I made no move. “Are you Jarys?” I asked flatly.

The man seemed surprised. “Yes! Thank goodness you’ve come.” He began to limp his way closer to me, and I caught myself stepping backward.

“What happened here?” I asked flatly.

“Those stone creatures, they killed my friends. I hid from them. They’re guarding this place. I can’t get out. But you can’t help me, can’t you?” It was a subtle change in his voice, and I caught it too late. His eyes glowed as his last sentence echoed through my mind like piercing light.

I blinked and the feeling faded. He looked at me expectantly.

I grinned. A battle of the mind? Very well.

I focused back on him, worming my way inside his mind until it lie bare before me. I inserted my will. He would not harm me nor my friends, and he would tell us exactly what happened here.

My heart sank a bit as he smiled back, even as I felt my will take hold.

“Clever,” he said, as his human form melted. He grew larger, turning a dark shade of red. Large horns sprouted from his head and a tail emerged from his back. “I will follow your commands. I will not harm you.” He whistled, the sound echoing off the cave walls. It was soon answered by terrible screaming coming from the depths of the chasm. “But my pets will.”

The mines beneath Morgur’s Mound weren’t as empty as we were hoping. The spider-infested caves gave way to a grisly scene, where a demonic creature had tricked an expedition into recovering the relic we were after.

We saw several bodies on the floor, cluing us into a recently ill-fated expedition. The guards at the entrance had been bludgeoned to death, presumably by the small army of rock constructs we’d defeated outside.

Spider webs blanketed the walls as we moved deeper. As we brushed too close to one web it exploded with swarms of spiders. Gross, but little threat to us. We took a proactive approach, blasting spider webs with cantrips and long-range attacks to clear our path.

This plan worked until we came to a small alcove. A body was clutching some items, but was surrounded in webbing. Our long-range assault destroyed some spiders, but the rest surged outward, at one point crawling all over Kazin and Bryseis. Korinn would use her Mage Hand to help brush them off Kazin while Bryseis used a Shield spell. After that it was squishing time. The body held a silver dagger and an ominous note. The note spoke of a mining expedition gone terribly wrong, as one of their members, Jarys, revealed themselves as a monster-in-disguise, killing the others and taking the artifact for himself. This poor bastard had fled only to be devoured by the spiders.

The caves turned toward the west. We noted some deep chasms cut into the ground, plunging about 30-40 feet into darkened tunnels.

I leapt across the chasm on the west side to investigate some more bodies, and a figure emerged from the shadows. He looked human, but spoke oddly. He played the victim but I presumed this was Jarys, and he responded by trying to cast a Charm spell on me. I made the Saving Throw, and responded in kind, casting Suggestion.

He failed. I commanded that he not harm me or my companions, and that he explain everything that happened here. He recognized the spell but was still compelled to obey. His human form melted away into that of a Cambion demon (damn it, should’ve used my Divine Sense!) and he explained how he lured a team down here from Mirabar to help secure the Giant artifact we were after, then kill them.

As he spoke, he whistled for his pets. We heard terrible screams emanating from the chasm holes, and soon a rush of wings announced several bat-like demon creatures emerged. Jarys couldn’t harm us – but his demon buddies sure could!

The Screaming Devilkin and Imps were numerous, though not particularly strong, and the DM had some bad luck with attack rolls. I don’t think they got a single hit off. The Devilkin had an ongoing scream attack where we had to roll a DC 11 CON save every round or become incapacitated. That’s an easy save, though it is frequent. Only one of us succumbed to it, and only once, before we downed the last Screamer.

Our DM also found a loophole in my spell. Jarys couldn’t harm us, but he could still shoo us away. He cast Command on me, which I failed, forcing me to flee from him back across the chasm. 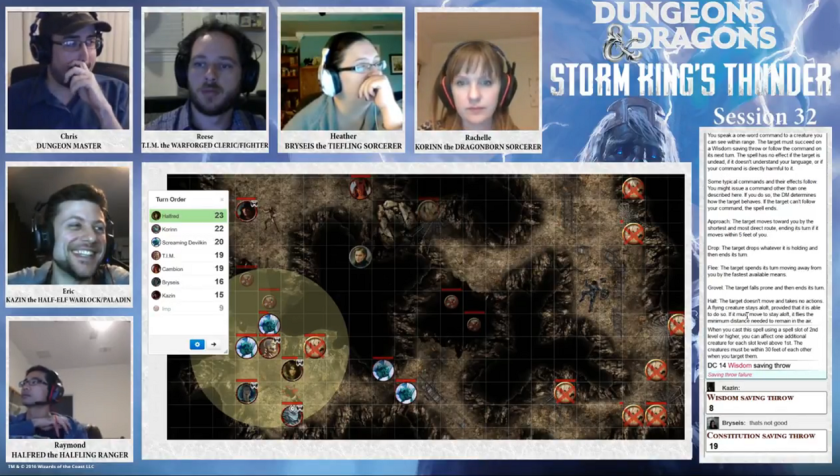 It took some time but with Jarys mostly locked down and the little guys not doing much we emerged victorious with nary a scratch. Jarys tried to flee back across the chasm, but T.I.M. tripped him as he ran. He fell, though his wings prevented him from splatting to the bottom.

What followed was a hilarious scene were we all saddled up to the edge and took potshots at him as he floated around helplessly, eventually killing him and sending him plunging to the bottom. Halfred flew down and recovered the Giant Relic, the Krig Rune, a banner that could grant courage and inspiration.

With the relic secured and our spellcasters completely drained we left the caves. Harshnag was waiting outside, with our captive warforged mage. We short rested and I used Detect Thoughts while T.I.M. interrogated this dark reflection of himself.

The warforged’s soul had been forcibly removed, making him little more than a thinking construct who obeyed his mistress’ orders without question. Unfortunately he knew little about his master’s plans, location, or even identity. We knew she was an ancient blue dragon but all I could see from the visions was a dark cloud of lightning, and armies marching across the desert.

This mistress had created the constructs, including T.I.M., and she desired his return. She also wanted Korinn, as apparently the blue dragonborn were supposed to either worship or obey her (or both), but Korinn hadn’t even heard of her, and we still don’t know her name.

The captive didn’t have any actionable intel for us. The mistress knew of our plans and we could expect to be harried at the other relic sites. After our discussion, T.I.M. beat the captive to death, releasing it from its sad, soulless existence.

We now have three relics, and Harshnag has one. According to his information, we need two more to gain access to the Temple of the All-Father to fix the Ordning. Harshnag knows of three more relic locations: Raven Rock, Great Worm Cavern, and One Stone.

Raven Rock is not too far to the North. The Great Worm Cavern is near our final destination at the All-Father Temple, while One Stone is back near Beorunna’s Well.

Our plan (well mine, but everyone seemed to agree) is to journey up to Raven Rock, then return to Mirabar. From there use the Harper circles to teleport to Everlund and grab our Hippogriffs. Then fly to the Great Worm Cavern. Harshnag mentioned that both it and the Temple of the All-Father were nigh-inaccessible on foot.

He liked this plan, and agreed to meet us at the Great Worm Cavern. We set off to Xantharl’s Keep, then up to Mirabar. We reached enough experience for level 8, so we’ll be leveling up then heading out to Raven Rock next time.