Embark on a series of high seas adventures in this collection of updated classic D&D adventure modules. 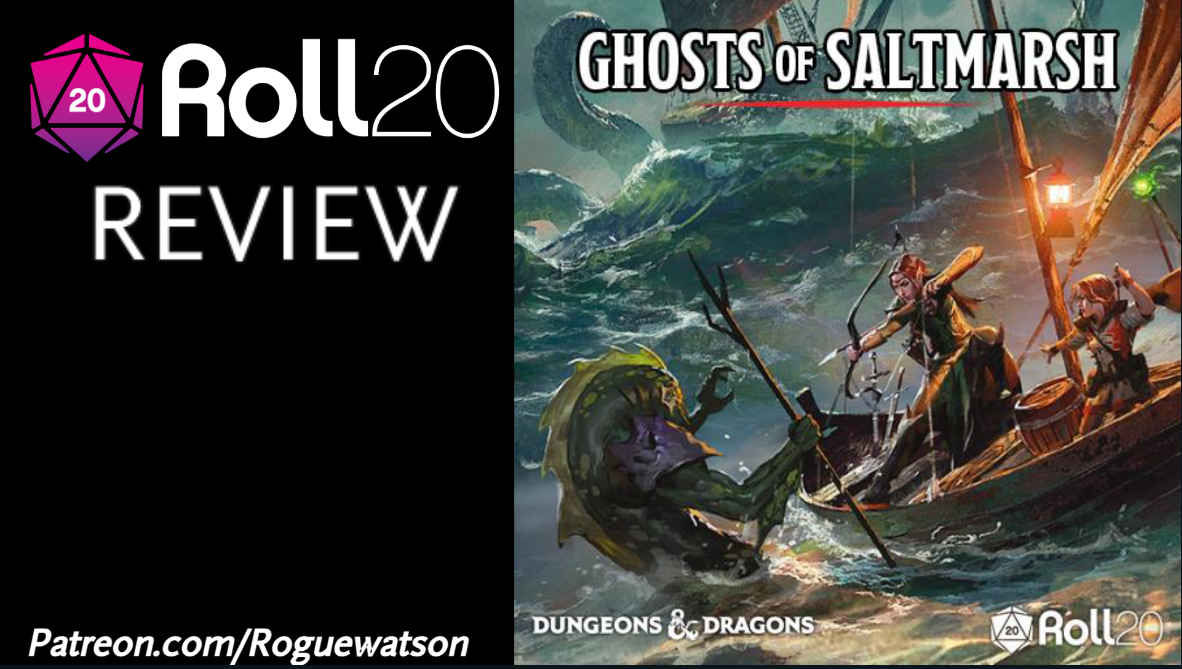 Ghosts of Saltmarsh is similar in concept to 2017’s Tales of the Yawning Portal, a collection of seven classic Dungeons & Dragons modules updated and converted to Fifth Edition. Instead of a dungeon-crawling theme, we’re on a boat!

The following content is included in the $49.99 Ghosts of Saltmarsh bundle.

*My review copy only included one of the seven bundled adventures, The Styes, so I was unable to break down the number and scale of the maps.

My review copy only included one of the seven included adventure modules in the full product, the highest level module, The Styes.

The Styes is designed for a party of 11th level PCs, and provides a fun, if brief example of a Lovecraftian setting. The PCs arrive in the titular fishing village to solve a series of murders – after the murderer has already been executed. It’s a fun hook as players delve into the Cult of Tharizdun and the aboleth that has taken a hold of the town, in order to feed dark energy into a juvenile kraken.

The third act gets truly bonkers as the players battle the aboleth, only to discover that it’s in the midst of fleeing from two more aboleth that have hunted it down for daring to conspire with a god and a kraken. The climactic battle involves a sunken room with two aboleth and a juvenile kraken, though smart PCs can deal with the aboleths diplomatically, providing a lot of really interesting opportunities.

While the story is delightful, the battle maps are a disappointment. I appreciate the watery background color used on all the maps but otherwise they completely lack color. The maps used in The Styes are small and basic, like a standard warehouse, and the aboleth lair is basically just one rectangular room.

I can’t speak to all the modules, but if they’re also less about dungeon crawling and more about smaller locations, then less detailed black and white maps may not be as big a negative. But for Roll20, I always prefer beautiful color maps regardless.

The adventure also includes lots of information on Saltmarsh, the hub town for the loosely-connected campaign. Saltmarsh is also given the one nice, richly detailed full color map of the bunch, similar in style to Phandalin or Port Nyanzaru. More maps like this, please!

Content wise the most impressive part of the adventure is the appendix. Appendix A includes extensive notes on different kinds of ships, including character sheets and multi-sided tokens for each one. It’s a brilliant solution when combining the PCs’ ship with random encounters on the sea, as well as quickly shuffling between levels.

The appendix also includes notes on ship combat, several tables for underwater encounters and environments, and three large underwater battlemaps filled with tokens, treasure, and traps, as well as multiple story hooks for different levels of groups. It’s an excellent addition that could be used for any side trek or underwater jaunt, with the only bummer being the colorless maps themselves.

From the content I had access to, I really enjoyed the Ghosts of Saltmarsh. The one adventure I looked at felt short but also memorable and fun, and the underwater locations provided some neat ideas that you could build effective side quests out of. And the ship tokens are an excellent solution to ship battle maps.

If the maps were better this would be a must-buy for any ship-based campaign. As it is I’d recommend researching the other included modules to make sure you’d want to run enough of them to warrant the purchase, as there’s currently no way to individually purchase them outside of the bundle.

The Verdict: “Ghosts of Saltmarsh” provides a wealth of adventures, locations, and ship rules for nautical themed campaigns.