I don’t really consider myself a big fan of any specific franchises or game developers. But if I had to pick a game developer to receive my feverish devotion, it would be Blizzard Entertainment.

I’ve been loving Blizzard’s games since before they were Blizzard, with 16-bit titles like The Lost Vikings and Rock ‘N Roll Racing. I fell in love with real-time strategy games in the 90s with Warcraft and Starcraft and Action-RPGs with Diablo and the rest is history.

So it means a lot when I say that we are at peak Blizzard awesomeness right now. A Blizzard game (or expansion) has appeared on my annual Game of the Year list for three of the last four years (and twice last year). Now with Overwatch, make that four out of five.

Overwatch is easily the most popular game on my list. The “hero shooter” blending of MOBA and FPS exploded this year. But leave it to Blizzard to once again take a genre and perfect it into an easily accessible, yet highly competitive format.

Overwatch uses a vibrant, intriguing world and equally amazing character designs. All of them could be housed within your favorite graphic novel or animated series. The fandom for this game is just incredible, as Blizzard gives some awesome character designs while only teasing the larger world around them with well-produced animated videos.

The team-based gameplay is all about countering enemy heroes and synchronizing various combinations. The fact that you can switch heroes any time during a match adds an amazing amount of flexibility and strategy. No matter what your FPS play style preference is, you’ll find at least a handful of heroes you enjoy playing, from Lucio the healing DJ to Roadhog the tanky grappler. It’s a brilliant design that’s brought a lot of players together, and Blizzard’s done a solid job with post-launch character and map additions and updates.

Unfortunately the one element where they dropped the ball are the loot boxes. I get that pretty much every modern game design needs to have a sense of progression; a way to level up or acquire new goodies. Overwatch rewards loot boxes after each new level, but the loot is mostly really lame.

Fancy new skins are nice, but exceedingly rare. Usually you’re getting voice lines, taunts, and sprays that you’ll forget about almost immediately. I stopped caring about opening loot boxes a while ago, and the increased experience requirements for later levels slows it way down.

Compare Overwatch’s system to Heroes of the Storm, another Blizzard multiplayer offering that my friends and I actually went back to after Overwatch. That’s right. In the end while we enjoyed Overwatch for a few months, it didn’t have near the staying power of my #2 Game of the Year of 2015.

In Heroes of the Storm you earn levels for each individual character, which awards skin and mount variations and gold rewards. Gold is also earned after each match, and you use gold to purchase new heroes and some skins. It’s a vastly more rewarding system. 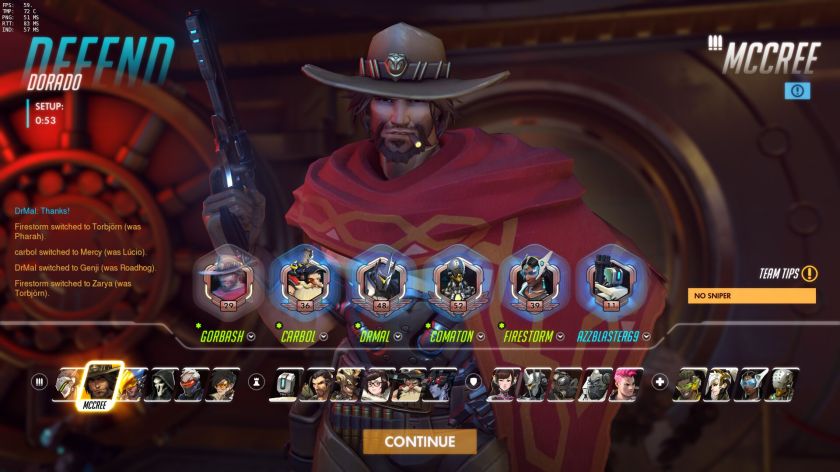 While I like that I have all the Overwatch heroes available from the start (you are paying full price after all), it leaves you with nothing fun to unlock other than the awesome skins – and good look ever getting more than a handful.

Complaints about loot system aside, Overwatch is still an incredible game. It takes all the best team-based shooting elements of Team Fortress 2 and multiple unique heroes of MOBAs into a complete and amazing package. I definitely plan on playing it off and on continuously for the foreseeable future.