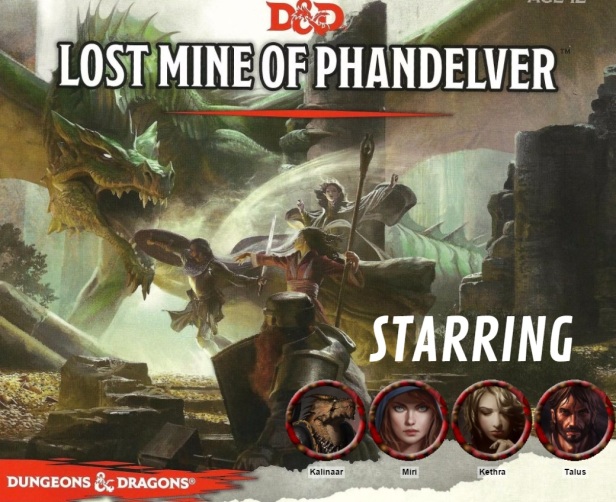 Three weeks. It took three weeks to get through our second ever dungeon, the Redbrand Hideout. Averaging about 2.5 hours per week means this campaign will end up taking several months to get through, which is far, far longer than the relatively bite-sized Shadowrun modules we were running previously.

It’s still a ton of fun, but I do find myself needing to gently remind my players of important events, characters, and information they they’d been given weeks ago. I created a pseudo-journal system and quest log within Roll20 to help alleviate this issue, and now how I just say “check your quests!” whenever my players wonder what just happened or what they need to be doing.

Anyway, on to the session! This week began right after the PCs dealt with the terrifying Nothic that had made its home in the middle of the dungeon. The PCs had several paths available and must’ve been feeling pretty confident after slaying the Nothic. They decided to split up and explore, which is always a terrible, terrible idea.

Using a map in Roll20 means showing your hand a bit in terms of the overall dungeon layout, so my players knew that there wasn’t much dungeon left. They scouted out to the West, with Talus rolling a fantastic Perception check to hear the bubbling sounds of alchemy supplies to the North and what sounded like a group of thugs playing a loud game in the middle room.

I pulled a bad DM move and misread what my players were doing, revealing the wrong damn room. It wasn’t too bad as the Perception check pretty much told them what was in there – though not to the exact extent when I revealed it. I was also confused as the players were attempting a very weird thing, splitting the party and opening two doors at once, the Northern and Southern door, while avoiding the noisy room in the middle.

Unfortunately for them the impatient rogue Kethra never actually listened at the Southern door before barging in, and she stumbled into a group of bugbears tormenting a goblin. She quickly closed the door and ran away. I actually had everyone roll initiative, but since Kethra won first and used the Dash action to high tail it back to the party, I dropped out of combat and gave my players some time prepare as the dungeon suddenly became aware of their presence.

Meanwhile I let the other PCs explore the Northern two rooms during the same time frame, including the rat-familiar, the alchemy supplies, tomes, and wizard’s bedroom. Kalinaar pushed some desks to create a natural tunnel in the alchemy workshop, and the hallway just outside soon became a massive battleground as the bugbears alerted the four Redbrands in the Common Room, and the PCs were suddenly faced with seven angry opponents.

This was by far the biggest and longest combat encounter we’d ever run. I still can’t believe my players had to end up fighting those final two rooms together, I thought they would be in a world of hurt.

But I constantly underestimate them, and the close quarters turned into a marked advantage for them. The Redbrands constantly tried to get past them and get into the fight, and at least twice the Paladin was able to use his reaction to cut them down – eliminating them when it wasn’t even his turn.

The bugbears proved more of a threat, especially their healthy leader Mosk who nearly killed Kalinaar in a single blow (the PCs are still level 2 at this point). Talus got off a critical sleep spell, taking two injured opponents out of the fight, while Miri flew out into the hallway and defended the Eastern side from reinforcements.

It was a fun, bloody battle that ended up far more in the players’ side than I would have predicted (I missed with my last half dozen attack rolls). It also took a solid hour to get through! Neither the bugbears nor Redbrands have any interesting abilities, so much of the fun and tactics had to do with maneuvering around the tight spaces, and gauging when to take reaction attacks. 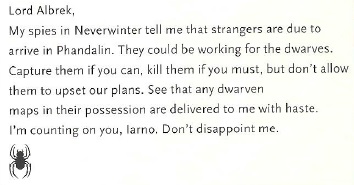 The session wasn’t completely devoid of story or role-playing. Talus had found a note addressed to Lord Albrek – the very wizard they were searching for – in the chamber of the supposed wizard leader of the Redbrands, Glasstaff. The plot thickens!

I also had the goblin Droop wake up and timidly approach the PCs (while they were dividing up the loot and coin), supplicating and yearning to serve them as his new masters. Most of them balked but Talus used some tough love pity on the creature, having him carry his quarterstaff as they left the dungeon for a much needed Long Rest back at the inn.

I thought we’d level up this session but by the time we left the dungeon it was nearly midnight, so we’re saving Level 3 for the beginning of next week. Next week will also present the first time the PCs really have some major choices on where to go and what to tackle next, as the world begins to open up around them. My players like really having direction, so I think the quest system used in “Lost Mine of Phandelver” will serve really well. We shall see!