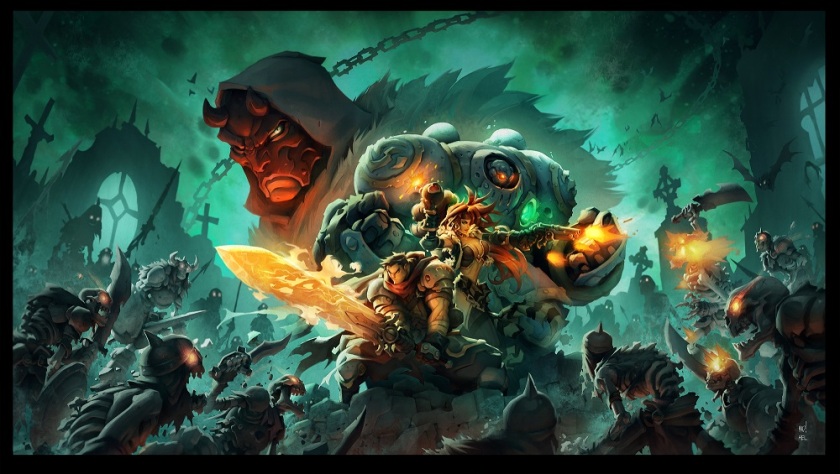 Most RPGs need to sell me on story, or combat, or setting, or preferably all of the above. Battle Chasers: Nightwar puts it’s exquisite art front and center, and it’s damn good. From the developers of Darksiders and the artwork from comic artist Joe Madureira come an impressive little indie RPG that offers a compelling turn-based combat system, fun characters, and a lengthy adventure.

Battle Chasers: Nightwar draws most of its gameplay from traditional 90s JRPGs. There’s a world map, turn-based combat, and dungeons to explore. Each of those elements takes advantage of modern gaming features.

Enemies are seen directly on screen. The world map holds treasures and a useful hub town. There’s a bestiary full of information and unlockable perks. Dungeons are randomized, replayable, include multiple difficulty settings, and are full of traps, treasures, secrets, side quests, and enemies. There’s a lot going on for an indie game originally funded via Kickstarter, but it all syncs up together nicely.

Combat shifts to a traditional turn-based battle. Basic attacks build up Overcharged mana, and often grant other effects like debuffing the enemy or placing shields on allies. Abilities take longer to get off but can be combined for some fantastic synergy. Battles are much more meaningful and deadly, and knowledge about status effects and enemy abilities is critical.

When the game first launched I hit a nasty difficulty spike about a third of the way through, forcing me to grind much more than I normally would have liked. Despite my annoyance I still enjoyed the gameplay immensely. The story is as basic as they come, but the characters are well-voiced, well-written, and enjoyable, from their banter during combat to the nice little vignettes that play out when sleeping at the inn.

Since releaseBattle Chasers: Nightwar has received some solid patches, and addressed many of those frustrating concerns. Considering this is Airship Syndicate’s first game, I’m very excited to see where the indie studio goes next. I highly recommend Battle Chasers: Nightwar to any fans of old school RPGs, and especially those who can appreciate really fun comic-style art and animations.

Read my review for PC Gamer!

Read my interview with Joe Madureira and Airship Syndicate (also for PC Gamer)!