Larian Studios have quietly been crafting RPG classics for years (and I’ve dabbled in a few), yet none really hit the big time until Divinity: Original Sin in 2014. It was my #1 Game of the Year that year. The sequel is better in every way, and it’s only a testament to how amazing #1 is this year that I’m slotting it here. But make no mistake, Divinity: Original Sin 2 is destined to be remembered as one of the best RPGs of its time.

By building upon the previous tactical turn-based RPG, Larian kept everything that worked with the original while making everything else better: rebalancing combat and skills, opening up multiplayer to four people, adding half a dozen core party members with Baldur’s Gate style storylines (entirely optional of course), adding multiple races (including lizardfolk and undead!), and even a full-blown map editor and Game Master mode for running your own D&D-style campaigns within the game engine.

With just a few tweaks and adjustments combat has been given an overhaul that feels both fresh and familiar. Everyone now has access to both Physical and Magical Armor, which work similarly to The Banner Saga; they’re additional hit points that must be worn down. Most importantly these armor types mean you can’t quite cheese the environmental effects like the first game, instead encouraging me to plan carefully, exploit weaknesses, and set up combos. 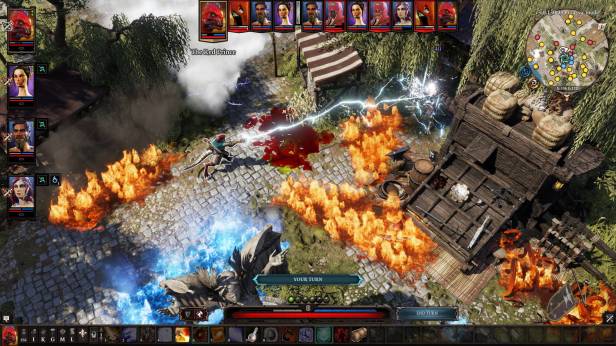 For example, I use Sebille (you can build anyone however you like, I made her a rogue) to backstab an opponent after wearing down their physical armor, using Adrenaline to apply Rupture Tendons, then following up with a Chicken Claw from putting points into the awesome new Polymorph skill.

The polymorphed chicken runs around taking bleeding damage. As it moves it triggers an Attack of Opportunity from The Red Prince, whom I’ve built as a two-handed warrior with some fire magic. He strikes the chicken as it squeaks by, triggering the Sparkstriker buff I cast previously, hitting a nearby opponent. That opponent happened to be standing in oil, applied by Fane, which is now ignited, courtesy of bleeding chicken.

If those two paragraphs split your face into a wide grin, we could probably be friends. I absolutely live for this kind of orchestrated chaos.

Divinity: Original Sin 2 rewards you for creativity and ingenuity. More than any other RPG it makes me feel like I’m actually playing Dungeons & Dragons. The writing remains as goofy and enjoyable as the first game while this time telling a much more compelling story, setting up big characters, villains, and situations right from the beginning. I backed Divinity 2 as quickly as possible on Kickstarter after my experience with the first game, and I could not be more satisfied with the results.