The season eight finale of The Walking Dead finally gives us the proper conclusion to the all our war with the Saviors that has dominated the plot for the last two years, including enough epilogues to give The Lord of the Rings: The Return of the King a run for its money.

As we knew from last week, Rick and company were heading into an ambush. Or, I suppose, a reverse ambush as engineered by Negan. He sends out a collection of his own people to sell the trap, which Dwight had dutifully delivered before he realized he was compromised.

Almost every one of our main force comes out to launch what they think is a decisive, war ending surprise attack. Negan sends several of his own people die to make it look good, and plants a map that leads our team right into an open field, where Negan hits them with the same ominous whistles that he used way back in the season six finale. 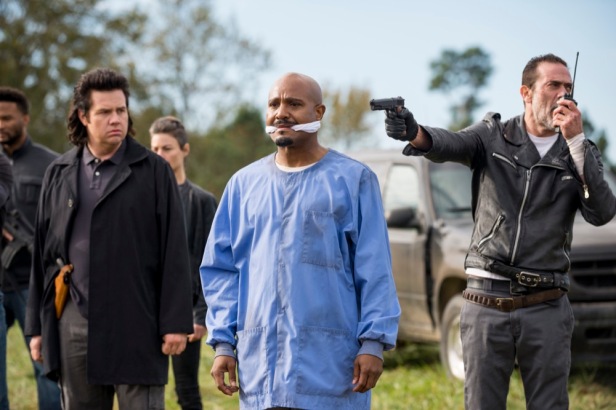 Negan starts a dramatic countdown while his forces crest a hill, guns drawn. Negan has his own gun on a whimpering Father Gabe, as the poor melancholic bastard had just previously tried to flee out of a moving car, only to receive admonishment from Eugene and a gut punch from Negan.

Eugene has a prominent role here. Not only has he delivered his custom ammo right on schedule, but he gets to ride shotgun with Negan, and stand right beside him. Seeing as how Dwight betrayed them and Simon had to be put down, Negan is a bit lacking in the middle-management department.

Eugene’s ultimate plan is soon revealed. The Saviors unload their guns, but instead of a massacre, the guns seemingly splinter and break in their hands, causing most of the Saviors to fall down in pain.

Our team doesn’t hesitate and immediately launches a counter-attack, pushing the surprised ambushers back.

Negan’s gun likewise misfires, and he knows just who to blame: Eugene. Eugene punches him in the head (wow!) while Dwight tackles him, causing the big man to flee the scene.

Meanwhile another group of Saviors attacks the Hilltop, which is now defended by Tara and, well, that’s basically it. Classic tactical maneuver – draw you enemy out and attack their newly defenseless headquarters.

The entire place is forced to evacuate, though Alden, our ever-helpful Savior prisoner with the patience of a saint, offers to stay behind with Tara to help slow them down.

They don’t even have to, thanks to the dramatic appearance of the women of Oceanside, who attack the Saviors leaving Hilltop with a barrage of explosives. We pretty much knew they were going to show up at some point, but having them sling a shit-ton of explosives was jarringly over dramatic.

Back at the ambush site Negan flees the scene, while Eugene is attacked by other Saviors (Regina, I think?). Rosita comes to his rescue, recognizing that the gun mishap was his handiwork.

While our team is busy winning the counter-attack, Rick pursues Negan, missing with his pistol but shattering a piece of an oddly placed stained glass window hanging from a tree. The two have yet another melee tussle and trade enough melodramatic philosophical creeds at each other to make any JRPG proud.

But Negan still has Lucille and gets the upper hand. He admits that he purposefully didn’t kill Rick during the season six finale because he didn’t want to kill a father in front of his kid – and now he regrets not killing Rick sooner. It’s my understanding that he already explained not killing Rick because he thought Rick would be a good leader and keep everyone in line under him, like Gregory. Which didn’t exactly work out either.

Rick seems to dip back into his wide-eyed, fearful state of the season seven premiere when he first met Negan, pleading for just ten seconds to tell Negan about Carl’s dreams of the future – a future where they work together instead of kill each other.

Because of Michonne reading Negan Carl’s letter last episode, Negan knows this isn’t total bullshit (I suppose he could believe Michonne had lied to him as well, but that doesn’t seem to be the case).

Rick delivers a decent little speech, echoing much of Carl’s letter, which at this point has been beaten over our heads several times. In the middle of the speech, just as Negan appears to be having a possible change of heart, Rick slices his throat with a piece of glass from the window.

At the same time the rest of the group runs up. The leader-less Saviors had surrendered completely. All that’s left is for Negan to die.

But, finally, Rick understands that he has to be better. They have to be better. He calls out for Siddiq to save the man’s life, and Maggie completely flips out. Though Jefferey Dean Morgan and Andrew Lincoln were providing a richly emotional exchange, it was Lauren Cohen as Maggie who delivered the emotional punch, screaming and crying for justice and vengeance for Glenn.

This whole scene stays centered on Rick, and he delivers yet another speech, this time to the whole group. The Saviors can go home. Those who want to join up and build something better can do so.

We look out and see a horde of zombies in the distance, the largest anyone’s ever seen. Nothing can rally a community together more than a shared external threat, and that’ s a pretty damn big one.

So Negan lives as Rick’s prisoner, just as in the comics. Though unlike in the comics, Negan doesn’t break the shit out of Rick’s leg during their fight. Rick and Michonne deliver the news to him as he convalesces back at Hilltop that he’ll be a prisoner for life, but also a symbol of the civilization they hope to build.

Maggie is less than thrilled. In a darkly lit, ominous scene we see her admitting to Jesus (who had more lines this episode than the entire back half of the season) that Rick was right about taking prisoners, and we see several times the one pretty boy Alden continuing to be a stalwart, brave, hardworking individual who wants to join the Hilltop community perfectly.

However, she’s super pissed about leaving Negan alive, and while she plans on working with Rick, she also plans on getting rid of Negan. Daryl voices his agreement, which begs the question: are we headed to a civil war between our heroes? Also why tell Jesus, whom I’m pretty sure is Lawful Good and would definitely be on Rick’s new merciful side when it comes to justice?

This episode also represented Morgan’s official departure from the show as he joins Fear the Walking Dead. As I’ve mentioned before, his character arc has been a confusing roller coaster of rage and insanity, but at least he knows he’s too crazy to live with them at this point.

It’s a sad, awkward end for the character. His last act is to visit Jaids (who reveals her real name is Anne?) and tell her she’s welcome to join their new community. “You should join up! Who, me? Nah I’m crazy. See ya!”

Given the long amount of epilogue sequences in the finale I’m even more convinced this would have been a fine stopping point for the entire series, particularly given the poignant, book-ended narration by Rick, as he dictates a reply note to Carl. We all hope for a better future, and after eight seasons I think the best future is for this once ground-breaking show about a zombie apocalypse to end as hopeful as it can get.

Eugene: Well damn. Here we are, Eugene in the Winners column. I’m a devout listener of The Talking Dead Podcast, and last week Chris absolutely nailed the twist – that Eugene’s near kidnapping actually motivated him to sabotage the Saviors’ ammo, and ultimately help win the war. The entire season spent a good chunk of time painting Eugene as a contemptible piece of shit, so I’m glad that Rosita’s first response, after saving his life, was to punch him square in the jaw.

Dwight: Dwight’s done bad stuff in the past, including tormenting Daryl and murdering Denise, yet he’s spent the latter half of season eight being helpful to our team and earnestly apologetic, contrite, and emotional about his actions. In the end Daryl drives him out to the woods and Dwight believes he’s about to be executed. But Daryl drops him the keys and tells him to leave. Dwight gets a happy ending, finding a note left behind from Sherry. It’s a sharp contrast from becoming the good-guy leader of the Saviors as in the comics, but it’s a happy ending nonetheless.

Rick: In the end Rick’s mercy prevails over his wrath. Knowing what happens with Negan in the comics made this twist obvious, but it was handled here well enough. I wish we had spent more time on the two men together, particularly the actual fight, which I’ll go into below…

The Final Fight: We’ve seen Rick and Negan hash it out physically countless times over the last two years, to the point of frustration. But now when all the chips are down I was expecting a knock-down, dragged out, brutal fight that would end with both men exhausted, broken, and bleeding. Instead we got a very weak, almost nonexistent battle that was over far too damn quickly, leaving the whole war feel anticlimactic.

Maggie: I was very much not a fan of Maggie’s seemingly dark turn at the end. She’s been the beacon of cautious yet prudent reasoning throughout this whole ordeal, and now when Rick seemingly coming back from the dark place he’s in, we have to put Maggie there? She should help Rick build the future, not plan a bloody insurrection based on revenge. Not a fan at all.

Morgan: I don’t like Morgan’s bizarre and sad turn toward straight-up dementia, and no one seems to really care about him anymore. Seeing Morgan’s teasing return at the end of season five only to have his storied tenure end like this is total crap.