Does the turn-based tactical combat of XCOM work in a 2D game?

It’s been far too long since I was able to properly start and finish an older game from my backlog. My workload as a freelance writer continues to increase (and part of my job is to play new games), and 2017 in particular had a bunch of long games that have taken up a big chunk of my personal play time, such as The Legend of Zelda: Breath of the Wild, Horizon Zero Dawn, and Divinity: Original Sin 2 (consequently, the #1-3 games on my Top Ten list).

But thanks to waiting in line every day to pick my daughter up from school, I’ve been slowly plugging away on my Nintendo 3DS, finishing a lot of recently released games like Pokémon Moon, Metroid: Samus Returns, and Monster Hunter Stories.

After those I fired up an older game that had been sitting in my digital library for so long that I accidentally purchased it again during a Steam sale at some point: SteamWorld Heist.

SteamWorld Heist is a spin-off of the SteamWorld Dig series that takes place in the same steampunk-robots-in-space universe. But instead of another action-platformerer, it’s freakin’ 2D XCOM, and it works brilliantly.

Like all good space stories, SteamWorld Heist stars a rag-tag crew of heroes on spaceship, assembled by Captain Piper. These are not randomized XCOM soldiers but more akin to slightly-fleshed out characters in an SRPG. It’s not exactly Fire Emblem but I appreciated being able to briefly chat with my crew members between battles.

In the beginning it’s just her and salty ex-whaling robot Seabrass, but over the course of the first of three zones we gather together a fun mix of characters, like Ivanski the dance-loving strong-bot, Sally Bolt the killer truck stop waitress, and Valentine the gentleman sniper.

Each character falls into one of six classes: Vanguard, Sentry, Flanker, Brawler, Bounty Hunter, and Captain. Characters gain experience and level up, gaining new passive traits and unlocking active abilities. The military bot Bea can fire two blasts if she didn’t move that turn, while the Captain can inspire those nearby, healing and providing a damage boost.

On top of that each character can only use two different kinds of weapons – the standard handgun, and a more advanced weapon, like heavy weapons, submachine guns, and laser-sighted uzis.

Knowing how to outfit each hero and how best to synergize their abilities are the key to success in the randomly generated tactical battles.

Piper and her crew fly to each new location on a space-based overland map. Before entering we choose our loadout of bots (usually three, but occasionally we get smaller or bigger maps) and outfit them with a weapon and up to two items. And a hat, because hats are awesome.

The game enters turn-based mode during these assaults, and it’s where we spend the majority of the gameplay. Basic movement and shooting rules are exactly like XCOM – move and shoot, or use your entire action to dash a bit farther. Like XCOM getting behind cover is crucial, but unlike XCOM, angling shots and ricocheting bullets is a major tactical part of the game, and a fun way to take advantage of the 2D playing field.

When I hit the shoot button, my selected character stands still and I can control the exact angle of my shot. This is where the laser-sighted guns come into play, as I can line up a beautifully executed ricochet to hit an enemy deep behind cover.

It’s still skill-based, as characters don’t have steady aim and I have to time it just right to hit the spot I want, but it’s far more satisfying than frustrating. I always tried to take at least one character who can wield a long-range, laser-sight weapon. 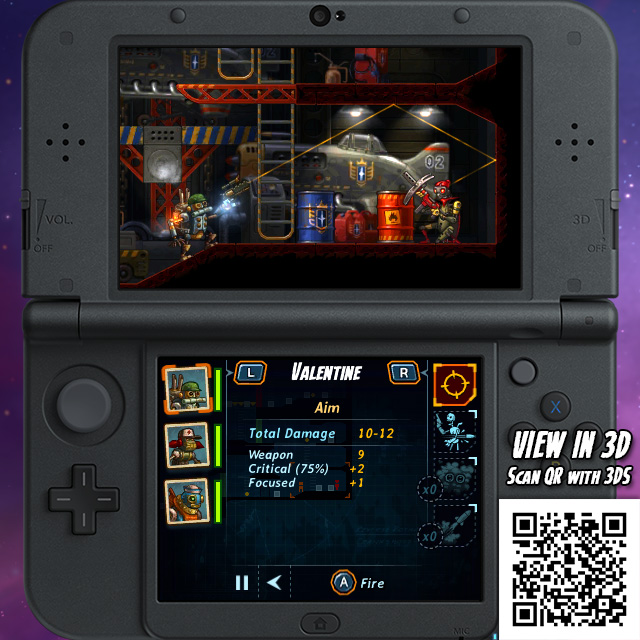 Each level is randomly generated, though there are some noticable limitations. We assault each enemy ship by opening doors to each room, activating the enemies inside. Jumping isn’t really a thing, though there is an item that can increase a character’s vertical range, and ladders frequently spawn in with platforms. I would’ve appreciated a bit more variety or interesting hazards, but instead each room is basically a collection of platforms, doors, and ladders.

The randomized design means that the few times I fail a mission (if a character goes down, they’re out for the rest of the fight), the subsequent layout could be drastically different. Usually this works out in my favor, as sometimes I just get unlucky with some brutal enemy placements, or I opened a door when I didn’t have everyone ready.

Aside from killing enemies, each level also contains several piles of loot. Loot either rewards water, the currency of the SteamWorld universe, or fancy new weapons and items.

There’s a nice variety of items each character can equip, from defensive armor to grenades to free-action pistols, but the same can’t be said of the weapons. After about halfway through the game I’d seen every type of weapon, and from there they simply get incrementally more powerful.

While the weapons failed to amaze, the characters and classes felt distinct enough to change up my strategy depending on who I took with me on a mission. I enjoyed combining Piper’s Inspire skill with a Sentry (Valentine or Bea), as they became stronger if they didn’t move. I could plant Piper and one of them together in a corner, and use a third character to flush out enemies.

This strategy fell apart soon after entering the third zone, where the challenge level ramped up significantly. Up till then I very rarely failed a mission, but the final area adds several new enemy types and concepts, such as floating orbs that shield nearby enemies from every attack, and large enemies who spawn flying bombs every round.

These new foes forced me to get out of my comfort zone and put my crew in riskier situations. It was a welcome challenge, particularly as the first zone is a complete cake-walk for those of us with dozens of hours of XCOM experience.

There is an actual story, and it does an admirable job giving my crew motivation for going into deep space and confronting a dangerous new threat. It’s more character-focused than plot-focused, which I think was the right way to handle it.

I was pleasantly surprised by SteamWorld Heist. The first SteamWorld Dig was a relatively simple, innocuous Metroidvania, but this sequel goes in a completely different gameplay direction. I wasn’t sure how well ‘2D XCOM‘ would work, but after playing I can confidently declare that it works wonderfully.