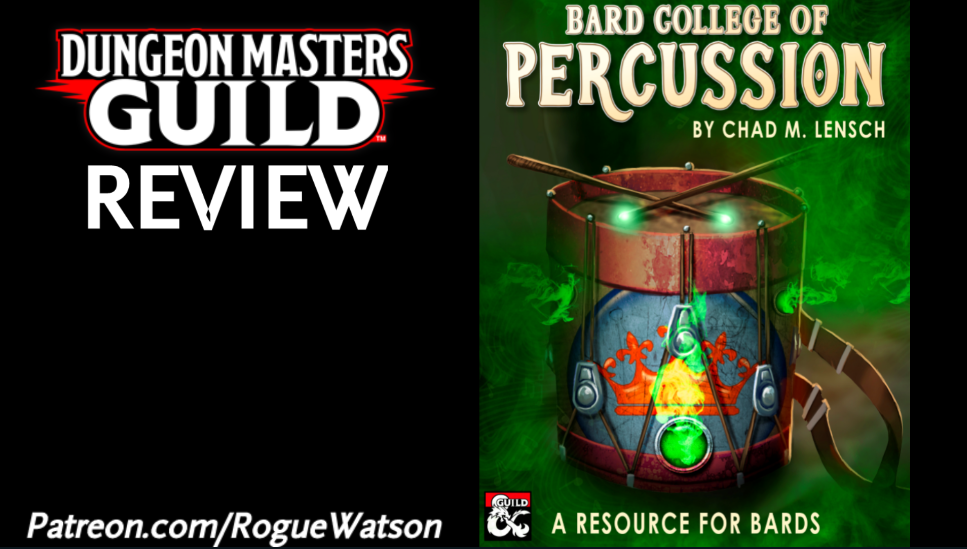 A review copy of “Bard College of Percussion” was provided by the publisher. Find more DMs Guild Reviews on my website and YouTube channel.

I was a band nerd throughout middle and high school, so I always have a soft spot for bards and bard-related stuff. My teenage years of marching band are paltry compared to Chad M. Lensch, designer of the Bard College of Percussion, and lifelong drummer and drumline teacher.

Lensch has channeled his passion into one of the most comprehensive and detailed player class supplements I’ve seen on the DMs Guild.

The Bard College of Percussion, as you may have guessed, is all about creating your own drummer – or cymbal crasher, or bongos player, or cowbell aficionado. What makes it impressive is the sheer amount of content: 30+ pages for a single concept that spans two new bard colleges, three backgrounds, a dozen magical instruments, three NPCs, and a mini-dungeon and story hook in the form of a troupe of Kobold drummers and engineers.

The two new Bard colleges divide percussionists into two different groups. Pitched-percussion bards (like the xylophone and temple blocks), specialize in healing and support, and use their Bardic Inspiration for Cleric-like effects like casting Healing Word and Calm Emotions. I like the idea of expending additional Bardic die the way a spellcaster would use higher spell slots.

The non-pitched percussion Bards (try saying that five times fast) are probably more what everyone pictures, and use drums, bongos, cymbals, and other rhythmic instruments to incite their allies (Bonus Action to move allies 10 feet) and strike fear in their enemies (AOE Frighten, up to CHA modifier). Both colleges feel well-balanced and highly thematic.

The new backgrounds are Street Musicians, Military Drummers, and Shamans, showcasing the wide variety of lifestyles and histories while still sharing a love of music. Each has a useful, mechanically sound Feature (such as performing once per day to a crowd to earn money) and tables for Personality Traits, Flaws, Bonds, and Ideals.

I was also particularly impressed with the magical instruments (again, soft spot for bards). They go well beyond the concept already provided in the Dungeon Masters Guide with instruments that provide spells (though there’s a few here as well).

Serawyn’s Treachery is a jeweled tabla that increases your CHA score, but has a sordid history that causes a revenant to follow you throughout your journeys like It Follows. The Mallets of Gruumsh double as +1 maces that can blind targets, and the Cymbals of the Lost Hero can be used as shields and thrown as weapons, Captain America style.

In case you don’t know what a “tabala” is, the supplement also provides 17 different percussive instruments drawn from real instruments from around the world that would fit in perfectly with a D&D setting. It’s an impressive bit of research (with pics!) that leads to more flavorful character customization beyond marching around with a snare drum.

As if all that wasn’t enough already, the Bard College of Percussion also features a new faction and mini-dungeon with the Cave of the Seekers of Kurtulmak. The Seekers are a funny group of kobold musicians and engineers living in a giant egg in a cave, which can spring into several different story ideas and hooks. It’s not a full-fledged adventure by any means, but we do get a little dungeon map and detailed notes on the faction and their musically-gifted leader.

With all of these detailed features utilizing a fun theme with a beautiful layout, it’s hard not to fall in love with Bard College of Percussion.

The Verdict: With multiple subclasses, backgrounds, magic items, NPCs, and even a mini-dungeon all working in concert with the theme, The Bard College of Percussion should be the Player Class Supplement by which all others are judged.

A review copy of “Bard College of Percussion” was provided by the publisher. Find more DMs Guild Reviews on my website and YouTube channel.

One thought on “DMs Guild Review – Bard College of Percussion”