Had I read Masque of the Red Death Player’s Guide before reviewing Red Jack, I would have had a much better understanding of Gothic Earth. The 100+ page rulebook effectively adapts D&D 5e’s rules into the late 19th century supernatural setting, providing new classes, archetypes, weapons and rules into an extremely well-produced and organized book.

Gothic Earth is spinoff of Ravenloft (a fantasy gothic setting) that’s set in an alternate Earth around the turn of the 20th century, in which magic exists but was corrupted by an evil force known as the Red Death, which created and summoned all matter of evil creatures like vampires and demons.

Masque of The Read Death Player’s Guide is named after the original box set release from the 90s, and updates all the rules and features for Dungeons & Dragons Fifth Edition. This massive rulebook is smartly organized along the same vein as the 5e Player’s Handbook, with chapters on classes, backgrounds, and equipment, as well as a chapter devoted for Dungeon Masters.

I’m extremely impressed by the guide’s organization and layout, beginning with the opening pages that smartly introduce the setting without getting bogged down in the milieu of building your own extravagant story and world (looking at you, Dungeon Master’s Guide!).

Not only does the first chapter break down character creation, it also focuses on the new rules and features that differ from D&D 5e, such as resolve points, healing and resting, managing stress and horror, ritual spell-casting, and the corrupting influence of Dark Powers.

Chapter one correctly assumes that everyone has at least passing knowledge of 5e, and immediately understand what makes Gothic Earth different and compelling. All the new mechanics are fun and thematic and given easy-to-read explanations, such as the difference between fear and horror (the former is mostly physical and temporary, the latter is more mental and long-lasting), and the interesting balance between letting every class cast spells, but at a potentially costly price thanks to the Dark Powers mechanic, which is further detailed in chapter seven.

Chapter two replaces all the 5e classes with five real-world facsimiles (no need for race rules, everyone’s human!). Most have obvious parallels with renamed and re-themed abilities; the sleuth is basically a rogue while the Shepherd is clearly a bard. But I did love the specialized feats that every class has access to, allowing players to create the same class while still making them wholly distinct.

Archetypes allow for further customization in chapter three. Unlike 5e’s subclasses, these archetypes have been divorced from classes, drawing more from 5e’s character backgrounds.

Any class can be a Criminal, Artifact Hunter, Outrider, or Spy, for example, and each archetype confers several levels of unique special features, such as the Outrider adding Ranger-like terrain advantages. It’s a system I already like much better than 5e’s otherwise lame backgrounds with their single feature that everyone forgets after level one. 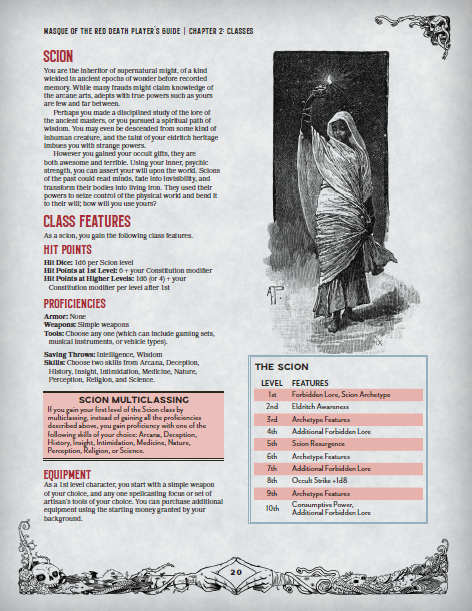 Actual backgrounds in Gothic Earth have been replaced by a character’s starting wealth and social standing, including granting a bigger bonus feature to those who choose to start with less money. Sidebars throughout the rulebook thoughtfully point out problematic areas when it comes to RPGs in general – but especially with a setting that’s rife with horror and mental anguish, as well as using real-world systems like poverty (no, being poor doesn’t normally grant you extra abilities).

The only element I found lacking in the player-based rules sections are magic items. Magic items get only a single tiny section in the Dungeon Master chapter, along with a sample item. I would’ve preferred at least a handful of sample items (the haunted organ we’re given is very cool) as magic items in this universe are very rare, unique, and often cursed.

The Dungeon Master chapter includes optional rules (such as feats), notes on emphasizing and rewaridng role-playing, different forms of madness, and the incredibly cool, multi-stage Dark Powers corruption, that could turn a power-hungry (or careless) PC into an awesome NPC villain!

As a final bonus, the rulebook also contains a five-page appendix on London as a potential adventure setting, including areas of interest and relevant history. There’s no question that Masque of the Red Death Player’s Guide succeeds as the preeminent resource for exploring the Gothic Earth campaign setting, providing everything a player and a DM needs, outside of an actual adventure.

The Verdict: A combination Player’s Handbook and Dungeon Master’s Guide, Masque of the Red Death Player’s Guide should be the primary resource for introducing and playing in the delightfully dark world of Gothic Earth.