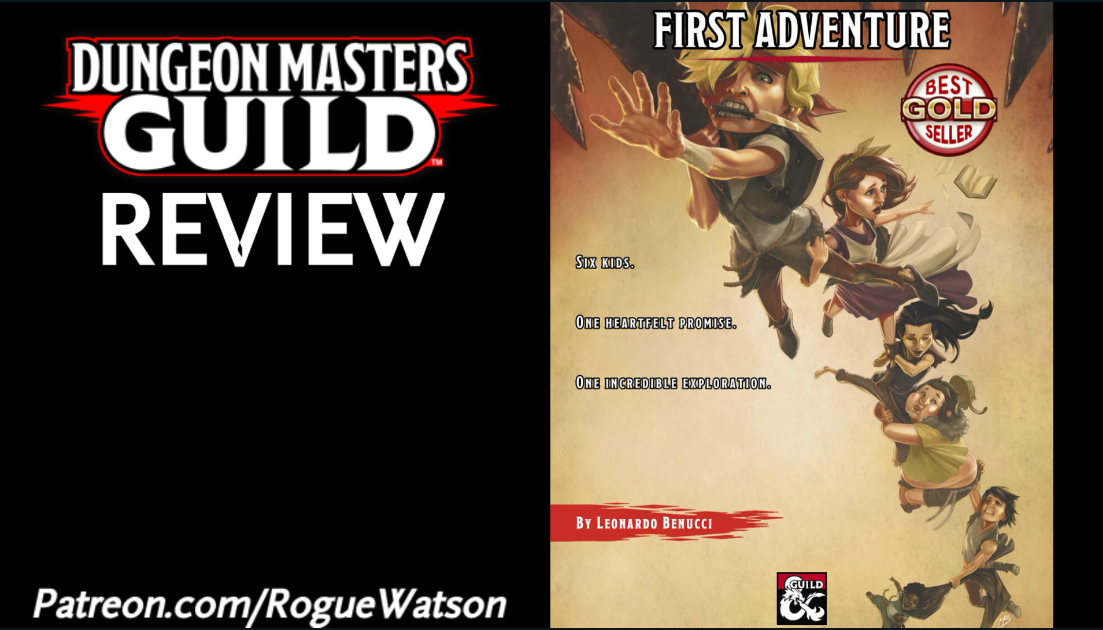 A review copy of “First Adventure“ was provided by the publisher. Find more DMs Guild Reviews on my website and YouTube channel.

The cover image of First Adventure is a fun rendition of the poster from The Goonies, a classic kid-centric adventure film from the 80s. Although the one-shot stars a pre-made group of plucky kid adventures, it actually borrows more from Stephen King’s It with an interesting mid-adventure time-skip to adulthood, and a terrifying monster that lurks below.

First Adventure is a narrative-focused one-shot that includes pre-made character sheets for six unique kid characters, and another six for their adult versions. The sheets are gorgeously illustrated and constructed, including first-person traits (“I write everything in my diary”) and a background written in second-person (“You love reading and studying,” etc).

Kid characters are physically weak, with a d4 for hit points, and weapons like stones and toy crossbows, but include fun kid traits like head-butting and the lucky feat. I love the idea of playing kid PCs in a more light-hearted adventure, but First Adventure boldly pulls the entire rug out from under you once you reach the end of the dungeon.

The orphan kids are tasked with finding a flower from the Feywild to honor their late caretaker’s wishes. The entrance can be found deep in a mine every 17 years when the veil between worlds is thinnest. The dungeon is linear and mostly danger-free, relying more on setting the mood and exploring the area, including a possible mine cart ride down to the bottom.

The area between worlds happens to run through the nest of an ornery owlbear, however. The entire tone rapidly changes as this owlbear absolutely doesn’t fuck around, going so far as to murder some of the kid-PCs before the others retreat.

Let me repeat that: the goal at the end is to run the hell out of the dungeon and declare the mission a failure. As DM you’re supposed to allow this to linger a bit, then surprise the players with a second half twist: 17 years later the now grown-up adventurers gather together to try again.

It’s a crazy moment that I can’t imagine pulling off successfully. The players get their new and improved character sheets, now adults at level five in their obvious professions (the kid who heard voices and randomly conjured magic becomes a Wild Magic Sorcerer, for example), and delve back into the mine.

There’s nothing there this time, and after solving a quick puzzle, they arrive in the feywild and engage with a complex social situation with a group of faeries. The five faeries all have different personalities, and require the players to entertain them, no skill check needed. From there the faeries simply hand over the flower, the players return to the mine, fight the recently returned owlbear, and it’s mission complete.

I found the adult second half wholly unsatisfying compared to the first. The time-skip is a big deal but there’s no real reason for it. There are hardly any skill checks or combat. Even the final fight against the souped-up, spell-casting, winged owlbear isn’t meant to be a straight-up fight (and would get its butt kicked by 4-6 fully rested level five PCs anyway). The party should notice a thorn in its leg, and by removing the leg, cures the beast of its cursed existence.

I don’t usually complain about an adventure having too much story and not enough dice-rolling, but First Adventure almost feels more suited as a short-story rather than an RPG. I wish the first half with the kids had been expanded into its own adventure, with a special end-game time-skip for a final boss fight.

The story does feature a surprise twist-ending ripped straight out of Carrie (or any horror movie): when the players place the flower on their caretaker’s grave, she rises as a lich, her ritual complete! That’s a legitimately awesome twist but also a huge tonal shift from the rest of the story, and the one-shot simply ends right then and there.

Though the descriptive text is way too wordy (the read-aloud for the prologue is over a page long!), the overall presentation is phenomenal, with immersive full-page artwork as player handouts, as well as full color grid battle maps and the excellent character sheets.

I love the idea of taking well-worn, classic story ideas from pop culture and using them as a springboard for RPG adventures, but First Adventure tries to cram too many different ideas and concepts into too small a frame.

The Verdict: First Adventure draws heavily from classic kid-centric adventure and horror films to its benefit, but loses its momentum in the second half.

A review copy of “First Adventure“ was provided by the publisher. Find more DMs Guild Reviews on my website and YouTube channel.