Despite some frustrations, Hand of Fate successfully layers in 3rd person combat into a highly randomized card-based tabletop adventure.

The indie gaming scene is full of brilliant, innovative ideas and genre mashups. Many of them bury a cool concept deep within convoluted gameplay or “retro-homage” graphics. Final execution is just as critical as having a cool idea, and so many games fail – or are quietly forgotten because of it.

Thankfully Hand of Fate is not one of those games. By layering a 3rd person arena-fighting game on top of a card-based tabletop adventure, Hand of Fate creates a truly unique and infinitely replayable experience.

Hand of Fate‘s gameplay concepts are so intriguing and interesting that they’re actually tricky to describe. You play as a nameless warrior seated at a mystical card table. A robed wizard known only as The Dealer plays a game by dealing out cards, both from his deck and yours. Your deck is full of treasures and loot, while his is a mixture of battles, choice-driven encounters, merchants, and resources.

Every turn you expend one unit of food to move around a board of randomly placed cards. The cards are face-down, so you don’t know what any one card will bring you. Some of them are simple combat encounters, while others present a little narrative with a choice at the end. Most cards offer (or force) a game of chance, where you have to pick the right card as they’re shuffled before your eyes. Success brings treasures and rewards, while Failure drains your resources and health.

The first time you complete a card, whether it’s a combat encounter or picking the right choices and Successes, you acquire the card’s token. At the end of your run, which ends in either success or death, all tokens are opened to reveal new cards that can be added to both your deck and The Dealer’s. Before beginning each level, you can build up both your equipment deck and The Dealer’s encounter deck, letting you customize and tailor which cards you’ll see – though actually seeing them is still randomized.

Combat begins whenever The Dealer draws from the Monster deck, which are appropriately themed – like the 4 of Skulls or 6 of Plague. The action shifts to a 3rd person perspective as the equipment cards you’ve acquired fly into the screen and onto your character. Monsters are likewise summoned from their cards. It’s a really cool effect and brings home the card-based theme of the entire world.

The action utilizes the tried and true combo and counter system of the Batman: Arkham games, and just about every other 3rd person action brawler. It’s not particularly engaging until you acquire some weapons and artifacts with activated abilities. Since enemies are highly randomized, the foes you face can range anywhere from a small group of easy bandits, to an extremely trying and prolonged fight with a dozen ratmen and maybe even a recycled boss or two.

Each dungeon floor is made up of half a dozen cards or so, with a Stairs card (or equivalent) that leads to the next floor. Completing about four of these leads to a tough boss fight, such as the Queen of Dust or Jack of Scales. Each boss has their own unique fighting styles and abilities, as well as an overall Curse that affects you throughout their dungeon, such as slowing you down or causing you to lose food). 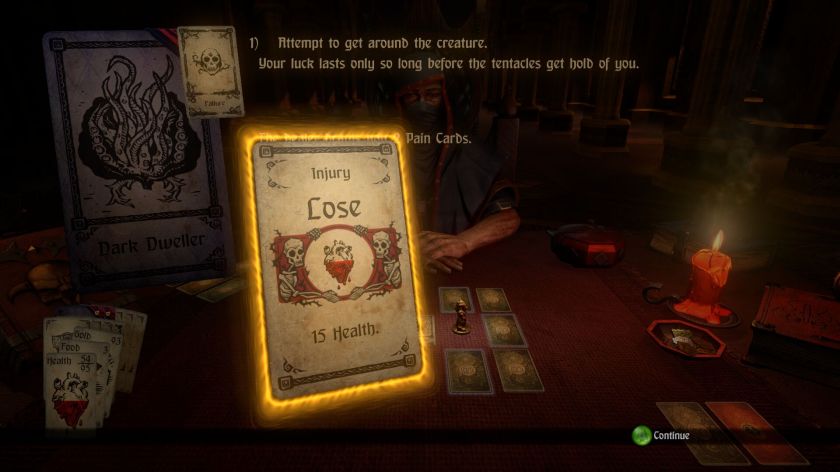 The Story Mode consists of 12 such bosses. After a set of three, everyone gets an upgrade, which brings me to my first complaint – an unfortunate lack of enemy variety. There are Bandits, Ratmen, Skeletons, and Lizardmen. Those four act as your primary adversaries through the 10 or so hours it takes to complete the Main Story, with the occasional addition of some annoying mages and cool lava golems.

Each boss is also just a bigger version of those four enemy groupings. It’s a shame that the difficulty mainly comes to “make everyone stronger” rather than presenting new and interesting threats, and it’s one area where the game’s indie development is definitely noticeable.

My other chief complaint is that the final boss fight is a complete bear. After defeating the 12 bosses you then have one final run against The Dealer himself. The Dealer prevents you form ever acquiring Blessings (very powerful passive buffs) while saddling you with a debilitating, sometimes crippling curses after each level. All that is fine, but it’s the actual final fight that I found horrid.

It’s constructed like an awkward, old-school boss fight, with The Dealer as this giant figure in the background. He summons all the previous bosses, three at a time. You have to then fight all 12 bosses with a single bar of health. In the case of the three fast, deadly ratmen I nearly punched my monitor several times. Even worse, after each set you have to dodge some annoying light platfforming traps with a fixed camera angle and a system that doesn’t respond very well to precise controls. EVEN WORSE is a ridiculous Quick Time Event in order to actually stun and damage The Dealer between rounds.

It’s one thing to craft a difficult final challenge, but here you’re simply fighting all the bosses over again, with some added frustrating mechanics. It’s an excellent example of how not to make a final challenge. 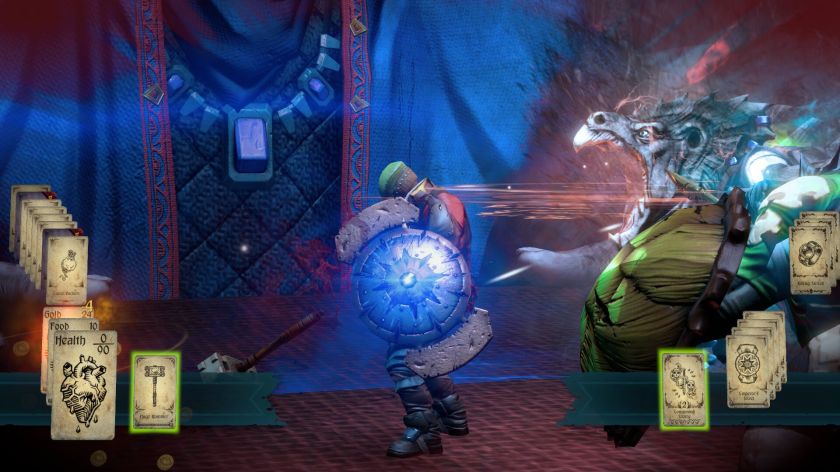 I tried half a dozen times before finally lowering the difficulty – keep in mind each run takes a good 30 minutes, so we’re talking hours of playtime. Even then it took me another three tries, and I was only able to persevere after succeeding on a rare card that gave me double my max health. About a third of my total playtime was spent on that last dungeon and boss. Like Retro City Rampage, the frustrating final boss fight threatened to destroy my otherwise positive experience.

Story Mode doesn’t really tell a story. You still never learn just what these characters are doing, or who you or The Dealer are. And yet, The Dealer’s dialogue and voice acting are so superb I never really cared. Every single turn he’s taunting you, commenting on card choices and teasing future successes or failures. It’s a nice feature since you’re staring at him throughout the majority of the game.

Endless Mode becomes a never-ending rogue-like as you continue to unlock new cards and get deeper into the card-based levels. Given that I only unlocked about half the cards during my 10 hour Main Story campaign, there’s definitely a lot of game to be had if you really want do dig in. I didn’t find the combat to be quite fun enough, nor the enemies to be quite interesting enough to stick around much after completing the Story Mode. It’s safe to say my frustration at the final boss fight was probably a factor.

Despite all this Hand of Fate is a really cool game. The card themes are fully embraced, from random draws to chance cards to the way they fly off and build up you and the monsters. There’s enough cool loot and varied encounters that make every run unique, even with the repeated enemies. Acquiring tokens and unlocking new cards is also a great hook, letting you build up your collection despite permadeath. Hand of Fate successfully adds some very video game-y gameplay concepts and features to an intriguing tabletop card game formula.