A review copy of Destiny Abroad: The Voyage of the Rose Marie was provided for the purposes of this review.

If you can’t already tell by the title, “The Voyage of the Rose Marie” is a ship-based adventure that takes place during a lengthy sea voyage. It’s designed for brand new level 1 PCs, and at 11 pages you should be able to finish it within a single session. It features a heavily scripted mix of role-playing, combat, and skill checks, and even a major choice for the party to make at the end.

Apparently there is a whole “Destiny Abroad” series planned, though this adventure can easily be played as a stand-alone, as well as incorporated into any campaign or world that features sailing ships.

The first page serves as notes for new DMs and some light background information on the ship and why the PCs are there. I would have liked to see a summarized rundown of the ship size, crew number, and important NPC names.

The first scene is basically a giant rat fight, which has long been made fun of as the typical cliché newbie situation to throw at level 1 players. In this case the ship’s quatermaster Eran approaches the players, tells them to take care of the rat problem, and basically shoves them into the hold. There are a few notes on Eran and how to roleplay him, and even a little stat block.

The rats provide a pretty standard fight with three giant rats, though we’re given some options on whether the rats drop in for a surprise round or whether the PCs can discover them, depending on how challenging we want to make the fight.

Afterward the party is supposed to know to dispose of the rat bodies. I know my players wouldn’t even think about it, they would wipe their hands, say ‘job well done,’ and return to Eran. So I’d recommend that Eran specifically tell them they need to dispose of the bodies, and/or to investigate where the rats came from or what damage has been done. The goal is to get the PCs a bit deeper inside the hold where they meet the prisoners. 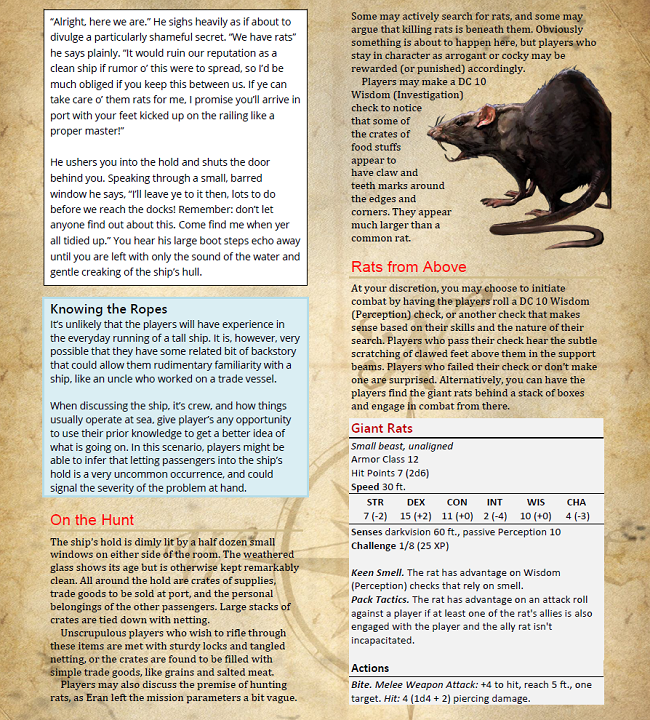 Two crew mates are being held captive in the ship’s brig, Tammer and Slick. There are a lot of fun role-playing notes on these two. Slick is confident and jittery while Tammer is more brutish. Both of them are in here for insubordination. The goal here is just to talk to them and learn about the near-mutiny inspired by first mate Jeras.

After meeting these two, disposing of the rats, and returning to Eran, the PCs will witness an altercation between the captain and Jeras. The two are arguing, and Jeras storms out. This is another role-playing only scene where the players can talk to the captain, but he downplays the argument. My worry here is that the PCs might feel they’re not really doing anything, but instead just reacting to a series of heavily scripted scenes. Hopefully the PCs engage in these scenes and fun with them.

The next scene features a storm on the seas, which boils down to a skill check. The adventure encourages players to get creative with how they survive the storm, such as lashing themselves via ropes or hunkering down in the hold. There’s a few examples with DC checks given, with failure resulting in some damage, as well as notes for spicing things up with a crewmate who may need rescuing.

During the storm (or I guess right when it calms down) Jeras makes his move, freeing the prisoners and trying to take over the boat. Mutiny!

The PCs will have to deal with Slick and Tammer, which should be fun since they’ve already met them earlier. It can be played as straight combat but clever PCs can also get them to fight each other or at least argue using Insight and CHA skills checks.

I like that there are specific notes throughout that point out these outside-the-box features that makes D&D so much fun, and something that newer players and DMs might not otherwise engage with.

The climax occurs when the player’s make it to the main deck and find the captain held hostage by Jeras. It’s here the PCs can make a choice and determine which team to side with, and which to fight.

Obviously Jeras is the logical target for a heroic adventure but it’s up to the players, and both sides will reward them. There isn’t a lot of information on Jeras or his motivations other than generic disgruntlement. I feel like an earlier scene between the PCs and Jeras, so he could explain his point of view, would have made this choice much more compelling and interesting. Instead it becomes a clear-cut good guy-bad guy situation.

Since our PCs are level 1, the battle is between the appropriate leader and two crew mates. The crew mate stat blocks are basically bandits from the Monster Manual while the leader (only Jeras stat block is given but I assume the captain has the same stats) looks like a cross between a noble and a bandit captain.

The end obviously differs depending on the choice the PCs made, but either way they are rewarded with money and safe passage off the ship and onto their destination. The adventure continues in Part Two of “Destiny Abroad,” which I guess is still forthcoming, but “The Voyage of Rose Marie” certainly works as either a self-contained adventure, or a one-shot in your own campaign whenever the PCs are on a ship, and you want to spice things up with a good old fashioned mutiny.

The Verdict: A short and simple ship-based adventure featuring a fun little mutiny for level 1 Pcs, though lacking in any maps or portraits.

A review copy of Destiny Abroad: The Voyage of the Rose Marie was provided for the purposes of this review.

2 thoughts on “DMs Guild Review: Destiny Abroad: The Voyage of the Rose Marie”