Shape the future of Neverwinter’s politics in this short but packed urban adventure for 3rd level. 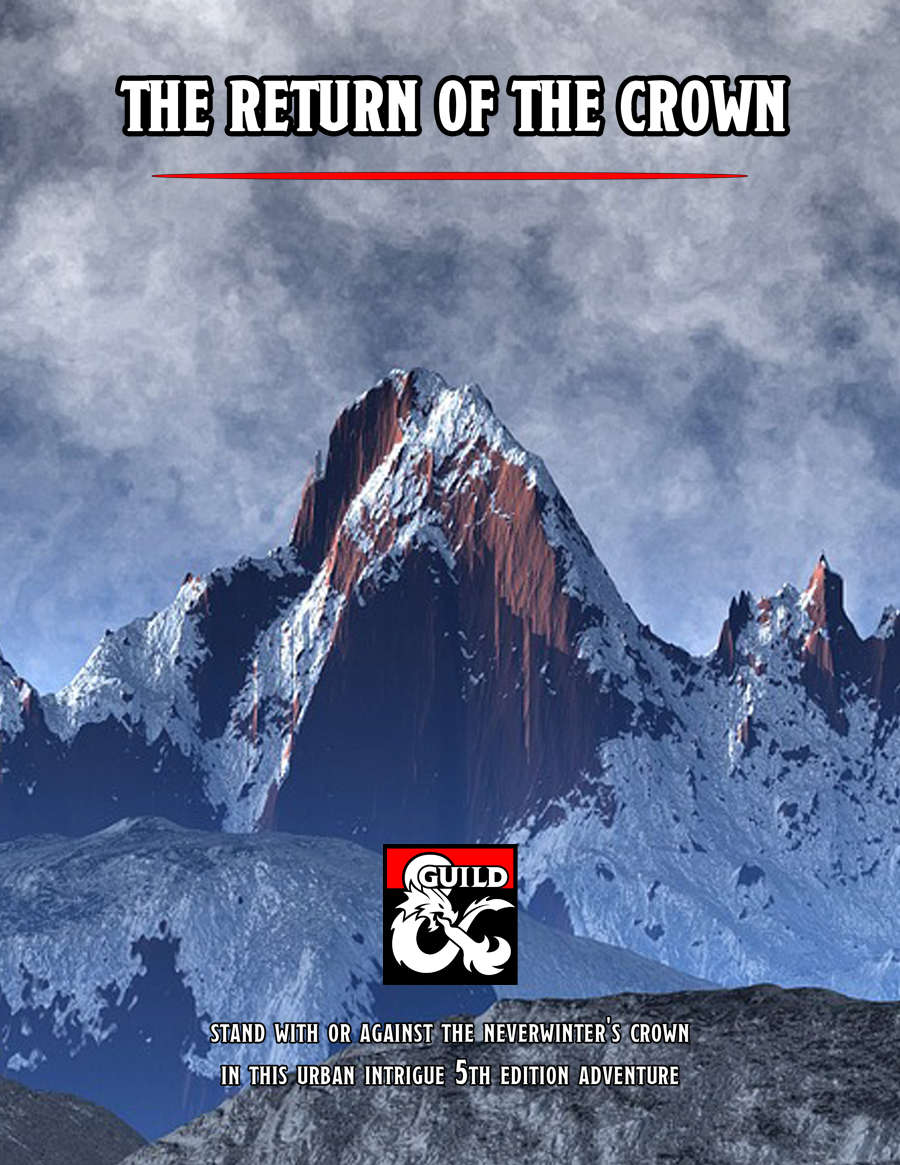 A review copy of “The Return of the Crown” was provided by the publisher. Find more DMs Guild Reviews on my website and YouTube channel.

Published by: The Dragon’s Tooth Inn

“The Return of the Crown” is an urban adventure designed for a 3rd level party that takes place entirely within the city of Neverwinter. Though it’s in desperate need of an editor, the adventure provides a solid mix of dungeon crawling, social dialogue, and fact-finding as you follow the trail that begins with an explosion and ends with the political future of the city.

The 16-page adventure (plus monster appendix) is divided into five parts. The story begins with our heroes guarding a warehouse in the city, when an explosion draws them into a nearby gang hideout, the Dead Rats.

This is a pretty standard gang lair, featuring a central common area full of gang members, including several wererats. Dungeon maps are provided but they’re DM-only and feature only plain, black and white graph paper design. Functional but not attractive.

From there the PCs learn about a wider plot from a rebellious faction within the city, called The Nashers, who have uncovered the true heir to the Neverwinter throne. In Part 3 the city opens up a bit to allow the PCs to explore and learn about The Nashers and the history of the city and its royal family. Unfortunately only a few locations are listed, most are dead ends, and no maps or artwork are provided.

The one place that does pick up the trail is the Central Library, where the PCs can explore the hidden Old Library section that has since been sealed off. They’ll have to fight through some guardian undead and a possible Book Golem to gain the location of the Nasher’s headquarters, where they can meet with the resistance. At the end of the adventure the players can choose which faction they want to support, though the design seems to lean heavily toward supporting the Nashers and the newly discovered heir. There’s some interesting gray areas that could be explored here, as the heir has no political experience or any real knowledge of the city and would be little more than a puppet, even if he is the rightful heir.

The climatic final act diverges wildly depending on the final choice the players make. If they continue to support Lord Dagult, they’ll have to help defend him and his forces as they travel from the city to the temple against the rebels. But if they decide to support the rebels, they’ll get to do so nonviolently in an intriguing courtroom drama, where the PCs can make a series of skill checks and role-playing flourishes to state their case before the Lord’s Alliance. Guess which path I find vastly more interesting!

I’m impressed by how much is crammed in such a little space, including multiple mini-dungeon crawls. Unfortunately the whole adventure is laden with blatant grammatical errors, awkward sentence structure, and generally poor or non-existent editing, which I find inexcusable for a DMs Guild product. It’s a nasty stain on an otherwise solid urban adventure.

The Verdict: “The REturn of the Crown” is hampered by poor editing but does effectively squeeze a politically interesting urban adventure based on real Forgotten Realms lore in a little over a dozen pages.

A review copy of “The Return of the Crown” was provided by the publisher. Find more DMs Guild Reviews on my website and YouTube channel.