The first episode of AL Season 9, following the Descent Into Avernus storyline. 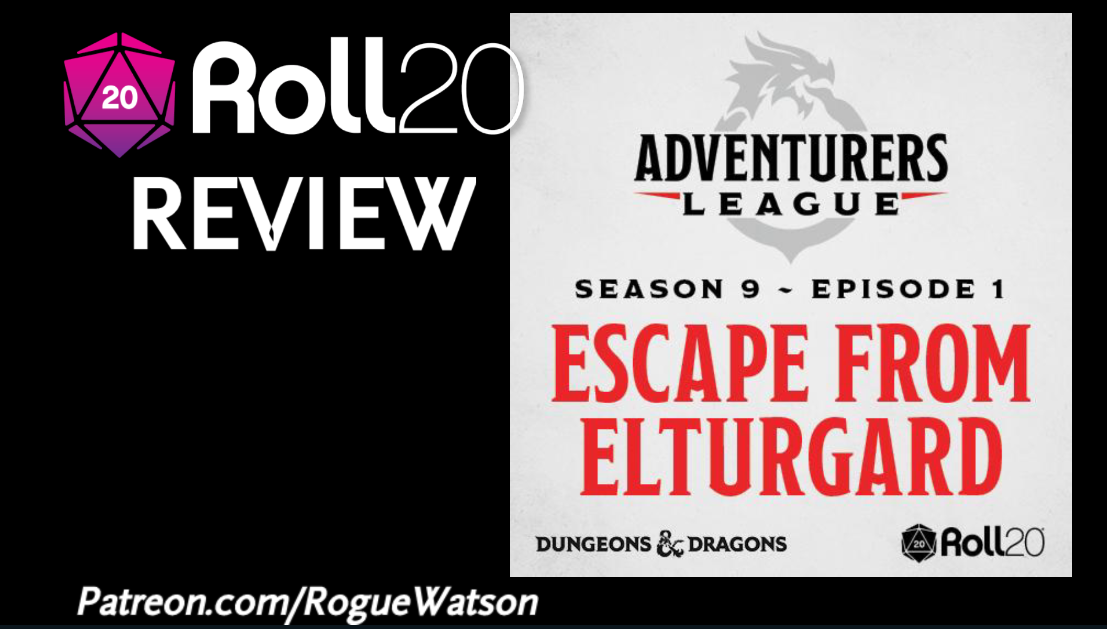 Wizards of the Coast has been producing Adventures League modules for years, but Season Nine is the first to be adapted for Roll20. The first episode, “Escape from Elturgard,” creates a personable and satisfying introduction to the Descent Into Avernus storyline.

The following content is included in D&D Adventurer’s League Season 9 – 01 – Escape from Elturgard ($4.99) Adventurer’s League modules are designed as self-contained, one-shot stories within a greater narrative arc. In other words, an episodic campaign. In this first episode, the party witnesses the city of Elturel disappear into the depths of hell from the nearby outskirts. It’s up to our heroes to help organize the refugee caravan that’s headed to Baldur’s Gate.

The adventure is divided into four parts, and the party can tackle parts one through three in any order. Their task is to gather various citizens and help them with predicaments befitting level 1-2 PCs, such as bandits and cultists taking over a nearby shop in part one.

Part two is a bit lame, with a poet requiring three different items for his journal. I know these are very low level PCs, but a freaking city just disappeared nearby, do we really need to gather ink and feathers for this guy? A fetch quest within a fetch quest isn’t  exactly compelling, and it boils down to a few skill checks, challenges, and a random pegasus. 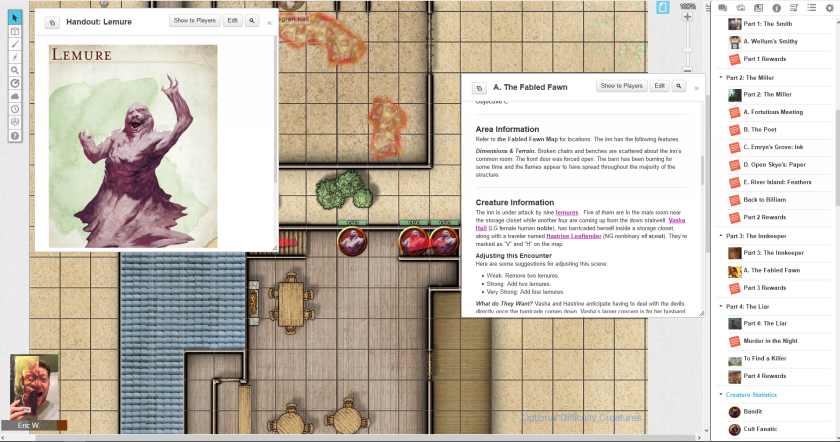 Thankfully parts three and four are simply amazing. In part three, the innkeeper is under siege by some demons (lemures), while her husband has been knocked unconscious in a nearby barn, which is currently on fire. It’s a challenging and dynamic situation as the party will probably have to divide their forces between combat and skill checks to save them both.

Once everyone has been gathered, the caravan sets out in part four. Instead of ending there however, there’s one more complication, and it’s a great one – a mini-murder mystery unfolds as one of the NPCs murders another in the dead of night. Turns out the murderer is a demon cultist in disguise, and the party will need to perform some proper investigation, including socializing and skill checks, to root her out.

“Escape from Elturgard” translates very well to Roll20 thanks to some lovely maps and fantastic token art for all of the dozen named NPCs the party interacts with. I would’ve loved to have a caravan map for part four, but at least we get maps for the two primary combat scenarios in parts one and three. Not only does this episode make for a solid Tier 1 AL one-shot, but it also serves as a superior introduction to the bigger story in Descent Into Avernus.

The Verdict: Quality maps, plenty of handouts, and multiple heroic opportunities make “Escape from Elturgard” a fantastic introduction to the Avernus storyline.