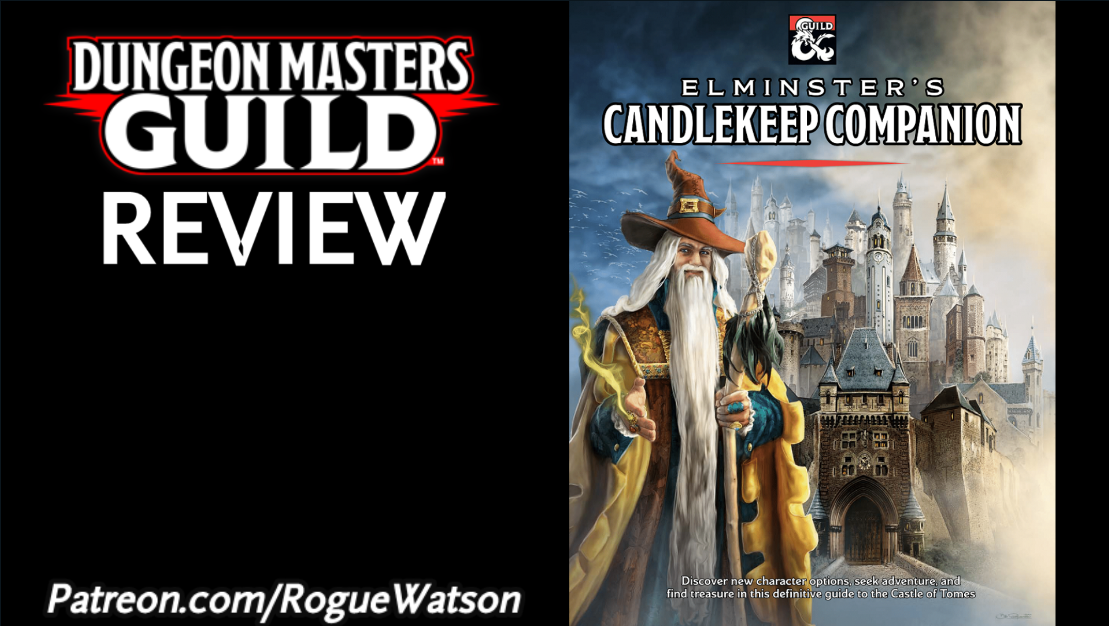 My knowledge of Candlekeep begins and ends with Baldur’s Gate, a video game RPG that I partially played over 20 years ago. The events of that game are neatly included in the Brief History of Candlekeep section, which provides a succinct overview of major events that have befallen the ancient library. The prologue also features a helpful list of Five Things to Know about Candlekeep, including the interesting entrance fee that requires a donation of a piece of knowledge.

The prologue, and the entire guidebook, includes lots of information written in an easily digestible format, with well-organized subheadings and a keen focus on what’s important.

The nearly 100-page guidebook is organized into six chapters, with a professional layout that mimics the published 5E books, and stunning artwork throughout each chapter. The premiere piece of art is a stunning full-page, full-color,  top-down picture of Candlekeep, with annotated locations.

Chapter one provides new character options in the form of four new subclasses for Bard, Cleric, Monk, and Wizard. Each subclass uses the themes of knowledge and forethought in interesting ways. When gaining a Bardic Inspiration from the Bard College of Destiny, the user can roll the die right away and decide when to use it – like the Portent Die from the Wizard School of Divination. The Cleric Prophecy Domain has a similar concept with their Channel Divinity, using a Religion or Insight skill check to replace a roll.

Chapters two and three detail different aspects of Candlekeep, including a breakdown of locations, details on the Avowed Monks, library security measures, and how to spend downtime in Candlekeep to gain new abilities.

Over 20 sample books are given via a d100 table, with fun nods to metaknowledge. For example, intrepid characters can discover Volo’s Guide to Monsters within the library, as well as some popular supplements found on the DMs Guild, such as The Malady Codex. 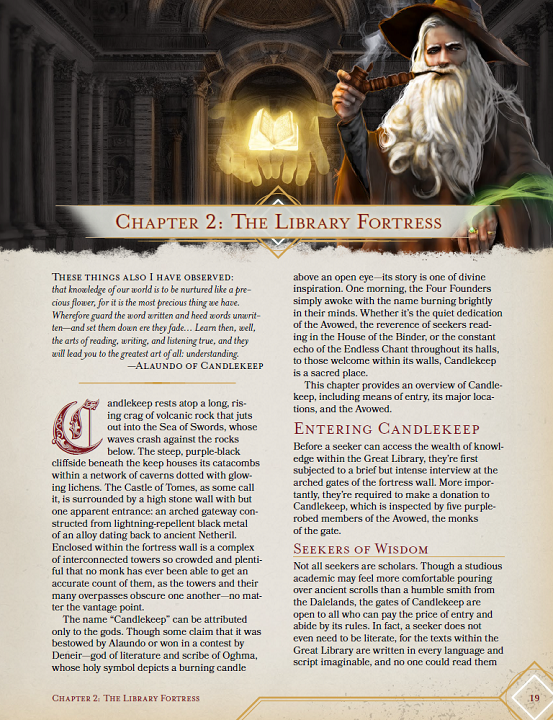 Chapter four offers adventure ideas for parties arriving in Candlekeep, including expeditions to find lost books. For the first time I’ve seen in a supplement, we’re also given Adventure Climaxes, which are ideas for ending your adventure in Candlekeep. I don’t necessarily think of a library, even a cool one like Candlekeep, as the climax to an adventure, but it’s a nice addition. I would’ve preferred fewer ideas and more detail however, as all of the hooks and climaxes include only a few brief sentences.

Those running Baldur’s Gate: Descent Into Avernus are in for a treat, however, as chapter four includes an entire redesign of the Candlekeep segment of that campaign, written by M.T. Black. I went back and re-read that portion of Descent Into Avernus, which is little more than chatting with a wizard, leaving Candlekeep, chatting with another wizard, and entering the portal to hell.

In this “Director’s Cut” version, the party heads to Candlekeep to investigate the puzzle box they acquired earlier in the chapter, as normal. But this time they meet with an entire council of diverse sages (including the polymorphed otter-wizard Traxigorican).

During the fun role-play sequence, demons spill out of the puzzle box, causing pandemonium. The fleeing party must locate Elminster’s Candlekeep Companion, which teleports them to the lair of a silver dragon, who explains the history behind the gate to hell. They’ll need to destroy a grove guarded by a unicorn to finally access the gate to Avernus. Needless to say it’s way more interesting, engaging, and rewarding than the original.

Chapters five and six provide over 20 magic items, over 30 spells, and nearly a dozen NPC statblocks. The magic items are particularly inventive. The Candle of Tomorrow is a single-use vanishing tool, while the Egg of Death spawns a life-like corpse of whomever breaks the egg.

Elminster’s Candlekeep Companion is an incredibly impressive guidebook with an excellent balance of information, lore, and history along with actionable content like subclasses, magic items, and downtime activities. If you’re running Descent Into Avernus, it’s a no-brainer, but even if you’re just visiting Candlekeep in your own adventures, you’d be wise to listen to the Sage of Shadowdale.

The Verdict: With new character subclasses, adventure hooks, and detailed lore, Elminster’s CAndlekeep Companion is the definitive DM and Player Guide to one of the most iconic locations in the Forgotten Realms.