A review copy of “Merchant Class” was provided by the publisher. Find more DMs Guild Reviews on my website and YouTube channel.

I’ve played my share of RPGs and tactics games that include some kind of item-based class. I never though it would work with D&D 5e, but Merchant Class  provides a well thought-out and fun signature class ability, along with six merchant guild subclasses to further define your gold-hungry character.

The Merchant is a half-caster (CHA, of course) with a d8 hit die, simple weapons, and light armor. It’s a support class, featuring a specific list of buffs, utility, and adventuring spells like Animal friendship, Detect Magic, Water Breathing, and Enhance Ability. The Merchant can also give a spell slot to an ally by expending one of their own at a 1:1 ratio, acting as a mobile battery for when your fireballing sorcerer just needs one more fireball, man.

But the real draw, right from level 1, is the Merchant’s Portable Storefront. The Merchant designates a bag, or chest, or whatever, as their magical supply of items, and creates their own shop list with a combined value depending on their level (Level 1 is up to 50gp; level 6 is up to 300gp).

Every time the Merchant levels up, their items are restocked. During a Long Rest, the Merchant can restock items by throwing money into the bag like a voracious slot machine, turning their accumulated wealth into helpful items right on the spot. It solves the money sink issue while giving this class a ton of flexibility and utility.

I was a bit confused by the repeated mention of the Use an Object action, which is almost never actually mentioned in the Player’s Handbook, where magic items (and potions) simply state they use an action to activate their effects. I think the idea behind some of the Merchant abilities is using two magic items in a single turn, or a magic item and a weapon attack. 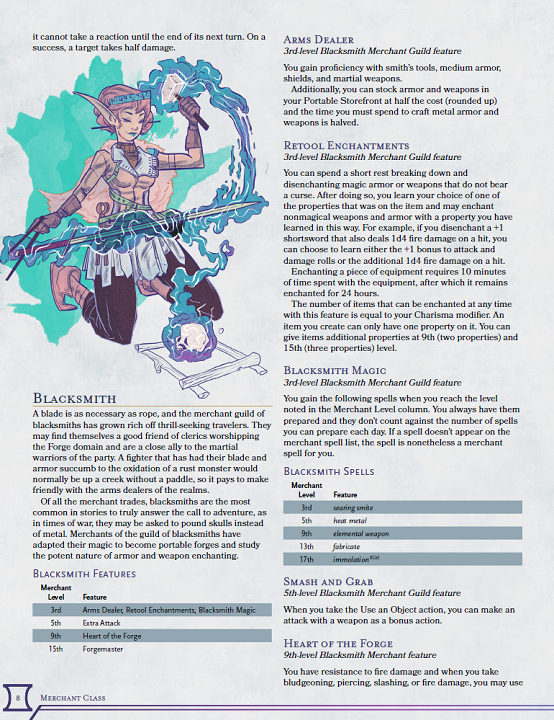 The six subclasses are almost all wonderfully designed and thematically distinct, with the only exception of the Traveler, who has boring Ranger-like travel advantages.

The Alchemist can craft potions and grenades using spell slots, The Blacksmith can salvage magic items and apply their effects to other items, and the Esotericism can stock their Portable Storefront full of spell scrolls and use them to cast spells without any restrictions.

My favorite is the Gambler, who replaces their d20 whenever they make an attack roll, skill check, or saving throw with a standard deck of playing cards. Cards still run the gamut from 1-20 depending on the suit and facing, but each card is discarded after being drawn, giving the gambler greater (or lesser) odds to get future “rolls,” with the option to reshuffle on a short rest. It’s a really neat idea that I wish later Gambler abilities expanded on, the way the overall class does with the Portable Storefront.

Merchant Class also adds four new 1st and 2nd level spells that utilize gold in fun and thematically appropriate ways. Deal damage by flinging a single enchanted gold piece or rain a shower of gold upon enemies; prevent damage using gold (at a 1:1 gp to HP ratio), or gain gold by enchanting a weapon to pilfer it from enemies.

By focusing on items, gold, and item generation, the Merchant looks like one of the more interesting and well-developed new classes I’ve reviewed on the DMs Guild.

The Verdict: Merchant Class takes a single interesting new class feature and expands it through multiple levels and subclasses, resulting in a fun, unique playstyle.

A review copy of “Merchant Class” was provided by the publisher. Find more DMs Guild Reviews on my website and YouTube channel.