High level Tier 3 and 4 campaign modeled after Curse of Strahd, and based on the old Ravenloft module, Web of Illusions. A review copy of “Phantasms of Sri Raji” was provided by the publisher. Find more DMs Guild Reviews on my website and YouTube channel.

Phantasms of Sri Raji is described as a sequel to Curse of Strahd. Don’t get excited about a return trip to Barovia or Strahd’s resurrection, however.

It’s a sequel like the Final Fantasy games. The story has nothing to do with Strahd, but its entire narrative structure, including a magical mist-bordering dimension, a powerful villainous overlord, and a tarot reading that clues the players into critical artifacts and allies, are directly lifted from the popular 5E campaign.

Phantasms of Sri Raja is a high level campaign that begins at level 13, conveniently the level most of the published 5E campaigns like Cruse of Strahd end, and provides a wealth of high-level content to ascend the players all the way to 20 by the final chapter.

The campaign is based on an older D&D adventure called Web of Illusion, which featured the mists of Ravenloft  teleporting Tier 2 parties to the land of Sri Raji, home to an evil Rakshasa ruler.

Phantasms smartly updates, modernizes, and greatly expands that adventure, fixing the lazy (and probably racist) use of Indian gods and culture and utilizing more fantasy and D&D elements, such as an invading, colonizing force of Yuan-ti, who keep their people-eating, snake-headed ways a carefully kept secret – until a classic dinner sequence.

The campaign borrows heavily from Curse of Strahd, and not necessarily to its benefit. It’s fine to draw inspiration from what is widely considered one of the best 5E campaigns, but we didn’t need to do the exact same tarot reading from Madame Magda, with the random sprinkling of artifacts that serve as the flimsy main quest to defeat the overlord of this realm.

In fact, this campaign may actually work better if the party hasn’t ever played Curse of Strahd before. You definitely don’t want your high-level campaign to be Been There, Done That. As I’ve said about CoS, I would suggest not leaving the random artifact locations (and ally) up to chance, but instead strategically place one in each of the major areas featured in the land of Sri Raja. 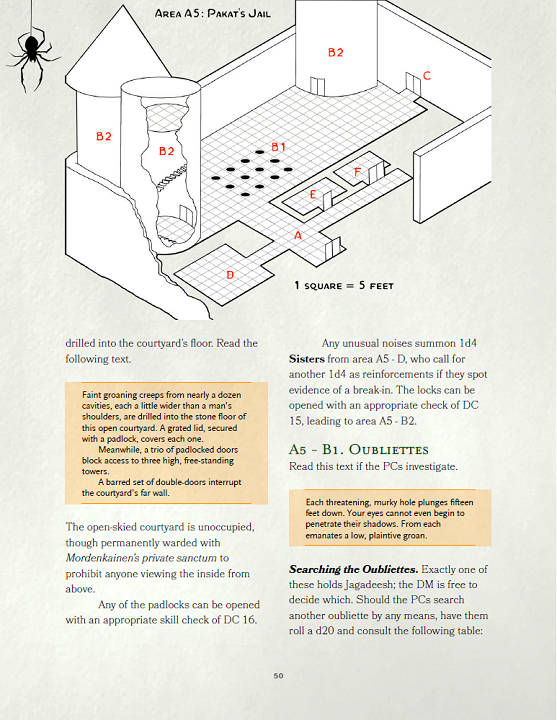 The story is divided into seven chapters, with the first two chapters providing helpful background information on this demiplane, its history, and its competing factions.

The land is ruled by Arijani, the super-charged CR 28 arch-devil rakshasa. The people are in a terrible state of oppression, by both him and his Sisters (warlocks of Arijani), and the invading Ophslanders, who are secretly Yuan-ti snake people.

Chapters 3, 4, and 7 cover the three major areas in Sri Raja, (a town and two cities) each of which features multiple NPCs, quests, and areas to explore.

These chapters pull together memorable and interesting questlines, including a jailbreak heist, a haunted music hall, a demon-possess archmage with a reverse-gravity tower (and mummy entertainers), and the aforementioned dinner sequence with the Ophslanders revealing their gruesome identity.

Chapters 5 and 6 dictate the end game areas (and should have been organized as Ch. 6-7), beginning with the ruined city of Bahur that leads to Arijani’s palace.

The palace is defended by legions of Arijaini’s followers. Chapter 5 includes multiple paths for the PCs to overcome them, including working with or defeating a medusa lich in her lair (and possibly freeing her red dragon captive in the process) or solving a series of puzzles in a different nearby dungeon to unleash a ghostly army. Hey, it worked for Aragorn in Return of the King!

Arijani’s palace is a suitably epic level 20 dungeon crawl, consisting of three major areas, from a monster-filled hedge maze to a trap-filled mirror maze. I especially love the end of the mirror maze, which offers the players multiple mirror doorways labeled “scary” or “very scary” or “not at all scary,” like that sequence from Stephen King’s IT. Each doorway leads to a different epic boss battle, including a kraken, a lich, and a giant chessboard (with chess rules!), with each battle revealing more of Arijani’s backstory.

As much as I love this campaign, it does come up short when it comes to maps. While it does include maps of each town and most of the dungeons, the maps are low quality, and lack color or detail. The dungeon maps are isometric rather than top-down, making them useless for virtual tabletops. The limited artwork is nice, but there’s not nearly enough for a 200+ adventure.

On the plus side, the 30-page appendix is very robust. In addition to all the new monsters and magic items, it also includes player handouts, and itemized inventories of each of Sri Raja’s shops.

Labeling Phantasms of Sri Raja as a CoS sequel, along with its Tarokka reading/item search, forces the constant comparison to the popular 5e campaign. It’s ultimately a disservice, as Phantasms is a high-quality campaign that deserves to stand on its own, and would be an excellent endgame for anyone looking for a much higher level, non-gothic version of Curse of Strahd.

The Verdict: As a proposed sequel to curse of strahd, Phantasms of Sri Raji copies the structure rather than expanding the story, but taken by itself, it’s a remarkably inventive campaign, and one of the best high-level adventures on the DMs Guild.

A review copy of “Phantasms of Sri Raji” was provided by the publisher. Find more DMs Guild Reviews on my website and YouTube channel.