Over a dozen new subclasses specializing in anti-magic, with new rules and spells for counter spelling.

Might vs. Magic is an adaptation of the classic Might and Magic computer RPGs… — bah, I wish! It’s actually a player supplement featuring 14 new subclasses themed around high-magic worlds,  including martial classes with anti-magic traits and abilities, as well as expanded counter spell rules and spells, and new magic items.

The first half of the book includes one new subclass per class, including Artificer and Blood Hunter. Each subclass is designed for a world with lots of spells being thrown around, and wouldn’t be appropriate for a more gritty, low-magic fantasy world.

The Barbarian Path of the Pactbreaker gains resistances and save advantages to different spell schools, and can later ignore defensive magic like Shield and Invisibility. The Fighter gains Anchors that recharge whenever spells are cast (though you have to first choose the school), gaining new defensive, offensive and utility functions, like temporary flight.

For the most part these subclasses feel decently balanced and functional. The Dismantler Artificer’s ability to negate enemy resistance and immunity is incredibly useful, as is the Bard College of Propaganda using Bardic Inspiration as bonus roll to Initiative for the whole party.

Yet very few of these subclasses offer interesting or exciting new abilities. Most of them barely take up half a page, adding passive benefits and bonuses that don’t require much tactical forethought or big moments for the player.

Not every subclass needs to be strategically demanding — Champion Fighter is certainly a thing, and I’m not opposed to adding other straightforward subclasses, particularly to full spellcasters. 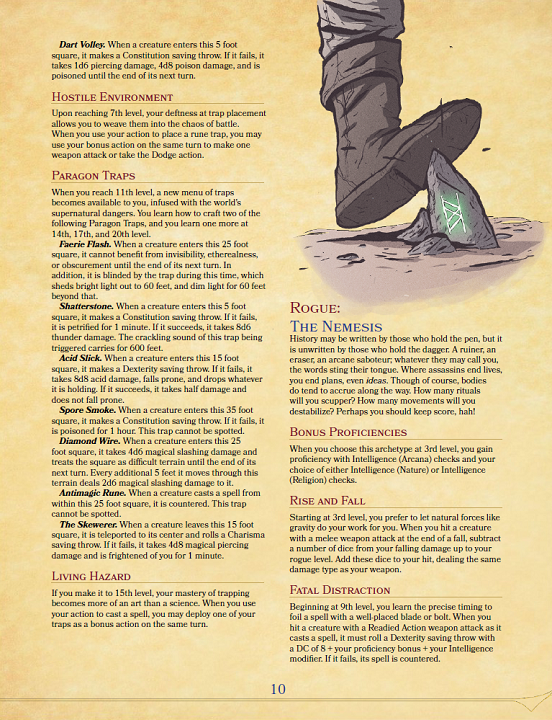 But in Might vs. Magic, only two of the 14 subclasses caught my eye: the Ranger Reclaimer and the Wizard Sage of the Sevenfold Seal. The Reclaimer can craft and deploy primal traps at level 3, choosing two from a list and gaining more as they level up. Traps include restraining webs, poisoned darts, and spike-filled pit traps, leading to some rewarding positioning on the part of the entire team.

The unique Wizard subclass completely forsakes one or two spell schools to cast a malleable version of the 9th level spell Prismatic Wall, creating individual color wards with various functions and abilities. Gaining even a modified 9th level spell at 2nd level seems crazy, but you’re limited to one ward per long rest. Every two levels you gain an additional ward option, and can later cast multiple wards.

The bad news is the mostly ho-hum subclasses take up half the supplement. The good news is the other half is a lot more interesting, providing dozens of new spells and magic items.

The spells continue the anti-magic theme by replacing Counterspell with a series of new countering spells, one for each spell level, with new restrictions and features.

The 1st level Break Spell can counter any spell, but only of a school you name, and must be cast as an action up to hour before you unleash it, using a new Charge system (no concentration required, but limited to one Charged spell at a time). By casting Break Spell at a higher level, you can counter multiple schools in advance.

New higher level counter spells include absorbing, redirecting, and even erasing spells from the minds of enemies, preventing them from casting it again. If this all sounds like some Magic: the Gathering bullshit, it’s because it is. In a neat Design Guidelines post-mortem section, the designer admits to using M:TG as direct inspiration for this new expanded counter spell system.

That could be a lot of fun for fans of the collectible card game. For me, there’s no way in hell I would want to bring any of that craziness to D&D. I like the catch-all Counterspell because it’s easy to use, and spellcasters get enough time and focus as it is. The designer has provided an alternative solution to a problem that I didn’t think needed fixing at all, but I won’t fault them for going all-in with tons of new counter spell options. Still, it feels like all of this counter-spelling could’ve been rolled into a single arcane spell class.

I have zero complaints with the magic items. The dozens of new weapons, armor, and magical items are fun, creative, and interesting. Armor of Echoes can trigger different effects depending on the school of magic targeting the wearer. The Glaive of Decline starts at +10, then decreases by 1 with every attack roll. The Shield of Deniability projects obscuring mists around the wielder. There’s even some humorous items like the Eggshell Walker boots, Talent Scouter monocle, and the Unwelcome Mat.

Compared to the cool subclasses from Tasha’s Cauldron of Everything, such as tentacle-summoning Warlocks, psy-blade wielding Rogues, and Artificers acting like straight-up Iron Man, the mostly mundane options provided in Might vs. Magic aren’t very compelling, even if they’re technically useful and well-balanced. Thankfully the spells, magic items, and overall writing and design of the supplement somewhat make up for it.

The Verdict: The new subclasses in Might vs. Magic are functional but boring, with the real treasure being the expanded Counterspell rules and spells that should delight fans of Magic: the Gathering.