A narrative-focused, fey-themed mini-adventure for levels 5-10.

A review copy of “The Sea Among Fae” was provided by the publisher. Find more DMs Guild Reviews on my website and YouTube channel.

Pirates and fey do not typically overlap. Unfortunately, The Sea Among Fae does a poor job combining its themes, creating richly defined characters and relationships that have little bearing on the mini-quest into the feywild.

The Sea Among Fae is an extremely narrative-heavy adventure. The 20-page adventure is technically designed for Tier 2 (levels 5-10), but there’s only a single combat encounter near the end.

The challenge of designing an adventure for D&D is striking a balance between writing a novel and designing a video game level or quest chain. In this case, the player characters have little to do but wait for events to happen that bring them to the feywild.

The story begins on an intriguing little island with a bustling village full of fun NPCs, with lots of detailed descriptions and role-playing notes. The town’s leader, Desmond, is missing his son, Kidd, though the party won’t even get a chance to meet him until he returns to town that night.

When the party asks around, the only useful information they learn is of a merchant who was last seen talking to the son. Once again the party has to wait around for the merchant to come stumbling in from the forest to meet with Desmond and tell him of a dangerous entrance to the feywild, where he and Kidd and gotten lost in.

That first act is basically six pages of talking to folks and waiting around for the story to happen. It’s one thing to create a story and RP-heavy adventure, but this requires a lot of buy-in from the players to invest themselves in a story where they’re mostly left in the background. 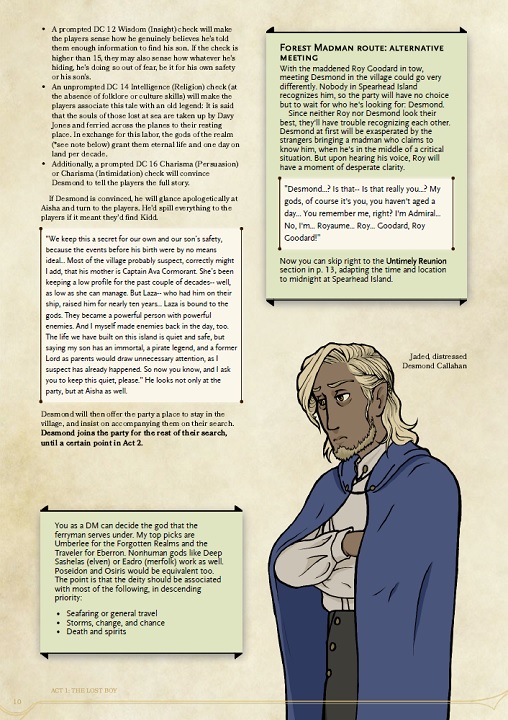 Desmond, the merchant, and the party set off into the woods to enter the fey domain, essentially leaving the pirate theme behind. There’s a lengthy backstory written about Desmond’s polyamorous relationship with a satyr pirate and even Davy Jones themselves, and how Kidd is a product of that relationship, but none of that really matters in the context of this adventure. An appendix includes detailed biographies on all of these characters, but many of them don’t show up until the epilogue, with only Desmond playing a major role.

The fey realm is represented by a forest maze — classic fey-themed dungeon design! Except, there’s nothing really here. No random encounters, no real puzzles. Players need to learn to turn the arrow-shaped rocks in the middle of each room to lift the fog into the next room, and on two of the end rooms are potential magic items via a pond and some vines, but otherwise it’s disappointingly empty.

After the oddly bereft maze, the party stumbles into a clearly and meet their foe, an eladrin elf obsessed with having fun, often at the expense of mortals. She’s captured Kidd, and attacks the players with Stone Cursed and Darkling minions. Thank goodness, an actual fight!

I appreciate the scaling numbers for different party levels and numbers, but it’s literally the only battle in the entire quest.

The elf escapes the battle, leaving the party to rescue Kidd and journey back through the maze. Ah ha, time to unleash some climactic fight on the player, or ultimate hazard!

Er, the fey elf has a 1 in 3 chance of appearing in a room and stealing a player’s memory, then disappearing. This has no mechanical effect on the player, once again requiring a lot of role-playing buy-in. There’s no way to stop or fight her, leaving the party to anti-climactically escape the maze and leave her behind.

The adventure is too heavily scripted and lacking in player agency and choice. It’s also literally too wordy, with long paragraphs of descriptive text and dialogue, and the tiny font is more than a little annoying.

On the plus side, a heavily scripted adventure can lead to a well-designed epilogue. Davy Jones arrives and there’s a big celebratory feast as the family is reunited and the party is rewarded with some very nice magic items (I chuckled at Davy Jones’ Locker Room). The magic items are creative and thematic and the color maps are appreciated, but The Sea Among Fae may serve as a dubious example of why I don’t particularly care for story-heavy adventures.

The Verdict: The Sea Among Fae is so focused on its characters and their mostly irrelevant backstories that it nearly forgets about the ‘g’ in RPG.

A review copy of “The Sea Among Fae” was provided by the publisher. Find more DMs Guild Reviews on my website and YouTube channel.