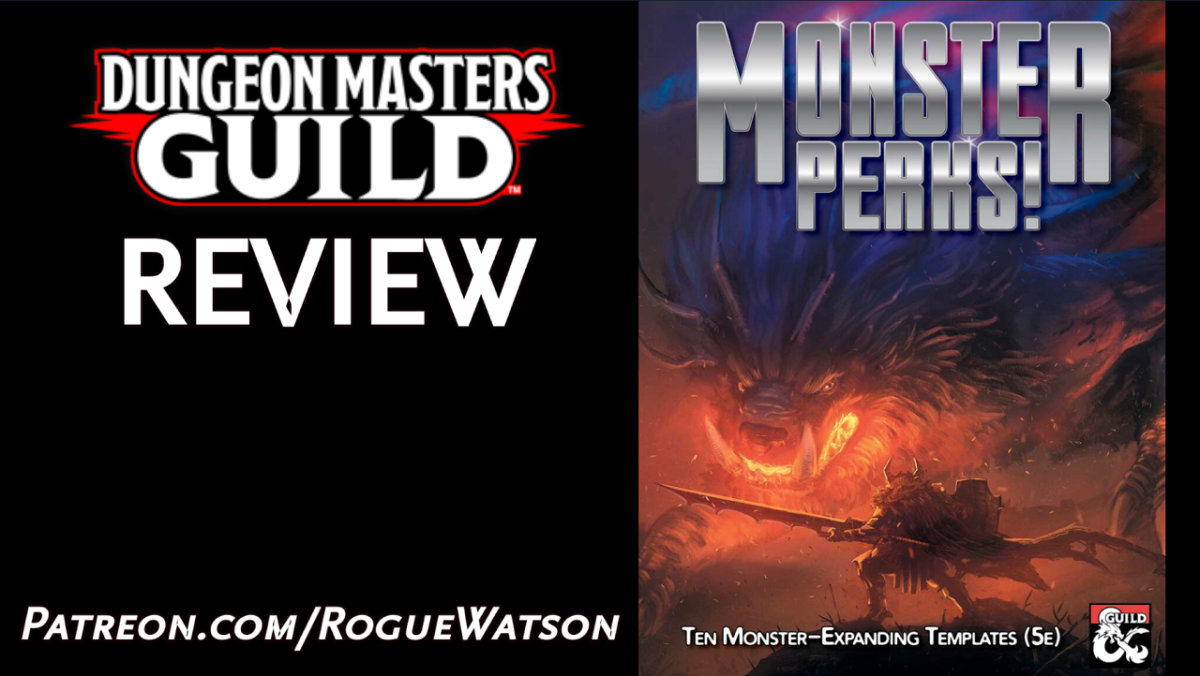 A review copy of “Monster Perks!” was provided by the publisher. Find more DMs Guild Reviews on my website and YouTube channel.

New creature statblocks are fun and exciting, but creature templates can be much more flexible and thematically rewarding. Monster Perks provides 10 new monster templates that expand any base monster from D&D 5e.

The 30-page supplement provides clear and concise rules for layering the new templates on top of existing monsters. Each of the 10 new templates includes two new creature variants, a +1 minion and a +2 boss.

To create a minion, raise the CR by one factor, increasing its hit points according to the flat rate provided in the Hit Point Adjustment table, and apply the new traits and attacks. The +2 boss receives many of the same traits, more hit points, and unique new abilities, including optional boss synergy attacks and traits that can really impress on the battlefield.

Prehensile-tailed is simple and straightforward. All creatures gain advantage on DEX saves thanks to their tail-balance, as well as proficiency in Performance and Sleight of Hand.

The CR +1 minion variant, Blitzer, can wield objects or weapons in its tail (at disadvantage) or gain advantage on grapple attacks. The +2 Stingers have venomous, barbed tails with damage that scales with their CR. And the Boss Synergy is an action allowing the boss to pick up allies and yeet them to safety – or toward the PCs’ backline! 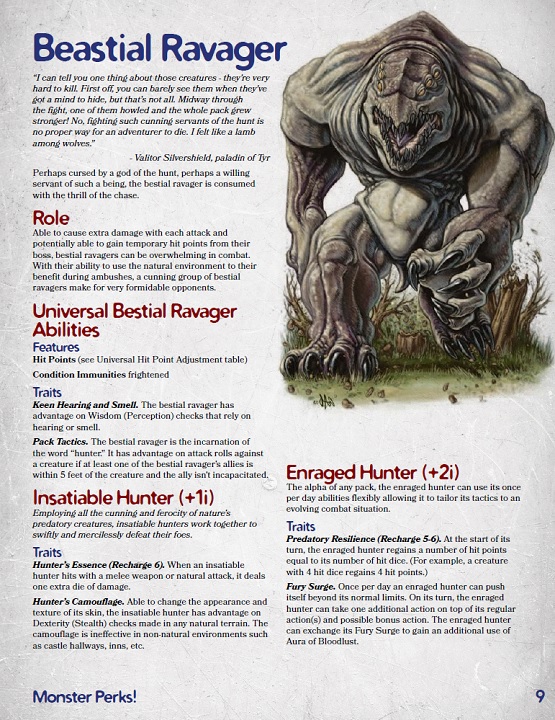 Putrescent is one of my favorite templates, turning any 5e creature into an oozing undead with multiple resistances and immunities. The CR +1 Devourer has an enlarged mouth it can use to engulf its victims and swallow them, dealing constant acid damage, a la a certain cube.

Things get really interesting with the CR +2 Exploder. Taking damage triggers the Disease Bomb reaction, damaging and inflicting disease upon its enemies while healing its putrescent allies. The boss synergy grants the unique Absorb Dead and Grow Tumor actions, allowing the boss to swallow up dead putrescent allies and create new Devourers.

Gradually introducing these unique enemies throughout a dungeon or area (first encountering Devourers, then later adding an Exploder) before finally tackling the enemy-respawning boss is an awesomely memorable difficulty curve.

Thankfully they’re not all physical mutations. Preternatural Illusionists gain shadow-versions of spells, Astral Invaders can teleport and zip around a battlefield, while the awesomely named Void Harbingers (another of my favorites)  summon protective tentacles, inflict madness and confusion, and explode with necrotic damage on death.

Each template also features tactics detailing how best to utilize and synergize all these new abilities. Most of it is obvious for veterans (use debuffs early! keep your ranged spellcasters at range!) but I still appreciate reading through them.

The one piece of information I found lacking are sample creatures and recommended candidates for each template. For example, Spined would work best with melee-focused creatures who excel at grappling or otherwise coming into physical contact with their enemies. But it’s a tiny suggestion in an otherwise fantastic supplement that provides ten thematically satisfying reasons to dust off old monsters.

The Verdict: Monster Perks has Simple and effective rules for upscaling any base 5e monster, along with ten creatively interesting templates with new abilities, traits, and synergies.

A review copy of “Monster Perks!” was provided by the publisher. Find more DMs Guild Reviews on my website and YouTube channel.