Save a small town from some undead in this tier 1 adventure designed for 3rd level. 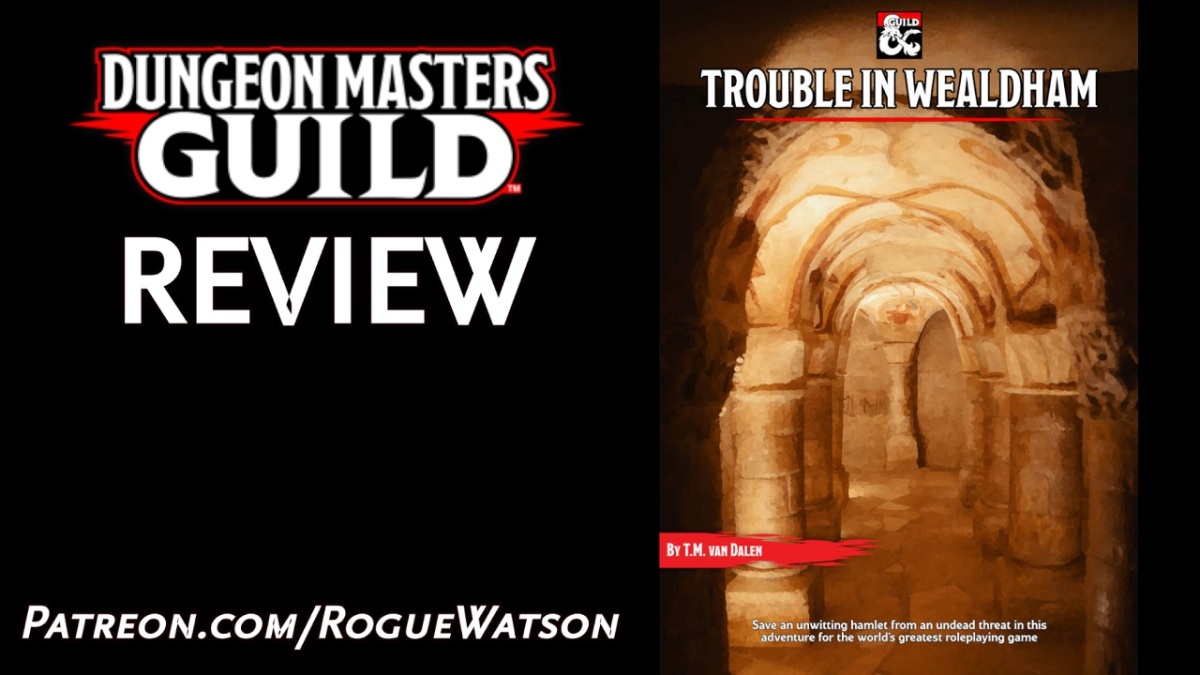 A review copy of “Trouble in Wealdham” was provided by the publisher. Find more DMs Guild Reviews on my website and YouTube channel.

Trouble in Wealdham isn’t an official Adventurer’s League module but it may as well be. At 20 pages it’s a relatively short and aggressively straightforward adventure designed for tier one, as our heroes are sent to a small town to investigate some recent problems.

A villainous necromancer, Faurius Besk, has invented an orb that raises undead. He placed the orb in a crypt near our titular town and then… simply sits back and watches events unfold. The villain doesn’t play any kind of role in the actual adventure, and the undead lack motivation other than to go our and wreck havoc, leaving little in the way of storytelling or plot development.

The first chapter opens with the PCs on the road to Wealdham from Waterdeep. Optional player backgrounds can tie new PCs into their faction patron of Waterdeep Academy (and thus each other) but they’re not particularly interesting or noteworthy (e.g. I always wanted to be a cleric adventurer – so I became one!).

The town is detailed in chapter two, and includes a blacksmith, and inn, an herbalist, and a trading post. The party is free to explore and chat up the townsfolk, learning some rumors about vandalized gardens and farms, and strange lights at night. 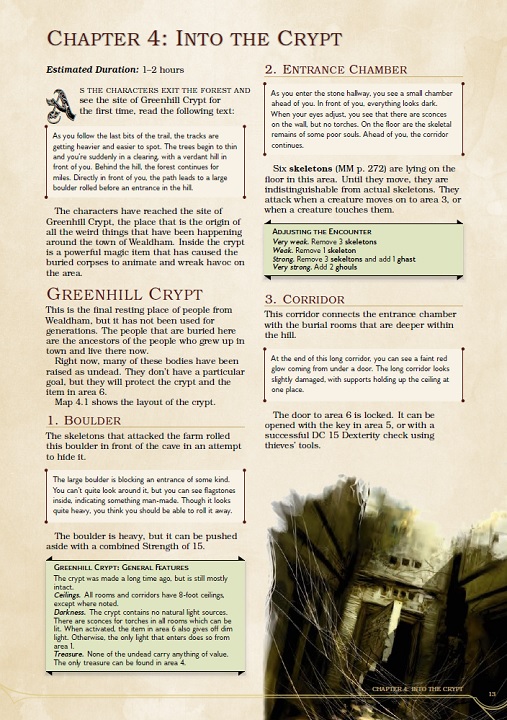 Unfortunately there’s nothing for the party to do to move the story forward. Nothing happens until they sleep for the night, at which point a farm is attacked by skeletons and crawling claws, and the party can rush to defend it.

It’s not exactly a challenging fight. The adventure is supposedly optimized for third level, though adjustments for each combat encounter are detailed for levels one through four. Afterwards the party is even given a chance to get a long rest before following the trail that leads to the nearby crypt.

The crypt features six rooms, and thankfully a full color map. It’s mostly a generic undead dungeon, though I do like the skeletons in animated armor with flying swords (I would add the skeletons popping out and attacking after the armor is defeated).

The final room contains the floating orb, and another big undead fight. Deactivating the rob requires solving a trial-and-error puzzle of pushing sigils on the orb, while fighting off undead.

That’s a neat idea, though it might have been better served by creating waves of undead, adding as sense of urgency to finishing the puzzle. Otherwise the heroes can simply defeat the undead, then turn their attention to solving the puzzle.

With the orb deactivated, the heroes return to town and to Waterdeep, having learned nothing about why any of this was happening, or who was the culprit. While it’s well-organized and easy to run, Trouble in Wealdham is far too generic in its structure and dissatisfying in its narrative design to make for a memorable adventure.

The Verdict: Trouble in WEaldham is a competent, straightforward, and ultimately forgettable low-level adventure

A review copy of “Trouble in Wealdham” was provided by the publisher. Find more DMs Guild Reviews on my website and YouTube channel.