100 traps, alarms, barriers, and illusions to torment your players with.

A review copy of “Traps, Trammels, & Triggers” was provided by the publisher. Find more DMs Guild Reviews on my website and YouTube channel.

Traps are a classic component to any dungeon, and thus a staple of D&D adventures. Yet I review lots of monster supplements, and very few supplements devoted to traps.

Traps, Trammels, & Triggers is all about traps, offering 100 different trap designs, from simple pits to hallucinogenic fields of flowers.

With 50 pages of traps, it’s easy to expect quantity over quality. For the most part these are relatively simple and straightforward traps, many of which you’ve probably seen before if you’ve run at least a few official D&D campaigns. But it’s nice to have so many traps within a single well-written supplement.

Traps are organized alphabetically, and though an introduction page states the obvious DM level-scaling that occurs with any trap (changing the DC and damage to appropriate levels), the traps themselves aren’t organized by level or complexity.

Just because you can scale a trap with the numbers, doesn’t mean every trap is appropriate for every tier of play. A pit trap is great for low level, but doesn’t mean much for higher levels when players have access to flying and jumping spells, and several nice magical items.

On the other hand, we should probably stay away from using anti-gravity chambers with ceiling spikes for level one PCs. 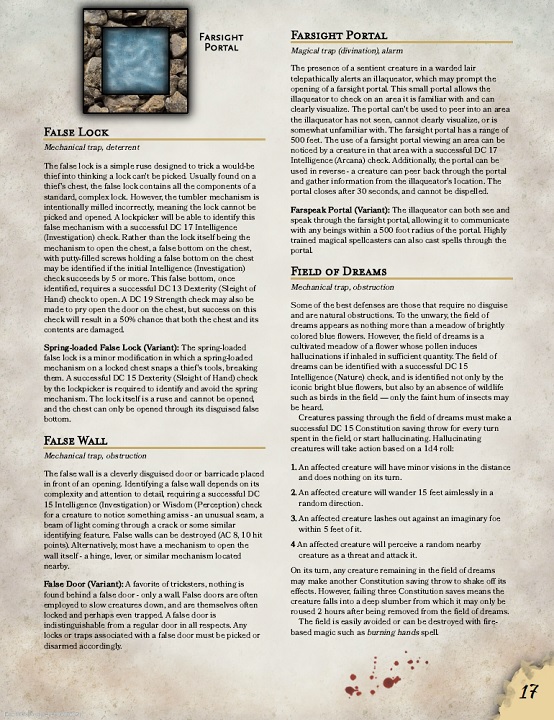 But there are plenty of cool new ideas as well. Bone Storm animates a section of bones not into undead skeletons, but into a cloud of swirling, damaging bone pieces — when placed on undead creatures, creates exploding skeletons!

Grasp of the Dead is triggered when picking up an enchanted book. A rotting hand reaches out, and you must grasp it to open the book and flip through its pages. While holding on, you have to make Wisdom saving throws or take psychic damage from the ghoulish handshake.

Other interesting traps include the Mirror of Virtue, which punishes evil-aligned PCs and buffs good-aligned ones, the Reliquary of Frost, which deals damage and slows you down as you try to approach it (then tries to grasp you in icy tendrils), and the Unholy Blessing, which heals and buffs you initially, before bestowing terrible curses as the hours pass, eventually vomiting up a homunculus!

Nearly every trap features several variants, altering its damage or effects in different ways. The Corpse Wall deals necrotic damage when trying to climb the mass of bodes, but an animated corpse wall bites back. The Ice Gyve (chained shackles) restrains a creature and deals ice damage, but can be modified to deal fire damage, psychic damage, or inflict the effects of the Slow spell.

The Field of Etherealness can turn trespassing creatures incorporeal, with variants that teleport, frighten, or even phase you into another plane of existence.

Although I love traps and environmental hazards for satisfying the exploration pillar of D&D, there was a missed opportunity to combine some of these traps with other traps, and/or hostile encounters.

For example, the Field of Dreams causes hallucinations that don’t matter all that much if you’re not in any immediate danger. What if you also had to fight some kind of plant monster or construct? Or maybe an enemy force of goblins, where both sides are suffering from the effects? Some sample encounter combinations would have gone a long way to fleshing out the possibilities.

The Verdict: From swinging scythes and binding shackles to preserved beholder eyes, Traps, Trammels, & Triggers has enough ideas and varieties to make even John Kramer satisfied.

A review copy of “Traps, Trammels, & Triggers” was provided by the publisher. Find more DMs Guild Reviews on my website and YouTube channel.